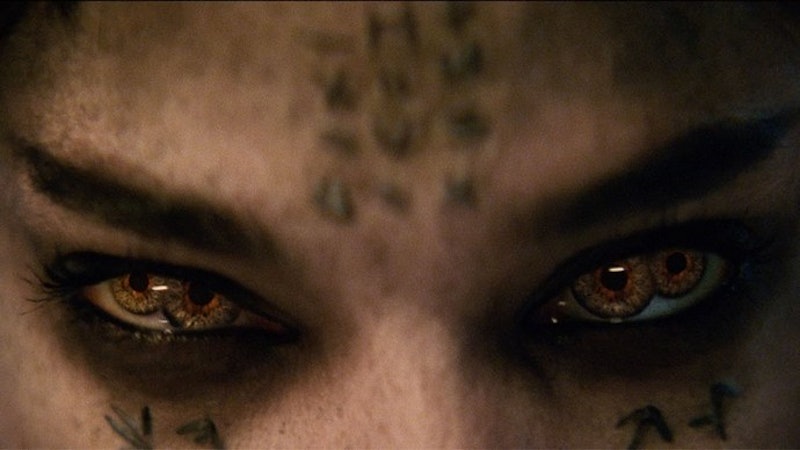 You may feel like we only just left summer behind a couple of months ago (and you'd be right), but it's never too early to start looking forward to the big blockbusters that will be coming our way next time the weather warms up again. In that spirit, Universal has dropped their first official look at their upcoming 2017 reboot of their beloved 1999 reboot of their classic 1932 monster film about a desiccated Egyptian sorcerer… and the new Mummy teaser actually looks pretty promising, hinting at a fresh take on the familiar story.

Those who follow the world of movie news likely already heard the reports that this time, the titular undead creature — previously played by Boris Karloff and Arnold Vosloo — will be different in one pretty significant way: the Mummy is now a woman. Rather than the high priest Imhotep that audiences are familiar with, the cursed figure in question will now be an ancient queen played by Sofia Boutella, who you may have seen kick ass and take names as the razor-legged assassin Gazelle in Kingsman: The Secret Service or as the alien warrior Jaylah in Star Trek: Beyond.

Just in case you had missed this particular piece of exciting casting news, the teaser puts the information front and center. Before barely even a second of footage has passed, Tom Cruise — who also stars in the movie as a Navy Seal named Nick Morton on assignment in Egypt when the Mummy is awoken — can be heard saying, "I saw her. She's real." The teaser then cuts to a shot of Boutella's eyes, as both of her pupils eerily split in two.

But the mere presence of a female monster isn't the only thing that seems to set this Mummy apart from its predecessors. The swashbuckling Indiana Jones-esque tone that fans may remember from the 1999 version has apparently been swapped out for a more urgent, real-world atmosphere, with archaeologists replaced by soldiers. The tagline ("Welcome to a new world of gods and monsters") also promises a scope larger than the previous self-contained trilogy had, since this reboot will also serve as a launching pad for a new "cinematic universe" of interconnected monster movies.

You'll notice that, right before the teaser flashes the phrase "And Monsters," we're treated to our first shot of the character played by Russell Crowe. That timing is no coincidence, since the character that Crowe is playing is none other than Dr. Jekyll himself. Whether or not we'll actually see Jekyll's monstrous alter ego Mr. Hyde in this movie remains to be seen, but either way it seems clear that this movie is setting him up for continued appearances in the franchise.

Hopefully, The Mummy does well enough that we can see this intriguing new world of gods and monsters actually come to fruition. Of course, it's hard to tell from a teaser alone, but it looks like this new Mummy is heading in an intriguingly fresh direction.

If those 15 seconds of footage weren't enough to sate your hunger for monster mayhem, don't worry — the first full trailer will be dropping this Sunday. Then you can feel the wrath of the Mummy herself when the movie premieres on June 9, 2017.