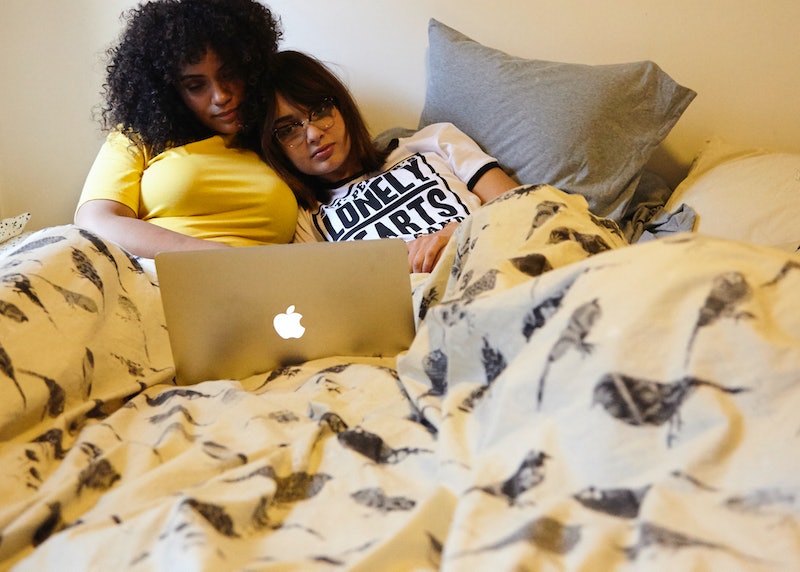 If you weren't already talking about feminism with your partner before this year, you probably are now that Donald Trump is president-elect. Feminism has obviously been a much-needed movement for a long time, but the presidential race between Trump and Hillary Clinton dragged the many continued issues with sexism in American culture straight into the spotlight. It's no secret that Clinton was treated differently than other presidential candidates because of her gender; Trump himself pointed it out when he attributed her success to playing the "woman card," implying that she received votes for her gender rather than her qualifications. Then there was, well, everything Trump said about women during his campaign, as well as accusations of alleged sexual assault from numerous women prior to the election. (Trump has denied these allegations.)

It was hard to avoid talking about gender and race issues this year, and that's not likely to change after Trump takes office on Jan. 20. But if you've managed to avoid discussing gender equality with your partner so far, you may want to start because it's probably going to come up eventually. Here are five reasons to talk to your romantic partner about feminism sooner rather than later.

Sexism Is Still A Problem

American society hasn't overcome sexism any more than it's overcome racism. Between rape culture, online harassment, street harassment, and all both the minor annoyances and major issues that build up over time, sexism is everywhere. If your partner isn't already aware of this, they're impressively oblivious or don't want to notice — either way, you'll probably want to see where they stand.

Reproductive Rights Are In Danger

Nobody's going to be taking away the right to vote anytime soon, but it's highly likely that the right to an abortion will become even more restricted in the near future. Between Trump's promises to elect a pro-life Supreme Court judge, Mike Pence's ongoing war on Planned Parenthood, and the restrictions already put in places by some states, abortion access is in danger. If you're able to get pregnant, it's best to know how your partner feels about abortion in the first place; the same is true if you're not able to get pregnant, but your partner is. Either way — and in pretty much every other case — it's especially important to know where you and your partner stand, considering the difficulties many people are likely to face if they need one after Trump takes office.

Feminism might be less of a taboo word than it was a few decades ago, but its definition is still unclear to some people. According to a 2013 YouGov poll, less than a third of Americans would call themselves feminists, but when they were provided the dictionary definition, that number jumped to 57 percent. If you're dating someone who doesn't already call themselves a feminist, they might be familiar with a flawed definition of the word.

It Will Come Up Eventually

If your relationship is still in its early stages, you may not want to get into the divisive stuff yet, and that's totally up to you. But their feelings on equality, and feminism by extension, are going to come up eventually; aside from their interactions with women and non-binary people (and men — because feminism is for everyone), it can influence everything from the division of chores and childcare to how much you're both making. I don't know about you, but I'd rather not find out three years into a relationship that someone expects me to put their career aspirations ahead of my own.

It's A Much-Needed Relief

Most of the above points are operating under the assumption that your partner hasn't identified as a feminist. But if you're both feminists already, you know that complaining about sexism with someone who understands is a huge relief.

More like this
The Best Time To Date After A Breakup, According To Experts
By Bustle Editors
20 Things You Should Never Tolerate In A Relationship
By Rachel Sanoff and Kathleen Ferraro
12 Ways You're Sabotaging Your Love Life
By Teresa Newsome and Lexi Inks
Virgo & Sagittarius Zodiac Compatibility, According To Astrologers
By Kristine Fellizar
Get Even More From Bustle — Sign Up For The Newsletter