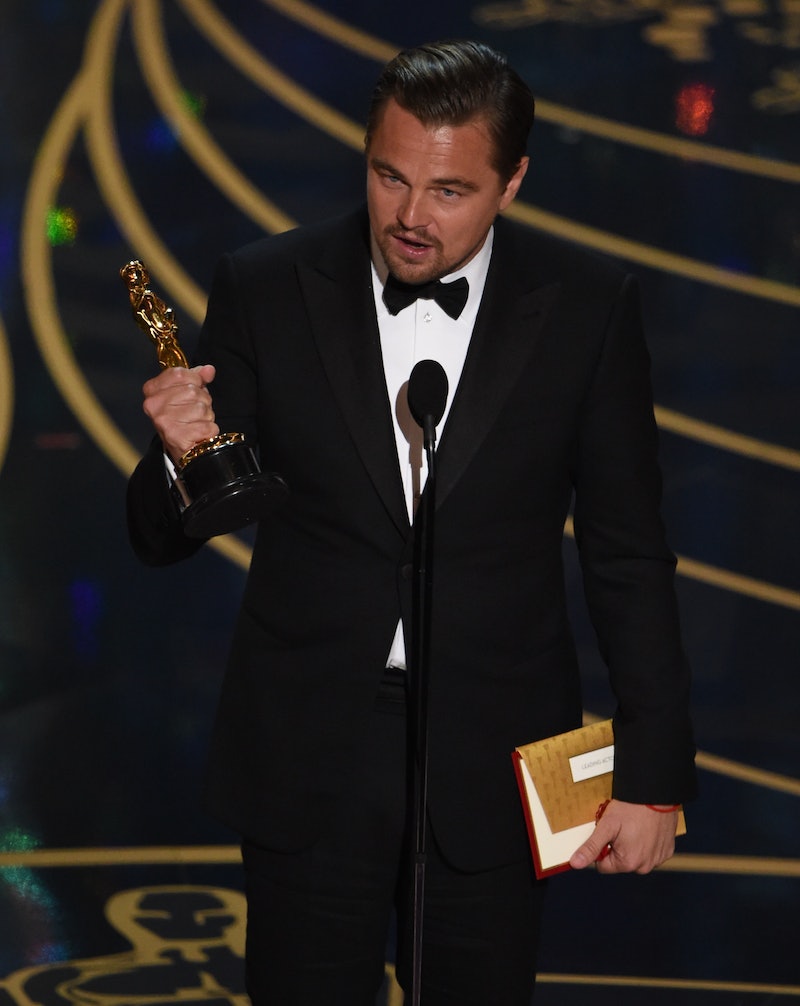 The way I see it, the only upsides of the disaster that's been 2016 can be summarized in the following categories: the incredible memes depicting the sh*tshow of a year and Leonardo DiCaprio's Oscars win. Call me sentimental, but now that this godforsaken year is coming to a close, I can't help but reflect on the one shining moment that everyone's already forgotten about, because, well, 2016. Before the presidential election chaos ensued and Ryan Lochte was peak Ryan Lochte, there was an unmatched beacon of hope presented back on Feb. 28, 2016. That was the day when DiCaprio, after three decades of serving the public with top-notch entertainment and ridiculously good looks, took home his first well-deserved, shiny Oscar. Before this year crushed America's soul, the actor's overdue victory happened and it shouldn't be overlooked.

Formerly an Oscar underdog, DiCaprio is a true American hero. After 30 years in the business, countless immaculate performances, and five Oscar nominations, he stuck it out and took the gold for Best Actor in The Revenant at age 41. Not only did the actor's win make the American public collectively weep of happiness, but he was selfless enough to make his highly-anticipated Oscars speech about the seriousness of global warming. Seriously, what a godsend.

Perhaps the greatest outcome of this moment was the brilliance of GIFs and memes birthed on the web, because such positive notions on the internet are few and far between. Here are a handful, since I'm really getting nostalgic.

One that depicts exactly how the world felt in that moment. I watched my TV that night looking just like the guy in the blue tie.

I'm pretty sure everyone walked into work the next day like this:

Although Facebook didn't actually create this life event for users, all is forgiven because DiCaprio won, remember?

Not remembering Titanic on that evening would've been a travesty. I hope he hugged his Oscar that night in the warmest of embraces.

Champagne tasted a lot sweeter on Oscar night. For DiCaprio and the world.

But what still tugs at my heart strings is how modest the actor was after his win. In interviews following his victory, DiCaprio admitted the moment was "surreal" and told reporters backstage, "This has been my dream ever since I was 4 years old." This pure joy in this moment says it all:

And in all seriousness, DiCaprio's big win feels like the last time America was actually united in something. When he won, the people felt like they won too — fans of his or not. Strangers all over the country suddenly became cheerleaders rooting for the same team and the internet produced an outpour of excitement and faith. If only DiCaprio would've ran for president. But for now, long live the 2016 Oscars.

More like this
Remember When Benedict Cumberbatch Announced His Engagement In A Newspaper Ad?
By Hugh McIntyre
Tom Cruise Gives His Honest Review Of Lady Gaga’s New Song For 'Top Gun: Maverick'
By Hugh McIntyre
Regina King Puts Her Career, Family, & Friends Before Romance
By Jake Viswanath
You Can Thank Spider-Man For The Meme-ification Of Movies
By Dana Schwartz
Get Even More From Bustle — Sign Up For The Newsletter