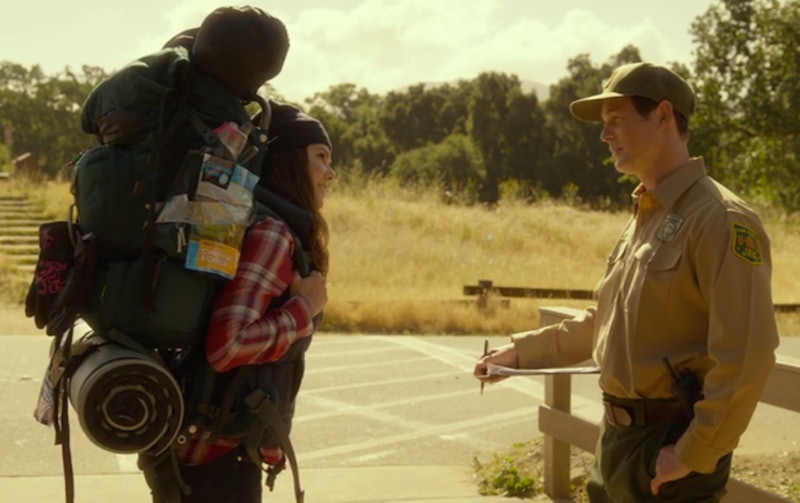 Tucked inside of Gilmore Girls: A Year in the Life was a mini-Parenthood reunion that created the TV equivalent of a Turducken. Only instead of poultry there were wonderful cameos by beloved actors designed to make fans of both shows spazz out. The best Gilmore Girls revival cameo goes to Peter Krause for his no-nonsense park ranger who blocked Lorelai from the certainty of sudden death her camping trip was destined to cause — the woman duct-taped trail mix to her pack, people. According to People, though, Krause's cameo would never have happened if Lauren Graham had not been so insistent her real life love and former co-star was the man for the part.

As People reports, during a talk with Michael Ausiello while promoting her new book Talking As Fast As I Can in New York, Graham revealed she is the reason the park ranger role was split into two characters. When The Catch rewrites derailed plans for its star, Krause, to be on set for both days of shooting, Graham convinced series creator Amy Sherman-Palladino to include two park rangers instead of one. Then Graham convinced another former Parenthood co-star, Jason Ritter, to step in the play the new ranger on the day Krause was not available. While Sherman-Palladino was initially reluctant to have Lorelai encounter two different rangers, the gag not only worked, but added an extra layer of meta goodness to the revival. Everyone say a big thank you to Graham for making two hilarious and poignant reunion scenes in "Fall" possible.

"I was obsessed with Peter playing park ranger," Graham told Ausiello. "It was so difficult to work out and I was obsessed with it beyond a healthy degree." All I have to say is, thank goodness Graham would not let the idea go. Having Krause's character be the one who steered Lorelai away from her Wild adventure and toward a closed coffee shop gave the scene an extra layer of meaning. The weight of the scene did not come from Krause and Graham being a real life couple (that was just a fun bonus), but from the shared Parenthood history the two actors have.

On Parenthood, Krause and Graham played brother and sister Adam and Sarah Braverman, and Sarah often needed guidance from her big brother when her life got too complicated. Having Krause play that role for another Graham character, even if it was accidentally on the part of the ranger, was a beautiful nod to Graham's other iconic single mom. As for having Ritter play the first ranger, well, that was simply Graham's brilliance and commitment to both her Gilmore Girls and Parenthood families shining through.

Knowing the story behind the two park rangers with the familiar faces is only going to make your inevitable Gilmore Girls revival rewatch richer. The revival was a passion project for all the actors, and Graham went out of her way to make sure she could share the experience with Krause, Ritter, and her onscreen Parenthood daughter Mae Whitman, as well as her Gilmore Girls cohorts. The rangers stand as a testament to just how much Graham loved being Lorelai and Sarah.