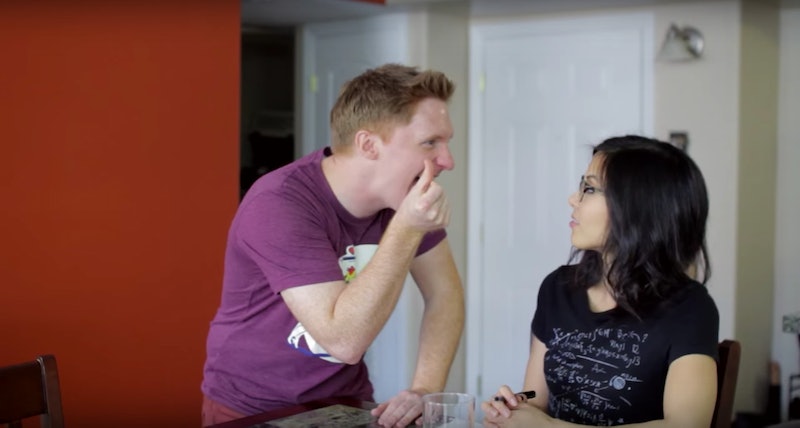 People, especially women, often fear that by extricating themselves from a conversation, they're being rude. Anna Akana's video "When It's OK to Speak Up" shows one scenario in which she felt this way, and it's one many women are familiar with. She's trying to eat lunch alone, and a guy attempts to pick her up. And though she uses a technique to get him to leave that many of us are also familiar with — telling him she's taken — she knows she shouldn't have to. Although our culture often teaches us otherwise, asserting boundaries isn't rude; disturbing someone else when they don't want to be disturbed, however, is. And it's worth not only reminding ourselves of that fact, but learning to speak up when necessary.

In the video, after Akana mentions she has a boyfriend named "Brad," after which the stranger tells her he knows she's not lying because she didn't hesitate to give the name. The implication is that this behavior isn't unusual for him, meaning that Akana is far from the only person who's ever had to deal with him pulling this stunt.

She fantasizes about the ways she wanted to respond: First, she imagines analyzing him as a scientific subject, asking him if he would self-identify as a "douche-bagel." Then, she thinks about telling him he should have approached her with something more like, "Oh, I’m so sorry to interrupt what appears to be your alone time. But I saw you, think you’re very attractive, and I’d like to get to know you better. Would you like to go out for a drink sometime?", rather than "Who’s your guy?" or "You know how I know you’re not lying?"

Then, finally, she settles on this kind but assertive response: "I'm really sorry, I don't want to be rude, but this is time that I've set aside to be alone and think and I would just like to eat my lunch in silence, please." In this imagined situation, he seems annoyed but leaves without bothering her.

"It makes me think about all the times we bend over backwards to try to make someone feel more comfortable even though they’re the ones making us feel uncomfortable," she comments at the end. "Do you notice that in your life? Do you expend a lot of energy trying to make life easier for everyone else? Even if it infringes upon yourself?"

This is certainly something I relate to, and this video made me ask myself: Why can't we always respond the way Akana did in the last version of the scenario?

I think one reason, at least in my own experience, is that we're made to feel like bad people if we hurt someone's feelings. We're taught that it's our duty to accommodate people who want something from us. This stems from a broader idea that women exist to please others, especially men.

This idea is often already in our own heads, and some people — particularly self-proclaimed "nice guys" — will bring it up themselves to manipulate us. I remember a date once asking me if I wanted a second date, and instead of lying and breaking it to him later, I said I wasn't sure if we had much in common. Then, he talked about what a "nice guy" he was and how he was always getting rejected for no reason and deserved another chance. By evoking this notion that I was being unkind if I didn't give him what he wanted, he talked me into a second date. Yet if I had lied to him and told him that I would date him again in order to avoid that argument, he could have criticized me for being dishonest. It's a lose-lose scenario.

This message can have even more harmful consequences than causing someone to go on a date they're not interested in. It can pressure them into sex when they don't want it, lead them to make major life decisions to please others rather than themselves, and eventually lead them to believe that what other people want from them is more important than what they want.

Another reason we may not speak up in these situations is that some people may actually retaliate. Using the hashtag #NotJustHello, many women have revealed that the consequences to standing up for ourselves can be worse than someone getting a little annoyed. One wrote about getting a death threat, some have been called misogynistic slurs, and one was physically grabbed. Some women have even been physically hurt or killed after rejecting men.

As Akana points out in this video, it's always OK to say "no" to someone else in order to say "yes" to your own needs. But instead of just telling women to say "no," we also need to create a culture where people understand it's never OK for anyone to try to force a "yes" out of anyone — in any situation.