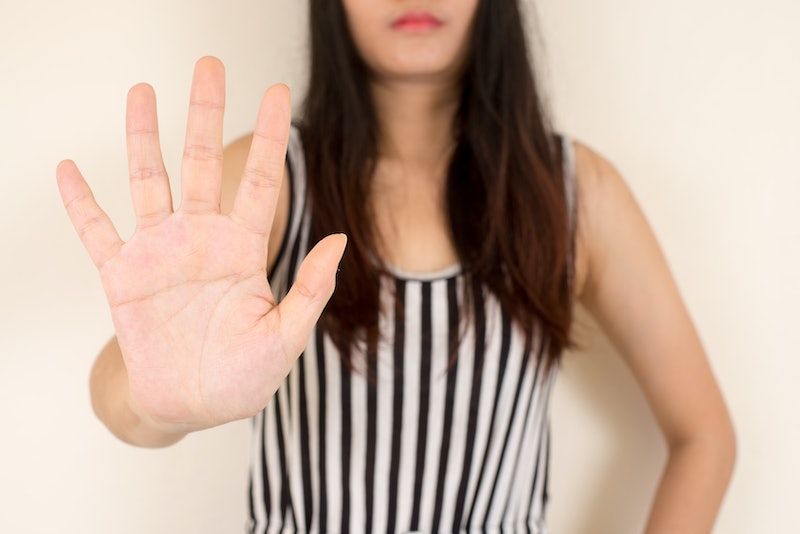 It's all too common for people to realize they've been sexually abused after the fact. The societal stereotype of what sexual misconduct looks like is very narrow, which often leaves people confused as to whether or not they have been victimized. Once you recognize the signs your partner is sexually coercive, though, you may realize that behaviors you dismissed as normal, not their fault, or a misunderstanding are actually unacceptable.

Sexual coercion, according to Band Back Together, is "the act of using subtle pressure, drugs, alcohol, or force to have sexual contact with someone against their will." Coercion can be exerted in a number of ways, but the end result is always that you end up engaging of some form of sexual activity when you don't really want to.

Rape culture teaches us to view such coercion as inevitable and acceptable. One study by the organization Our Watch found that a quarter of girls ages 12 to 20 agreed with the statement, "It is normal for guys to put some pressure on girls to do sexual things." We're taught to view "putting pressure" as a category separate from assault. "Legitimate rape," we're told, occurs when a strange man whom a woman has not slept with before or shown any interest in uses physical force to make her have sex in its most traditional definition with him while she kicks and screams. But in reality, rapists and victims can both be of any gender, the victim doesn't always "fight back," a wide variety of acts outside the narrow definition of "rape" can be coerced, and a rapist is most often someone the victim knows. In fact, according to the National Intimate Partner and Sexual Violence Survey, over half of female rape victims say the perpetrator was an intimate partner.

So, here are some sexually coercive behaviors that are never OK for anyone to engage in.

While couples absolutely should be able to discuss how they feel about their sex lives, guilting someone into having sex when they don't want to is coercion. Incompatible sex drives are an issue in many relationships, and this is something couples can work through together, but nobody should ever be made to feel bad about not wanting sex at any given moment.

2. They've Continued When You Wanted To Stop

Saying "no" after sex has started is the same as saying "no" before it starts. You have the right to stop at any time, and there is no physical reason why your partner can't (if they say they can't stop due to "blue balls," run in the opposite direction!). If somebody keeps going after you've said you're uncomfortable or not into it anymore, they've assaulted you.

"No" is not a challenge. It doesn't mean "try again." It doesn't mean they just need to get you in the mood or convince you or "lower your defenses." If you're not feeling it at the moment, your partner should respect that and agree to do something else.

4. They've Implied That You Owe Them Something

If your partner ever tries to convince you that you're wrong to deny them something after you're gotten naked with them or received a sexual favor from them or done anything, they're being coercive. You don't agree to anything unless you explicitly agree to it.

5. They're Not Respecting Your Contraception Preferences

If you agree to sex with someone on the condition that they use contraception and then they have sex with you without it, you still didn't consent to the type of sex you had. Your own physical health and safety is non-negotiable, and while both members of a couple can decline to use a method themselves, both members can also decline sex if they don't feel adequately protected.

6. They Move Things Forward Without Consulting You

If your partner tries to take a sexual encounter to the next stage — e.g., gets up to get a condom, takes off your clothes or their own, or touches you somewhere they weren't previously — without any indication from you that this is something you want also, they may not be trying to pressure you, but that's the outcome. They may think you want it too and prefer to avoid communicating, but that's never a safe assumption, which is why clear communication is so important.

Since communication in the bedroom is still often viewed as embarrassing or unnecessary, many sexual relationships go like this: Someone tries something, then the other person either goes along with it or asks them to stop. The problem with that is, if you're not okay with something, you may not feel comfortable telling them to stop, and even if you are, you're still doing something you don't want up until the moment you stay "stop." This type of relationship can also lead people to do things they're not really enthusiastic about but are OK enough with to not protest. But just being OK with something does not constitute enthusiastic consent.

8. You Consent Because You Feel Like You Have To

"Consent" isn't really consent unless you're, well, consenting to consenting. If you consent because you feel like it's your duty to fulfill your partner's sexual needs or they'll be unhappy if you say "no," the encounter isn't truly consensual. And if they're making you feel obligated to do something or afraid to say "no," they're being coercive.