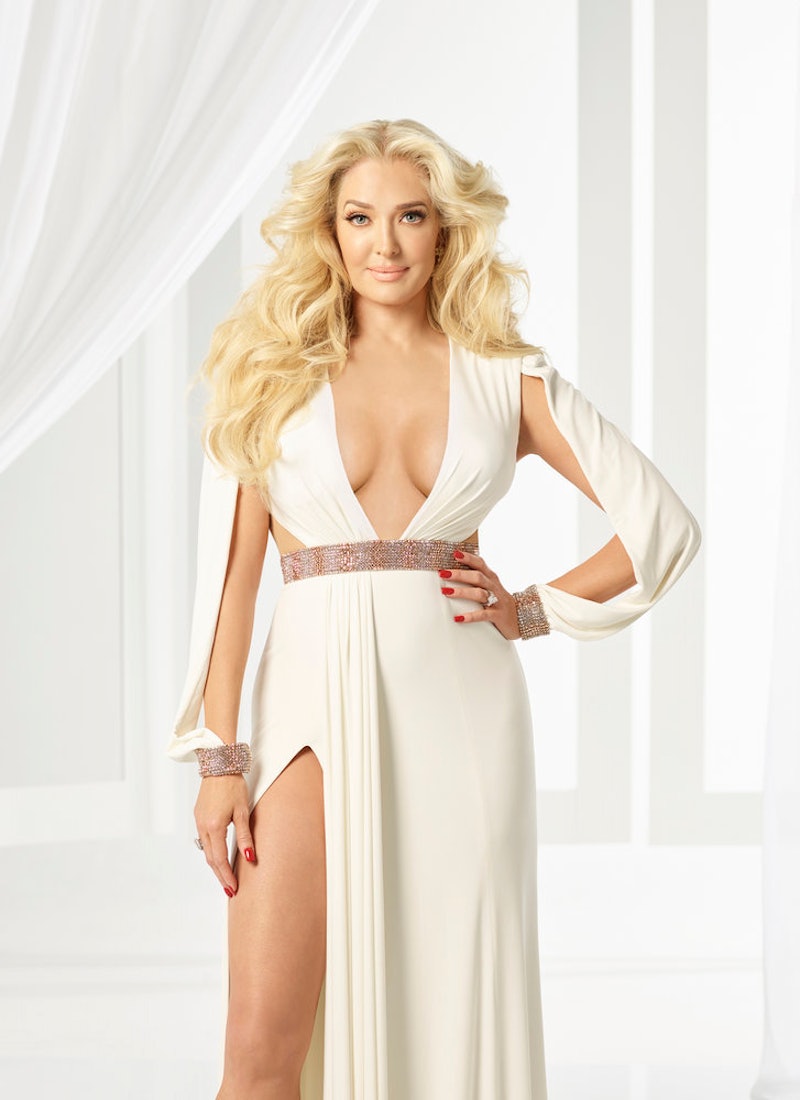 After what can only be described as an extremely stressful Season 6 (for both the cast and the fans), Erika Girardi promises a lighter Real Housewives of Beverly Hills Season 7. While chatting with Bustle, Girardi, aka "Erika Jayne," says viewers do not need to worry about any Munchausen syndrome talk, unlike last season where Munchausen rumors about Yolanda Hadid and her Lyme disease became the main focus. "Yes, we have," she says if everyone has moved on from the topic of conversation started by Lisa Rinna. "Last season was very heavy related to Yolanda's illness and all of that stuff."

Thankfully, the "Pretty Mess" singer promises this season is filled with much more laughter than drama, though the latter certainly isn't avoided. "This season is different in that it's a lot of fun, a lot of travel, a lot of lifestyle, and of course, the bumps in the road." However, she adds, "[It is] a much more lighthearted tone this year than last year."

One of the things that makes it more "lighthearted" are the three trips the cast takes during Season 7. Viewers will see the women in Mykonos, Greece, Punta Mita, Mexico, and Hong Kong. "Mykonos was amazing," Girardi gushes. "That was probably a trip of a lifetime and Kyle [Richards] joined me on that one. So that's a lot of fun. We had a great time. That's just pure, pure, pure joy."

She also has positive thing to say about Mexico. "The Mexico trip with the girls and the husbands? Adorable, a lot of fun. Lot of good food, lot of good tequila, laughs. We had a good time." But as thrilling as Hong Kong was, the women definitely faced some drama. "Hong Kong was great and then, you know, there's a little bit of tears, but I'm not going to give it away," she teases.

Another way that Season 7 will differ from 6 is that fans of Girardi will get to see another side of her. "You get to see where I come from, you know my personal life," the Housewife reveals. "You get to meet my mom and see that whole relationship. I think you get to know me, Erika, a little bit more intimately." The same can be said of her stage personality, Erika Jayne. "Then, there's obviously Erika Jayne, who's running off to Mykonos, performing, and having a great time."

Overall, the 45-year-old reality star says those who tune in will see her "having a lot of fun," especially when it comes to bonding with the other cast members. "I get to know the other women in my cast a little bit too, since it's my second year-round," she says. "I get to develop and strengthen my relationships a little bit. I had a great time, I have to tell you."

Ever since she joined as a full-time Housewife in Season 6, both Girardi and Jayne have become fan-favorites. So, it's good to know that viewers will get to know her even better, in addition to seeing her once again be an all-around badass with a contagious attitude and love for life.