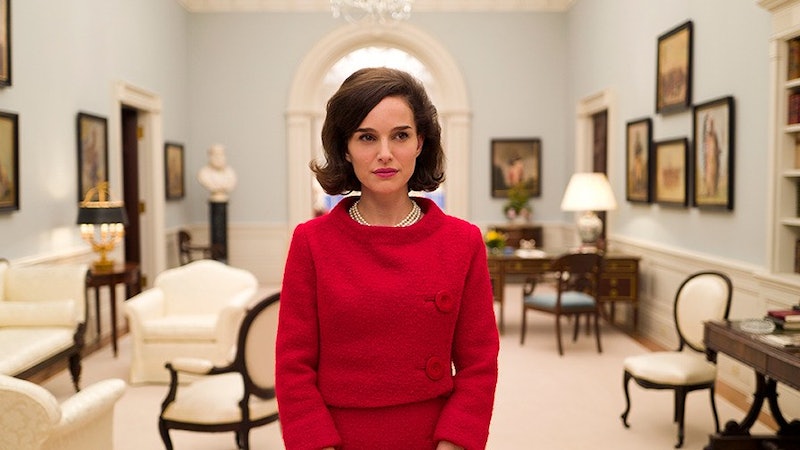 Biopics about famous women who are married to more famous men often end up ignoring their actual leads and focusing too much on the male spouses. Pablo Larrain's film Jackie , however, which follows First Lady Jacqueline Kennedy as she grieves the death of her husband JFK, never once strays from being a movie about her, allowing Jackie's desires, struggles, and demands to take full focus. Unlike so many female-led biopics, Jackie lets its protagonist's story not get overshadowed by the fame of her husband, and it reveals just how hard Jackie had to fight to have her voice heard in a man's world.

Starring Natalie Portman as the titular first lady, Jackie follows the immediate aftermath of the assassination of President John F. Kennedy. The film is a stunning portrait of a woman unhinged with grief, and it ventures into moments that can appear like a dream before pulling the viewer back into the harshness of the reality of the situation. Though Jackie herself wobbles from being alert to swimming through a haze, her lucid moments are where some of her most empowering and demanding scenes take place. Forced to deal with a personal tragedy in the public's watchful eye, any person might feel the pressure to simply escape, retreat, or let others take charge. Yet Jackie understands how important maintaining her husband's legacy is, and she understands that backing off, even when so-called "important" men tell her what they believe is best, is not an option. So instead, she moves forward, making the calls and demanding what she wants.

It's the film's framing device that gives Jackie the most power, though. In a sprawling New England house not long after her husband's death, Jackie sits for an interview with a writer from Life Magazine, played by Billy Crudup. Based on a real interview, the set up allows Jackie herself to not only steer the narrative of her story, but also that of the movie itself. Throughout the interview, she retracts comments, demands approval, crossing out certain notes, and makes remarks such as, "Don't think for a second I'm going to let you publish that." And while Crudup's journalist is, at first, respectful of the former first lady, his attitude occasionally shifts to that of a reporter frustrated that his subject wants so much control over the story. As a journalist myself, I'd be just as frustrated as Crudup's character, but as a woman watching a woman of the early 1960s fighting to tell her own story, I'm inspired.

Yet as Jackie shows, the first lady wasn't always so in control of her power. The movie flips back and forth between the "present" interview and flashbacks to Jackie's life with JFK (including the famous White House television tour) to the day of the assassination and following turmoil. While the Jackie with the journalist is immediately intimidating and in charge, the Jackie of the flashbacks needs time to realize that she can demand more power than she's being given.

Whether it's making her thoughts on funeral arrangements known, dealing with her sudden homelessness, or making demands of where to place JFK's body in Arlington National Cemetery, Jackie's opinions get heard. Yet, often, they're met with doubt, hesitancy, and mistrust from the men around her. It's expected as such; as a woman and wife in 1963, even one married to one of the most powerful men in the world, Jackie doesn't have a lot of power outside her First Lady duties. But faced with some disrespectful mansplaining and sexism in the wake of her husband's death, she is inspired to take action. A fire lights up inside her, and the results — in which she demands respect and ignores the "advice" of the men around her — are some of the most feminist, powerful moments in film this year.

Much of Jackie shows just how much time she spent fighting for her opinions to be considered, her choices to be validated, and her decisions to be respected, when she should have just been allowed space to mourn her husband. Upon her husband's death, Jackie didn't wilt like a dead flower; rather, she rose from the ashes like a pheonix. We may remember her as a first lady, but Larrain's film reminds us that, whether it's schooling other White House employees on presidential history, braving a long, vulnerable funeral procession on the streets, or coining JFK's Camelot legacy, Jackie Kennedy took charge and made her voice heard at a time when women had to fight for every word.