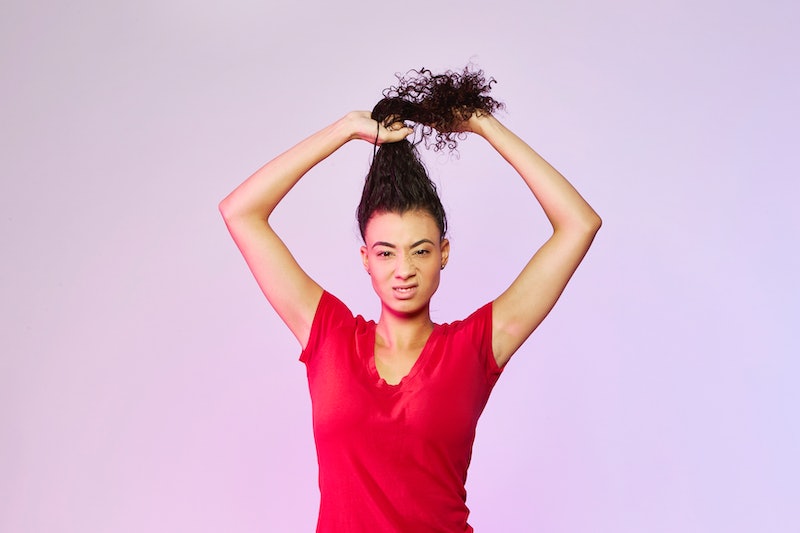 The whole point of making New Year's resolutions for yourself is to improve your life and make you happier. We're only human, so we get excited about the prospect for a fresh start, because it makes us believe there's something better waiting on the other side (and gives us the chance to rinse off all disappointment we experienced last year). So we write a long list of resolutions that will help us reach that promised land as quickly as possible.

We get so caught up in the idea of New Year's resolutions, though, that we end up making a few harebrained commitments that we probably can't keep. Remember that January a few years back when you swore you were going to get up at 5 a.m. every day and transform yourself into a morning person? Yeah, we're talking about those kinds of resolutions. As healthy as it can be to jot down some intentions for 2017 that will help you be more badass than the year before, just make sure you're not aiming for certain things just because people around you have already accomplished them. Ask yourself what's really important to you in the long run, and whether it really matters what

Here are seven New Year's resolutions that are total bullsh*t.

Maybe being single in 2016 wasn't that much fun, but don't use that as fuel to rush into a relationship as quickly as possible. Pressuring yourself to find love within a certain time frame might cloud your judgment and prevent you from wading through the dating pool with a clear mind, and besides, it will leave you feeling utterly disappointed if you don't meet the love of your life in 2017.

You can want love to come into your life, and wish for it, but nothing healthy comes out of pushing yourself into finding a partner. The classic cliche is true for the most part: love finds you when you least expect it — not when you force yourself into it.

Wanting to introduce some exercise into your life is wise. Working out more regularly will help you sleep better at night, improve your concentration and productivity, and decrease symptoms of depression and anxiety. But going overboard with your fitness resolution isn't going to get you anywhere. In fact, it'll only bring you a world of misery.

If you overcommit to going to the gym at the start of 2017, you may create an unhealthy relationship with exercise. You only go because you feel like you have to, and then you beat yourself up when you don't make it. If you do try to live out such a big promise, you'll also burn out pretty quickly, because when you think about it realistically, there's no way you're going to get your ass to that spin class every single weekday. You're busy. You have a life. More importantly, you don't need to spend that much time working out. If you want to fit in some extra exercise, go hiking with your friends, take a dance class, or have more sex.

If you've heard it once at your office, you've heard a million times. People love to create New Year's resolutions that are going to help them shed bad habits. Unfortunately, swearing off all carbs won't help you get rid of any of your undesirable bad habits. Refusing to eat bread will only build up a craving so monstrous that you'll likely end up bingeing on junk food and consequently feeling pretty lousy afterwards.

Don't restrict yourself of anything at the start of the year. If you feel like there are some changes you would like to make in your diet, map out a few doable resolutions that aren't going to leave you feeling deprived. For example, promise yourself you'll eat add in an extra serving of vegetables every day, or that you'll stick to just one coffee a day. You're much more likely to accomplish goals that are more moderate.

Getting attached to the number that appears on your scale is a waste of your precious time. It's one of the most popular New Year's resolutions, but telling yourself to lose weight isn't always a healthy way to take care of yourself. Most of the time, wanting to drop off the pounds is a product of our society telling us that thin people are the most beautiful, so we try to model ourselves after what we see in the media. Instead of focusing on losing weight, we're better off asking ourselves how we can be more body positive with the skin we're currently living in.

Ah, if only anxiety could be shooed away with a simple New Year's resolution. Every person struggling with anxiety wants their next year to be a little less panicky than the one before, but telling yourself to be less anxious isn't the key to making that happen. Not allowing yourself to experience the discomfort that comes with anxiety is a rookie mistake.

Assure yourself that there's nothing wrong with the anxious feelings that arise in everyday life, and think of the coping mechanisms that ease your stress most efficiently, such as yoga and meditation, or drawing in an art class. Then make some new resolutions that give you the time to do these activities more often.

In January, all the magazine covers promise to give you flat abs if you'll just follow a simple two-week program. The concept of a flat tummy is glorified in Hollywood, and we rarely see women in the media who actually have a belly (which is completely normal, by the way). You don't need to copy what you see, though, especially considering the fact that those photos have been photoshopped, so give up the pursuit of Keira Knightley's abs, because what you've got on your midriff is pretty stunning just the way it is.

Plus, as we've explained before, the whole concept of flat abs basically works against women's genetics in the first place. The game is rigged.

We all have that one pair of pants in the closet that we save for when we've finally lost the weight we've been dreaming about losing since high school. It's sad, but true. It's time to toss out those jeans completely, though (or at least give them away), because you've got so many more exciting things to focus on in 2017 that have nothing to do with squeezing into some denim. Trying to change your body to fit into a tiny piece of fabric is something society wants you to do, but there couldn't be anything that's more of a waste of your time.

Instead, brainstorm all the actually badass things you can accomplish in the next 12 months — spend more time meditating, promise to pamper yourself once a week, or go for that promotion at work. Trying to fit into your skinny jeans is just a distraction from the things that will actually make you happy in the longrun. Like a healthy relationship with yourself.

More like this
The 19 Best Tweets & Memes About Bisexual Awareness Week
By Lexi Inks
14 Last-Minute Halloween Costumes That Only Require A Flannel Shirt
By Kirsten Nunez
64 Genius Gift Ideas For Every Single Guy In Your Life
By Teresa Newsome, Mia Mercado and Brittany Leitner
12 Easy Halloween Costumes You Can Wear With A Denim Jacket
By Kirsten Nunez and Bustle Editors
Get Even More From Bustle — Sign Up For The Newsletter