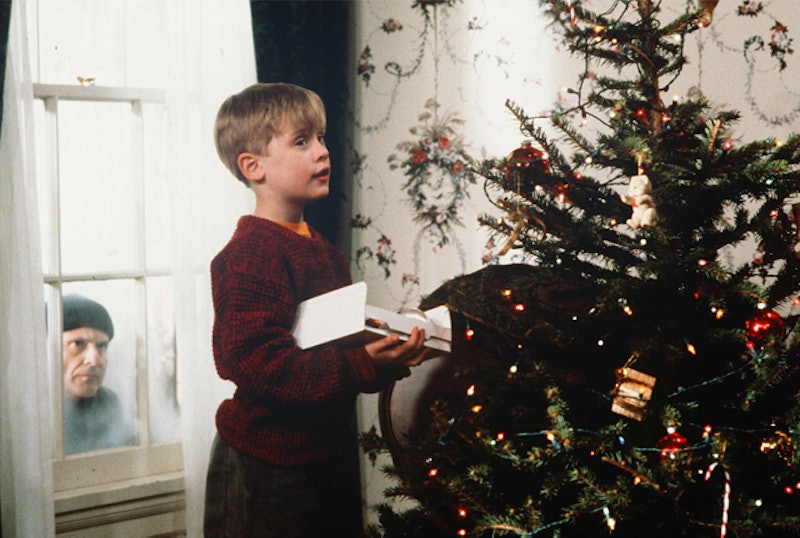 When you were a kid, Christmas Eve in the '90s was the best thing ever. There were rituals you have that can't be replicated for the kids of today. Well they could, but they probably wouldn't get them in between all their iPads and modern stuff. That made me sound old, didn't it? It will make me sound even older when I tell you I still do some of the things on this list. Especially the things pertaining to Mariah Carey. You're never too old, or too far removed from the '90s for a little Mariah Carey.

Of course there are the things that all children do on Christmas Eve, like leaving cookies and milk (or brandy, if your parents are feeling kind of fun) out for Santa. Those things are eternal. Although now I imagine if children have any doubts about Santa all it would take was a quick Google search to ruin Christmas forever. Is Google the Grinch that stole Christmas? So as you cuddle up with some egg nog and hang out Christmas stocking a the end of your bed this Christmas Eve, spare a thought for the '90s child in you. Here are 11 things '90s kids did on Christmas Eve.

There are a lot of problematic things about Home Alone now, like a child at home alone handling a gun. But it was 1990 and we were less woke back then, so we'll let it slide. All '90s kids wanted to do on Christmas Eve was ritually sit down to watch their annual screening of Macaulay Culkin raising hell for the bad guys.

2. Popped Popcorn From A Novelty Bag With Teenage Mutant Ninja Turtles On The Packet

These days you buy corn kernels and pop them like a pro in a pot over the stove top, but back then, Christmas popcorn came in a microwaveable bag, and it was mandatory for it to have Teenage Mutant Ninja Turtles (or any other '90s cartoon icon) adorning the packaging wearing Santa hats.

3. Danced Around To Mariah Carey

Remember Disney Christmas Sing-A-Longs? All your favorite Disney characters singing Christmas songs, with the words at the bottom of the screen, and a little bouncing Mickey logo bouncing along the words so you could keep up. A '90s Christmas Eve staple.

As already mentioned, Santa was a definite in the '90s. There was no way to Google on your personal i-screen to find out what the actual deal was. So on Christmas Eve in the '90s, your belief in Santa was 100 percent REAL.

6. Prayed For A Tamagotchi

Kids these days probably pray for things like Kylie Jenner lip kits and hover boards, but in the '90s, all you prayed for on Christmas Eve was a Tamagotchi in the morning.

7. Cuddled Up In Bed With Limited Edition Christmas Beanie Babies

Every year your collection of Christmas Beanie babies would grow, and every year you'd cuddle into bed to dream of sugar plums with them nestled all around you.

Every '90s kid needed Christmas themed cereal during the holiday season. Of course, it was just regular cereal with Christmas packaging, but it just didn't really feel like Christmas without it.

9. Wore A Crazy Christmas Jumper Or Full Outfit With A Side Pony Tail To Boot

The more "cast of Saved By The Bell" your sweater and hair style combo on Christmas Eve, the better.

10. Hoped That Maybe Some How Your Dad Would Have To Fill In For Santa That Year

Remember when Tim Allen had to be Santa to save Christmas? You'd spend your Christmas Eve in the '90s praying the real Santa would slip (you sadistic '90s child!) and that your own father would have to don the Santa suit and get to saving Christmas. With you as his trusty Christmas Elf side-kick, of course!

11. Wrapped All Your Gifts In Christmas Winnie The Pooh Paper With Matching Name Tags

Everyone was kind of obsessed with Winnie The Pooh in the '90s, and on Christmas Eve, it was mandatory that you wrapped all your gifts in Christmas themed Winnie The Pooh Christmas paper. What was more adorable than Eeyore, Tigger, and Piglet (who was your favorite Pooh friend? Definitely not Rabbit, I'm sure — sorry, Rabbit) wearing Santa hats in the '90s?

Nothing. The answer is nothing. Except for maybe you wearing a Santa hat in the '90s, and odds are you're going to be reliving that brand of nostalgia in a scrapbook the instant you get home. Happy '90s 'gramming!

More like this
American Girl Doll Memes Are Going Viral On Instagram & Tiktok
By Emma Carey
Eleven From ‘Stranger Things’ Is A Cancer Zodiac Sign, An Astrologer Says
By Brittany Beringer
The 5 Best Manifestation Apps
By Brittany Beringer
20 Genius Kitchen Storage Solutions For Decluttering Your Space
By Emma Garza
Get Even More From Bustle — Sign Up For The Newsletter