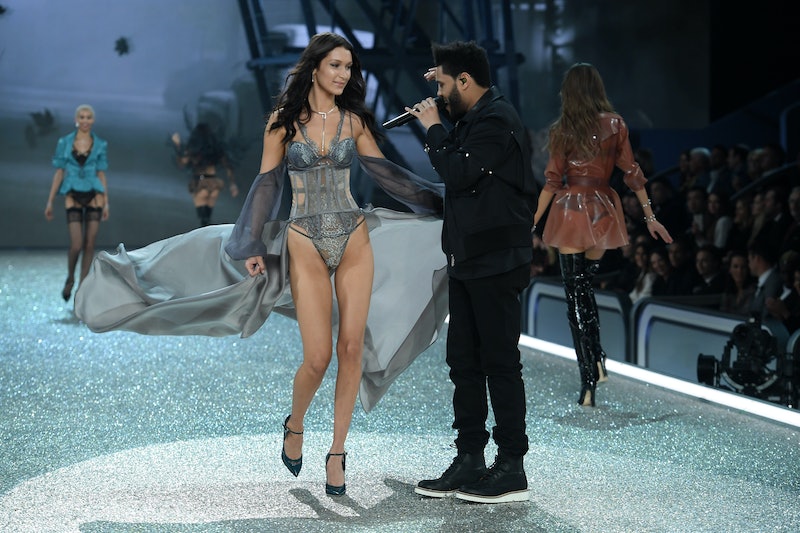 Despite the bevy of nearly-bare beauties at this year's Victoria's Secret Fashion Show, all eyes were on one not-so-chance encounter between two formerly star-crossed lovers on Monday. When Bella Hadid and The Weeknd sashayed past each other on the runway, the internet was set ablaze. The newly-minted angel strutted her stuff as the Canadian crooner, whose real name is Abel Tesfaye, performed a medley of his hits and stared lovingly at the ethereal model. Although the old couple reportedly ended their 18-month relationship last month due to hectic schedules, there's still undeniable chemistry between them. Is there a chance that the "Starboy" and the supermodel could rekindle their romance? Let's review the evidence.

While the dreadlock-less vocalist is focusing more on his music than love these days as he promotes his third album "Starboy," Hadid told E! News prior to her VSFS debut that she's got nothing but love for the "Party Monster" and was psyched to walk alongside him during his performance.

"There is no awkwardness. He is my best friend," Hadid said.

To further prove their seamless split, the brunette beauty even posted a photo of herself strapped in a sheer silver ensemble with The Weeknd walking closely behind just days before the "sexiest night on television" was broadcast. She wrote, "Thank you @theweeknd for being the best and most incredible performer on the planet. You KILLED it, as always." (Insert all of the heart eye emojis!)

Back in November, a source told People magazine the couple called it quits because, "Their schedules have been too hard to coordinate." Obviously, the universe thought otherwise or they wouldn't have wound up on stage together. Besides, a supportive best friend is always a good sign for rekindling a romance.

As The Weeknd sings, "The Hills have eyes," and so does the internet. Although the two probably had the most amicable breakup in recent memory, onlookers couldn't resist poking fun at the singer and model's runway rendezvous on Twitter:

Even W magazine couldn't help fantasizing about a relationship redo:

How many chances does a girl get to spread her wings (literally) past her ex-boyfriend, amirite? But, considering that the two ended on good terms and supposedly just because of their schedules, I'm simply left to speculate that they may be inclined to give it another go.

Yes, having a busy schedule is a valid excuse for breaking up. But Hadid and The Weeknd are sure to cross paths again. Take the Grammys, for instance, where the couple made a stunning debut together just last year. The Weeknd's new album did not make the cut for this year's awards. But "music's biggest night" would be the perfect opportunity for him to make an appearance to promote his work. The same can be said for Zayn Malik, whom Hadid's sister, Gigi, is dating. With the award show just around the corner, the Hadid sisters could show up arm-in-arm and slay the red carpet themselves.

Alas, I refuse to believe the VSFS was Hadid and The Weeknd's final bow. The hopeless romantic in me is optimistic that their is much more "Beauty Behind the Madness" for the picture perfect pair.