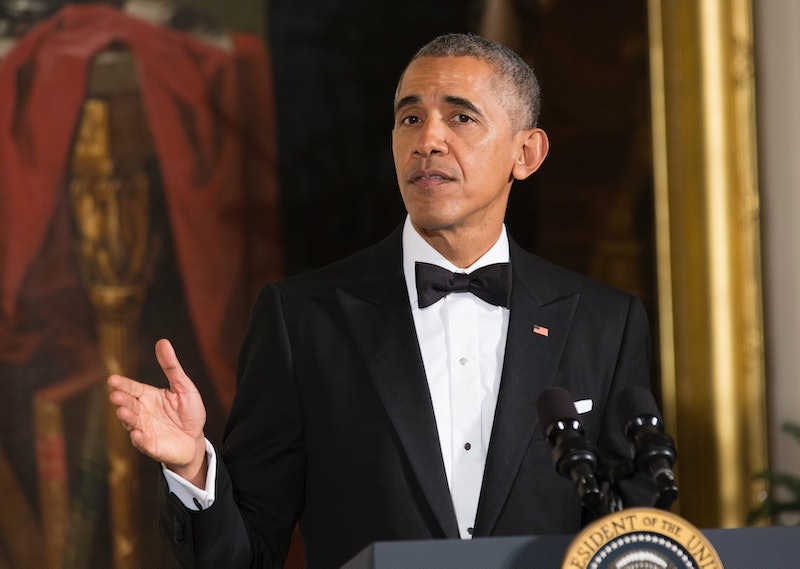 President Barack Obama's days in office are coming to an end. In less than two months, the 44th President of the United States of America will leave office after two terms and begin the next phase of his life. But before he does so, a new movie that dramatizes an earlier stage in his life, Barry, will premiere on Netflix on Dec. 16. So with all he has going on, has the president had a chance to see the movie yet, and if so, what does Obama think of Barry ?

It looks as though the president has been a little too busy to view the film, and he hasn't released any comment about it, either (Bustle reached out to the White House for comment, but hasn't heard back at this time). Catching up on his Netflix doesn't appear to be high on his agenda at the moment, and for good reason. The president is currently trying to protect his legacy from the country's next president, Donald Trump, who is essentially threatening to undo the bulk of Obama's accomplishments in healthcare, fighting climate change, regulating Wall Street, and more. In fact, in the four weeks since the election, the president hasn't even tweeted to his personal Twitter account, and his @POTUS account shows only seven tweets.

Before the election, though, Obama did sort of manage to share his opinion on the year's other movie about his youth — Southside With You — which dramatizes his first date with Michelle Obama. While it isn't clear if the president viewed the copy of the film that was reportedly sent to him, word did get out that he and the First Lady reportedly knew about the film and had an opinion on it. "We've heard from some pretty reliable sources that they are aware [of the film]," the movie's director Richard Tanne claimed, according to Vanity Fair. "They are excited. And they are also a little baffled by its existence."

Since Barry depicts an even younger version of the president than is seen in Southside With You — the new movie shows him in his early twenties as a student at Columbia University — it's possible that Obama is just as baffled by its existence as he was by the previous film. It has to be odd to see someone playing you in a movie reenacting moments of your life from your youth; especially when it happens twice in the span of a few months.

While it isn't clear what Barack Obama thinks of Barry, critics are pretty much in agreement that the movie is very good. You can decide what you think of it for yourself when it hits Netflix on Dec. 16.