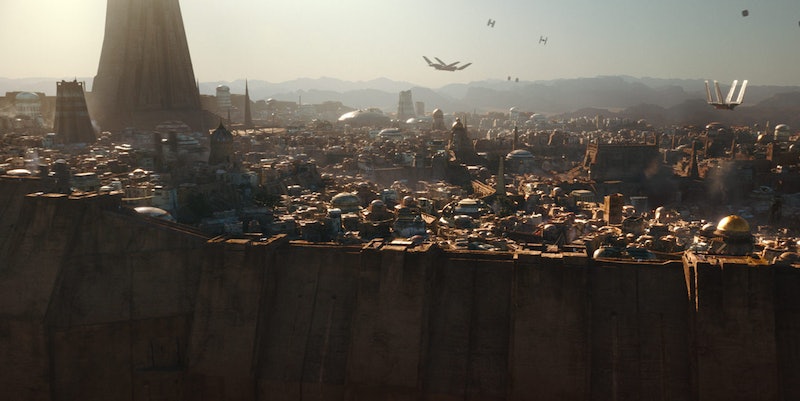 With a new Star Wars movie heading to theaters on December 16, it's a good bet that just about everyone will make the trip to the cinema to watch it. So the question isn't really whether or not you should see Rogue One in the theater, it's whether or not you should pay the extra cash to watch the movie in the 3D format. So should you see Rogue One in 3D, or is the 2D version of the film just as good?

For the answer, you can probably look to the previous Star Wars movie; last year's The Force Awakens. That film was the first in the franchise to feature 3D technology in its debut, a fact that alone could have inspired many to see what all the fuss was about. However, The Force Awakens didn't do anything revolutionary with the format. It wasn't filmed in native 3D — considered the superior technique by most experts — and was instead converted to 3D from 2D. Rogue One underwent the exact same process, and even had its 3D conversion produced by the same company that worked on The Force Awakens. So basically, if you enjoyed the 3D on The Force Awakens and thought it was worth the upgrade, then chances are you'll have the same opinion on Rogue One's 3D. And if you thought the 3D on The Force Awakens was nothing to write home about, then you may feel the same about Rogue One's extra dimension.

However, one possible aspect of Rogue One that may give it the nod over The Force Awakens when it comes to 3D is the film's action. This is partly speculation on my part since no one has seen nor reviewed the new film yet, but based on its story and trailers, it seems as if Rogue One is going to feature a lot more action than its predecessor. The movie is a different type of Star Wars movie, with a heavier instance of the "wars" aspect than the rest of the franchise, and it seems as if it's going to be quite the thrill ride. Just take a look at the newest international trailer, which focuses on the action over the story, to get an idea of the type of spectacle the movie may provide in 3D.

Also, as an added bonus, the movie does represent the first time Darth Vader will ever be seen in 3D. Whether this leads to some cool effects involving the force is anyone's guess, but his presence in the movie may be enough to justify chipping in a couple extra bucks to upgrade your ticket.

Ultimately, how you decide to watch Rogue One is up to you. 3D certainly won't be necessary to enjoy the movie or to view it how it was envisioned, but if you want the most explosive experience at the theater, then the third dimension is probably the way to go.