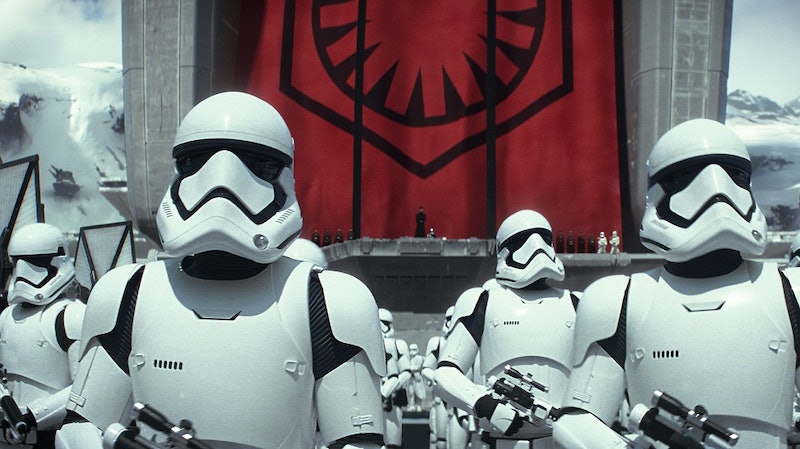 The first Star Wars movie in over 10 years (or 32 years, if you don't count the prequels) is landing in theaters this week, and people are understandably losing their minds. The film is predicted to be the most successful of all time, and it's also the first Star Wars movie to have its first run in 3D (The Phantom Menace got a 3D re-release in 2012). So why isn't anybody talking about this? I understand that the bulk of the excitement surrounding the film has to do with the return of characters not seen on the big screen since the early '80s, like Princess Leia, Han Solo, and Luke Skywalker, as well as its seeming commitment to capturing the spirit of the original trilogy through the use of practical effects and a (hopefully) non-convoluted story (two things the prequels failed at). But since the Star Wars films have always been on the cutting edge of special effects technology, is it possible The Force Awakens will do things with 3D that fans have never seen before?

Pretty much every big blockbuster these days gets a 3D release. But most of the time, the film is converted to 3D as an afterthought after being shot with 2D cameras, and the effect comes off more like a gimmick than anything meaningful — and that's if it's even noticeable at all. I think the last film to actually make 3D something to get audiences excited about was Avatar back in 2009 (this year's The Walk made excellent use of the technique, but audiences ignored it), so the practice could definitely use a jolt.

Unfortunately, anybody hoping for revolutionary 3D effects a step above Avatar isn't going to get it from Star Wars. The Force Awakens was shot on 2D cameras and converted to 3D after the fact, meaning that the effect won't be particularly immersive. However, the movie does reportedly contain a few scenes in which the 3D effect is so good that it made a believer out of director J.J. Abrams, who had previously not been a fan beforehand. As reported by The Hollywood Reporter, Abrams said at a recent press junket,

"As someone who really hasn’t been the most vocal advocate of 3D, the strangest thing happened to me on this. When I was watching the reels in 3D, there were a number of shots — and I know this sounds insane — that I hadn’t understood in the three-dimensional space quite the way I did when I saw them in 3D. I actually felt that there were things that were playing better in 3D. I had never felt that before."

So if Abrams' conversion is any indication, it does sound like seeing The Force Awakens in 3D may be worth the extra few dollars in ticket cost, if only for a few standout scenes. So what about that other format, IMAX? Well, the movie is being released in three different IMAX versions, depending on what your local theater offers. There's an IMAX 3D version, an IMAX 70mm film version, and an IMAX laser projection version. IMAX cameras were only used in one scene of the movie (believed to be the opening), so it's not essential to see the movie in that format. But if you want the absolute premier Star Wars experience, then IMAX is probably the way to go.

In a way, it's good for fans that Star Wars isn't pushing too hard on either 3D or IMAX. Not everyone has access to a theater capable of showing 3D movies, and IMAX screens are even harder to come by. So while each format is said to offer extra perks to those who are able to see them, those who can only watch the movie in 2D shouldn't feel like they're really missing out on anything monumental. And when a movie is as anticipated as this one, pleasing the highest number of fans should be the top priority.