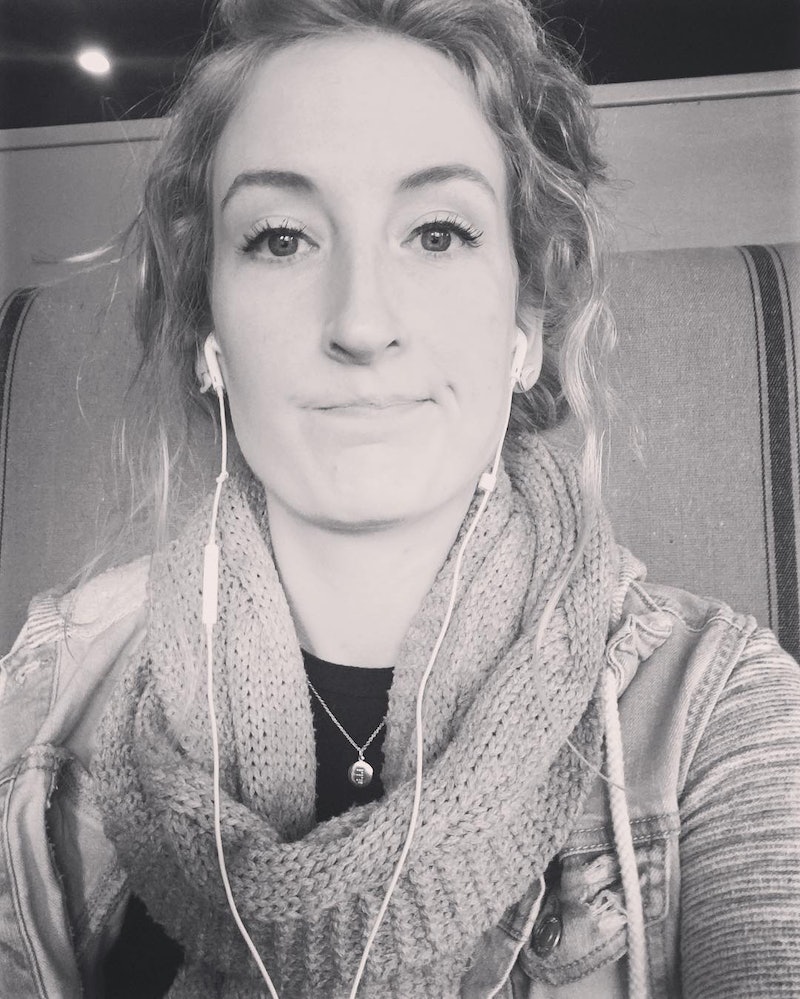 If you’re currently in love or whatever, I’m genuinely happy for you. No, really, I’m happy you’re happy. You probably deserve someone awesome, and happily-coupled people like yourself give jaded singles (like myself) hope that love isn’t actually a lie. Personally, though, I’m over dating right now for a number of solid reasons.

Not only am I in a super weird place in my life, (more on that later), but my last boyfriend couldn’t make up his mind about me, the boyfriend before that was mean to me, and I’m the most restless person I know. Plus, I’m just exhausted by the whole dating game — a fact that really shouldn’t be all that surprising, because multiple studies have shown that single women are happier and healthier than women who aren't single.

Look, I’m not saying I won’t have sex with friends and strangers alike in the coming months — I mean, sex is important and I love having it. That said, I think it’s time for me to take a break from dating. I haven’t been single and not dating anyone since I was 21, and I’m not convinced that I even know how to date in the first place. If you can relate to my reasons for giving up dating, then perhaps you should consider being single for a little while too.

I write pretty frequently about the importance of keeping your self-esteem boosted and finding ways to live authentically — but personally, I haven't felt like a successful human lately, for a number of reasons.

After bouncing around from Brooklyn to Missouri to Southeast Asia and then back to Missouri for all of 2016, I'm kind of broke right now. I also don't have health insurance, and I've been driving other people's cars for months. My laptop crashes almost daily (time for a Macbook Air, I think), and I consistently make poor choices with men. (When I was 20, I almost dropped out of college to move to Italy with a guy I'd only been dating for a few months. That's not even the dumbest thing I've done for love, either.) Plus, thanks to a surprise bed bug infestation and one violently angry neighbor (f*ck apartment living), I'm currently living with my parents. So, yeah, I'm essentially Rory Gilmore right now (minus the trust fund and the Yale journalism degree), and it doesn't feel great.

Of course, I'm not saying I should feel like a complete failure right now. I mean, things aren't that bad. Lots of young people are living with their parents, so it's really not that big of a deal that I'm crashing with mine for the time being. (I'm paying some rent, too, so there.) My debt is minuscule, I have two college degrees, two awesome jobs, plenty of career goals, lots of ambition, near-perfect physical health, and ample love in my life. I travel every time the opportunity presents itself, and I think I'm a pretty independent woman.

But none of this changes the fact that my self-esteem is low right now. If I tried to date in my current state of mind, I'd probably end up dating someone who undervalued me. I have a tendency to date people who take me for granted even when I'm feeling unstoppable, so until I feel consistently good about myself again, I'm taking myself out of the game altogether.

I spent the better part (almost four years) of my early 20s in a relationship that started out lovely. Seriously, it was heaven at first. He was gorgeous and he spent a ton of time with me. He said "I love you" every day and introduced me to the music of Frank Ocean. He was super nice to my cat and my nieces. Sadly, though, that relationship became emotionally and sexually abusive within a year. On top of that, we wanted to do very different things with our lives.

Fortunately, I've been free of that situation for almost a year and a half now. (#dumphim.) Unfortunately, I'm not 100 percent mentally free of that relationship yet. After being triggered during sex by two different partners this past year, I'm realizing that I haven't dealt with everything that went on between me and my ex. Whether the next person I date turns out to be the love of my life or not, I don't want to date them until I've addressed at least some of this residual fear and shame I've been unknowingly toting around.

I Want To Spend More Time On Creative Pursuits

Hey, it's a cliche for a reason. I love what I do for work, daily exercise is one of the only things that keeps me from losing my sh*t, and I genuinely need to socialize on regular basis — but after I finish up with all of that, there's just not a lot of time leftover for me to spend on my other interests. I feel like everything from my mental health to my self-esteem to my creativity would benefit from some quality time with my long-neglected hobbies, though.

Honestly, I couldn't be more happy that writing is my job (it's literally my dream), but I want to start writing for myself once in a while, too. I haven't written poetry or played classical guitar in years, and it's starting to take a toll on me. If I don't take a break from dating, I'll have even less time to devote to my creative pursuits, and that's just not OK with me right now.

I'm In A Transitional Phase Of My Life

As you've probably gathered by this point, my sh*t isn't as together as I'd like it to be. I'm in the process of deciding where I should live next (Kansas City is currently in the lead), and I need to buy a bunch of expensive crap (like a car) that will ultimately improve my life. The last thing I need to do right now is tie myself to a person that I'm actively planning to move away from. Unless someone super awesome comes along, it just doesn't make sense to cultivate a romantic relationship until I'm settling into my new home — even if it takes me a year to get there.

I Want To Work Really Hard Without Feeling Bad About It

I care more about my career than I care about most things, and I'm also broke as hell. These two facts combined give me the perfect excuse to become a total workaholic (for now) — and not dating anyone will allow me to embrace said workaholism without feeling like a neglectful partner. Win-win.

I Want To Get Better At Being Single

Thanks largely to the half of me that is introverted, I'm really good at doing things solo. Even when I'm in a relationship, I typically spend plenty of time hiking, traveling, and chilling by myself. Knowing how to spend time alone is not the same thing as being happily single, though. To be happily single, you've got to be able to provide your own validation, and that's been difficult for me lately. Instead of spending energy on dating, I want to learn how to make myself feel so happy and capable that I never get stuck in an abusive (or even just an unhappy) relationship again.