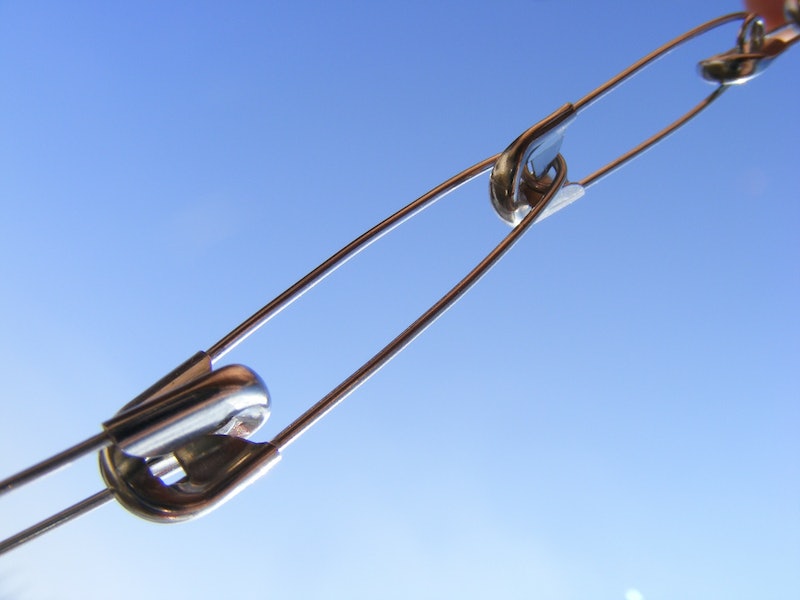 As many women of color will usually agree, it's not our job to educate others how best to support us in the feminist movement; it's on others to educate themselves. (Our burden is heavy enough, what with misogynoir and trying to make our voices heard where they're often deliberately excluded). But the Safety Pin Box, a monthly subscription box created by activists Leslie Mac and Marissa Jeane Johnson, hopes not only to help educate passive feminist allies, but also to encourage them to speak up and stand up for underrepresented groups.

Mac and Johnson dreamt up the idea after the somewhat problematic trend of wearing a safety pin to denote oneself as an ally begin picking up steam after the conclusion of the 2016 election: "When we heard about the safety pin trend ... we, like many other black people chuckled at the notion of the safety pin as actual solidarity work," Johnson tells Bustle. "Jokingly, we talked about how folks instead should just pay reparations and listen to Black women."

But as Johnson notes, "What started as a joke has since turned into a real viable model for filling a few major needs in our country: Redistributing funds directly to Black women, and teaching white people how to enter into justice work on a way that is accessible, sustainable, and safe." The Safety Pin Box aims to "not only financially support Black femme freedom fighters, but also complete measurable tasks in the fight against white supremacy," explains the project's website. And I for one think it's a bold, innovative, and beautifully simple idea.

The box comes in four subscription types. The “E-Ally Box” costs $25 a month and is “an electronic form of solidarity" with “exclusive ‘calls to action’ when urgent ally services are needed in times of crisis.” There's also the “Pin Pals Box,” which is shared between two people for $50 a month and contains tasks for both participants to complete together. Then there's also something called the "Premiere Box Subscription," which costs $100 a month and includes a feature on a public "Pin List" of shining members who are contributing to the movement, as well as various social and collaborative tasks. The site mentions that all tasks will "vary in scope from individual to group assignments, and task categories include data collection, personal development, influencing your networks, and showing radical compassion."

Oh, and you've also got the $50 "Revenge Box." This fourth box is one meant to be sent to the "white supremacist or Trump supporter of your choice"; it will also include a note mentioning that a donation to a cause of the sender's choice has been made in their name. (How darn excellent.)

The subscription box is set to elevate the humble safety pin to new significance. 2016 saw more of us than ever before wearing safety pins on our clothing to express solidarity with marginalized people; first inspired by post-Brexit UK, where wearers of the pins were supposed to quietly demonstrate to other Remain voters that they stood in social justice solidarity for a united and diverse Europe, the idea later spread to the United States following Donald Trump becoming the president-elect.

However, as many have noted, simply wearing a safety pin isn't enough. As Jaya Saxena points out at the Daily Dot, "The idea was, by wearing a safety pin on your clothing, you identified yourself as an ally, someone who was willing to use their position of privilege to fight for marginalized people. ... [But] it requires the marginalized person to seek out the safety-pin wearer, and at its worst, acts as a balm for allies, convincing them they’re helping while putting in no active work." Additionally, writes Bustle's Wendy Lu, "While the gesture comes from a place of good intentions, simply wearing an accessory isn't enough to actually produce any real change during this period of uncertainty and political strife. You have to do more than display a safety pin on your clothing to be an ally; your actions have to reflect the meaning of the safety pin, too, in real, concrete ways."

"Post-election, two things were true: The crisis for black people in America was getting worse, and there was a segment of white folks who couldn't stand on the sidelines anymore but didn't know where to begin," Johnson tells Bustle. That's where the Safety Pin Box comes in: As Johnson puts it, it "address both" issues — it works towards supporting black people when it's most needed, and points white people who want to help, but don't know where to begin, in the right direction to begin making positive change.

Addressing the criticism leveled at her by those who said she was charging "guilty whites," Johnson adds, "It's interesting to see the response for two women setting up a pay structure for educational work and consulting. People host workshops and do speaking engagements all the time. ... Leslie and I are selling services and expertise. ...We provide a service for a fee, like many other people in the world. No one is entitled to our knowledge and efforts, and SPB subscribers come to us willingly."

Since launching on Giving Tuesday, the Safety Pin Box has garnered over 300 subscribers. And seeing as it's a way to mobilize well-meaning, passive allies into actually acting on their support for marginalized groups, here's hoping it will have plenty more.