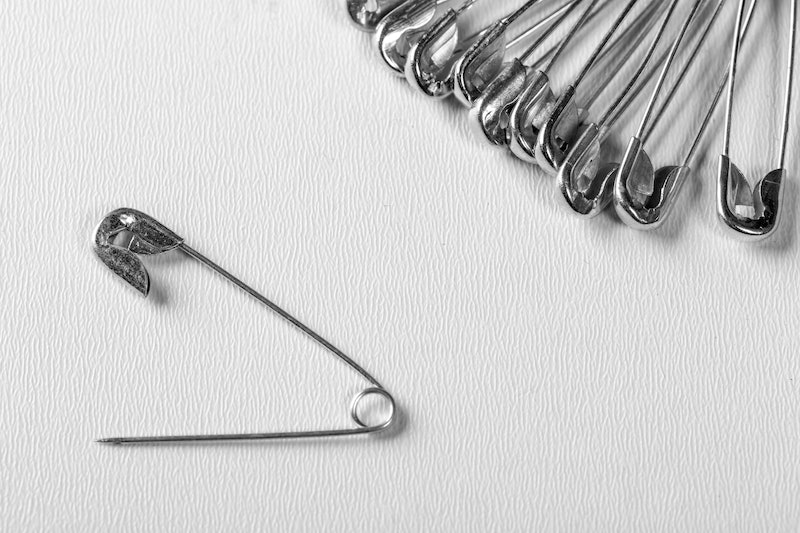 Soon after the presidential election ended last week, people around the nation began to wear safety pins on their clothing to show that they're allies around whom others — specifically those in marginalized communities — can feel safe. But while the gesture comes from a place of good intentions, simply wearing an accessory isn't enough to actually produce any real change during this period of uncertainty and political strife. You have to do more than display a safety pin on your clothing to be an ally; your actions have to reflect the meaning of the safety pin, too, in real, concrete ways.

With Donald Trump as our next commander-in-chief, it is indeed frightening to think about what might happen to our country in the near future. Just a quick glance on Trump's transition website will make a lot of people horrified. A few the policies that Trump has already endorsed or would reportedly spearhead include deporting undocumented immigrants, limiting access to abortion, building a wall to keep people in Mexico from coming into the United States, and defunding Planned Parenthood.

In order to collectively push back against Trump's win, people have been donning the aforementioned safety pins to stand in solidarity with women, people of color, and undocumented immigrants, as well as many other communities that Trump has offended in previous months, including people with disabilities. This isn't the first time the safety pin has emerged as a symbol of solidarity; after the Brexit vote to leave the European Union, many decided to start wearing safety pins as a response to the xenophobic attacks and violent hate crimes that followed. It is from the post-Brexit use of the safety pin that the idea to repeat the symbol in the United States arose.

Personally, I haven't hopped on this solidarity trend because I believe my support for marginalized communities (including my own) means more than just a couple of bucks' worth of safety pins. (As it turns out, I'm not the only one who thinks the safety pin trend has limitations.) I'd much rather spend my time talking to my white male friends about why Trump's outrageous win over Clinton is the perfect example of white male privilege. As a disabled woman of color, I'd rather hear that people are donating to the Muscular Dystrophy Association or marching alongside my fellow allies in a Black Lives Matter rally, which I myself have also done countless times in the past.

While it's nice to know if someone you're with is LGBTQ-friendly, supportive of women's rights and respectful of all identities, the truth is that it's not nearly enough. Just wearing a safety pin isn't going to actually do much for people who are at risk for deportation, hateful discrimination, or lack of accessibility to resources such as reproductive healthcare. Luckily, though, there are many ways to be an ally for marginalized populations besides pinning something on your shirt. Here are just a few things you can do right now, this week, to make a real difference:

There's no guarantee that adding your signature to a petition will actually work, but if one tiny gesture is actually going to make a difference, then why not? A couple of days ago, I got 39 people to sign a Change.org petition, urging the Electoral College to vote for Hillary Clinton on Dec. 19. Now, this particular petition has become the most popular ever on Change.org with more than four million signatures. That's a lot of people.

Regardless of whether or not the Electoral College actually listens to us, the petition sends a powerful message about how we feel about Hillary Clinton and, equally importantly, President-elect Trump. It's not going to go unnoticed.

Write Letters To Members Of The Electoral College

If you're not keen on putting your name under a petition, consider writing directly to the electors who officially choose our next president of the United States. Their contact information isn't difficult to find, and a thousand original letters from people telling their personal stories about why they want Clinton as the president may be even more powerful than a list of names. There is strength in numbers, so if you're hoping that faithless electors may turn the tide of history, here's a way to help make that happen.

Volunteer At An Organization That Will Soon Be At Risk

A great way to be there for people who may experience some significant struggles during Trump's presidency is to volunteer at an organization that supports those very people. For instance, people who are transgender and over 18 can get trained to become an operator at Trans Lifeline. You can also volunteer to help with legal advice, fundraising, and other initiatives. Other organizations that are at risk for defunding or hate crimes include Planned Parenthood, Border Angels, Rape, Abuse & Incest National Network (RAINN), and the Center for Reproductive Rights.

Donate To The Aforementioned Organizations

If work eats up all of your time and you simply don't have the wherewithal to volunteer, send donations to an organization in need instead. Personally, I'm pledging to donate $100 to Planned Parenthood before the end of this year. It's not much (I'm on a journalist's budget), but every dollar counts and I plan to donate more in the coming months.

You have a voice. Use it in way that's best for you. For some people, that means co-organizing rallies or peaceful demonstrations in their respective cities. Just make sure you're in a good state mental health-wise and aware of the risks that can come with protesting on the streets.

Whether you're a person of color, a lesbian, a trans woman, a person with a disability, or an undocumented immigrant, you have a story to tell that others will benefit from hearing. Use whatever creative medium you want — writing, painting, dance choreography — to get your message across and show others why this election matters to you.

Be There For Your Neighbor, Literally

There's a Google doc going around for New Yorkers who are open to accompanying local neighbors on their commute "in light of recent harassment and threats toward people of color, LGBTQ folks, and Muslims." Don't live in NYC? Create a Google doc for your own town and have allies sign up if they're willing to walk with others who may feel unsafe or anxious about being outside alone.

Communicate With Everyone — Even Those With Whom You Disagree

I believe in talking to people you disagree with, because hearing each other out will help to bring the country together in the end. In fact, some believe that ignoring those who have felt left out during and before the election is what led Trump to the presidency in the first place. The next time you see someone on social media ranting about a stance that you disagree with, consider sending them a friendly private message acknowledging their opinions and providing a link or two to a helpful article that talks about alternative positions. It's better than doing nothing, after all.

Wearing a safety pin is a good starting point. But all too easily, a safety pin can be used as a "safe," risk-free way to raise your hand as if to say, "I'm with you, too! I swear!" without taking any meaningful action. Some may even call it lazy. Instead, let's collectively work together to actually embody the spirit of that the safety pin through our discussions and behaviors. Taking action does more than a simple safety pin ever could.

More like this
Charlene White & MPs Lead Tributes For Bristol Bus Boycott Organiser Roy Hackett
By Sam Ramsden
Christina Aguilera Took A Powerful Stand At Brighton Pride
By Sam Ramsden
Your Daily Horoscope For August 12, 2022
By Mecca Woods
25 Things I've Reduced My Life To, In Addition To WFH In My PJs
By Ginny Hogan
Get Even More From Bustle — Sign Up For The Newsletter