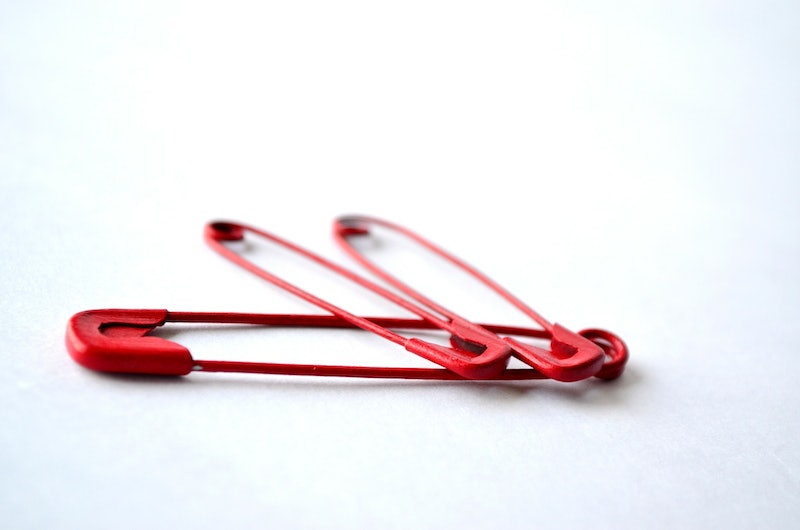 If you just returned from taking a (totally reasonable) break from the swirling political maelstrom that is social media after the presidential election, you must have questions. What does a safety pin on someone's shirt mean? Do the Barack Obama and Joe Biden memes ever stop being hilarious? Is your second cousin actually going to move to Canada, or are they just going to publicly threaten to do so every time something doesn't go their way over the next four years?

Two of these are easy enough to answer. Obama and Biden memes are clearly destined to be the most wholesome source of election-related levity until the end of time. In all likelihood, your second cousin is going to stay put in the United States despite statements to the contrary. The topic of safety pins, on the other hand, takes a little more explaining.

Trump's campaign was rooted in ideals that are strongly conservative, to put it mildly, and many voters aren't just disappointed with the election's results — they're afraid of how a Trump administration will affect their basic human rights. And these fears are not unfounded: Trump's plan to build a wall between Mexico and the United States' southern border, his proposed rounding up and deportation of all undocumented immigrants, and a ban he has said he would like to put in place against all Muslims (yes, literally an entire religion) threaten many people of color; Trump's running mate, Mike Pence, is known for leading the campaign to defund Planned Parenthood as well as holding strongly anti-LGBTQ views, as a result of women many women and LGBTQ people feel targeted; and following the election, Trump has named Steve Bannon, the extremely conservative former chief executive of Breitbart News, as his chief strategist and senior counselor. Furthermore, Republicans maintain control of Congress, and Trump has said he will fill the current Supreme Court vacancy with a pro-life judge. The president-elect may not be able to deliver on all of his campaign promises, but his election certainly signals a future of conservative legislation in America — much of which will come at the expense of the rights of a huge number of people.

So what does all that have to do with taking a safety pin selfie? Here's what you need to know.

Basically, the safety pin is a show of solidarity. After Trump's election to office, some citizens began wearing safety pins on their clothing to tacitly indicate their support for marginalized groups who may now feel threatened: People of color, the LGBTQ community, women, people with disabilities, and so on. (The pun is hard to miss, but just in case: They're wearing safety pins to show that they're a safe space. Ha.) The idea is that the safety pin identifies the wearer as an ally to people who are affected by racism, Islamophobia, sexism, ableism, or other forms of discrimination after the election.

Where Did It Come From?

The safety pin campaign developed in response to a rise in violence and hateful rhetoric across the country since the election; an uptick in hate crimes has been reported by several news outlets. According to TIME, the number of reported hate crimes, most of which were motivated by "anti-immigrant" sentiment, doubled between Nov. 11 and Nov. 14. The organization that kept track of these incidents reports that many directly referenced Trump's campaign, which has promised to restrict legal immigration and proposed a "Muslim registry."

The idea itself was inspired by a similar campaign in the UK this year after the country voted to leave the European Union. Much like the current American political climate, Britain saw a rise in anti-immigration hate crimes after the Brexit vote, and people began wearing pins on their clothing to demonstrate solidarity. The difference between the UK and American campaigns is that in America, a wider variety of groups is affected by the change — the safety pins are meant to stand with anyone who feels threatened by Trump's election, from Muslims to women to people of color to the LGBTQ community.

Why There's Backlash Against It

No social media campaign is complete without a backlash, and safety pins are no different. Supporters say that the campaign helps marginalized groups feel safe. Anoosh Jorjorian explained on Medium, "I’ve heard from plenty of POCs and Muslims as well as some LGBTQIAs that they feel surrounded by enemies. The safety pin helps them feel that they are not isolated and alone." Writing for Slate, Michelle Goldberg pointed out that it can bring people together. "We need an outward sign of sympathy, a way for the majority of us who voted against fascism to recognize one another," she writes.

However, its detractors criticize the campaign for accomplishing little real change. The wearer can give themselves a pat on the back for showing off their tolerance, but safety pins don't change the fact that millions are at risk for deportation or face discrimination based on their religion or sexuality. "If you really want to be an ally, and make a difference for the people harmed by Trump, there are plenty of ways to do that. ... Unfortunately, few of them will provide the kind of visibility or reassurance that you think your safety pin will," writes Christopher Keelty in an article published on the Huffington Post. (Worth noting is that Keelty is a white man, and as such, his piece has also received backlash; one example includes a response, also published on HuffPo, by Robin Rinaldi titled, "Safety Pins Aren't Embarrassing, But Mansplaining Is.")

As usual, both sides have a point. Wearing a safety pin can't hurt, but if it's the only way someone demonstrates their support, it accomplishes little except making the wearer feel more virtuous. As Bustle's Wendy Lu pointed out recently, "While the gesture comes from a place of good intentions ... you have to do more than display a safety pin on your clothing to be an ally; your actions have to reflect the meaning of the safety pin, too, in real, concrete ways." So if you want to pin a political statement to your shirt, go for it — just remember that there are many ways to make a difference, and they can all use your support right now.