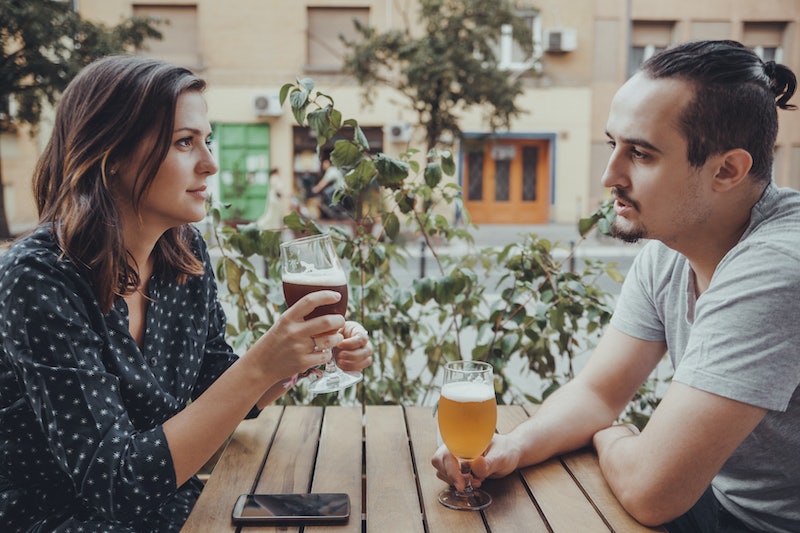 Ah, first dates. They can be full of excitement, butterflies, and hope. The good ones. But those don't seem to encompass the majority of cases. The reality is, bad first dates are just as common. But there are the bad ones, and then there are the really bad ones.

Exhibit A: My first ever OkCupid date realized he left his wallet at home after he arrived at the mall where we were meeting. And lost his parking ticket. I found him in the midst of an argument with the security guards, and then we ditched the mall to swing by his place for his wallet and go to Applebee's, where he proceeded to recite the calorie count of everything on the menu and brag about the "100 pushups" he'd done that day. On the way home, he pulled over to pee behind a dumpster. When he suggested we do it again, I said I wasn't sure we had much in common. In response, he pulled one of these: "But I'm one of the rare nice guys. The rest of them just want to get in your pants, you know."

I wasn't sure if anyone could top that story, but multiple people have now proved me wrong. Here are some of the most cringe-worthy first date stories you've ever heard.

"We went on a kayaking date, and while we were kayaking, we came across a couple that asked us for help with their boat and were having trouble going to shore. Instead of helping, my date yelled at them and told them they shouldn't kayak if they didn't know how to. After that, we had dinner, where he ordered multiple drinks and plates while I got a small salad, and he wanted to split the bill evenly."

"An ex of his tried to hit me with her car. [She] swerved into the opposite side of the road (oncoming traffic) and just about onto the sidewalk where I was standing."

"He asked me to meet him at a sushi place in a random shopping center on the other side of town. He was at least 10 minutes late. He spent a lot of the date talking about how his life was kind of falling apart and his recent DWI. He seemed compelled to share all of the details. After this thrilling (boring/depressing) conversation all about him and his problems, he didn't even attempt to pay for my sushi. He asked for separate checks. He then seemed mystified as to why I didn't want to continue the date by going for drinks elsewhere. I politely declined and awkwardly turned a cheek when he tried to kiss me at my car. He continued to text me for weeks, even after I made it clear I wasn't interested."

"My date yelled at a homeless woman begging us for money that she should 'f*ck off and get a job' and she turned out to be a girl I went to primary school with, so she and I had a nice chat while he looked like he was wanted to die. He texted me immediately after I left to say how much he'd enjoyed it and that he'd a hidden a mix CD in my handbag (creepy) and wanted a second date. I declined and chucked the CD in a bin."

"We met online and after only three weeks of polite chatting, we decided to go to see a movie together. Back in those days, before children, I had seen everything on the list, except for the three hour 'flop' that I had, up until then, avoided. So, we bought tickets and food and walked straight in and picked our seats right at the top in the middle. There were only three other couples brave enough to put the bad reviews to the test. Before the lights dimmed, however, a rough-looking man stumbled up the stairs, followed by an awkward teenager who looked like that man's son. The father paused a few rows below us, looked up at my date, and said, in a very thick Texan accent: 'Is that you, L***? Heeeeey! Look what I smuggled in!' And he held up a six-pack! My date then had to introduce me to his uncle and cousin, two extremely colorful characters, who decided to join our date. I spent the whole three-hour movie thinking up ways to make an early exit. But, I am glad that I stayed; fast-forward 10 years, and we are married with three children and a mortgage. We have the DVD of the flop we saw that day but cannot bring ourselves to watch it again, as it was just so appallingly bad."

"We have nothing in common. He says a couple off-color things about an ex. I'm polite the whole date, until he asks me to go out again and I (politely) refuse, tell him I'm recently single after a bad breakup and not trying to get close to anyone at this point. Homeboy begs, tells me that he's good at cunnilingus. That was the end. After I left, he sent me an angry email telling me I wasted his time and that if I wasn't willing to go on a second date, I shouldn't have gone on a first one. I actually wrote him back and told him all the REAL reasons I refused the second date, and he wrote me back and thanked me for my honesty. So it ended well. That was my last bad date before I met me now-husband. I told a version of this story as part of my wedding vows."

"He tells me all about how he's in favor of building a wall and that he's voting for Trump (for over an hour), then turns to me, looks me up and down, and tries say seductively, 'So what are we doing next?' I laughed in disgust and said 'I'm going home.'"

"I was on my very first date after 19 years of marriage and then a painful divorce. A nice man contacted me on a dating website and invited me to have coffee. We sat down, and he asked me a few questions. After an hour or so, he gently asked, 'Would you like to know anything about me?' In my nervousness, I had talked the whole time, prattling on about topics ranging from fencing a garden to the mouse in my kitchen. For a person who prides herself on being an excellent interviewer, it was an epic humiliation. We never spoke again after we shook hands goodbye."

See? Yours really isn't so bad after all.