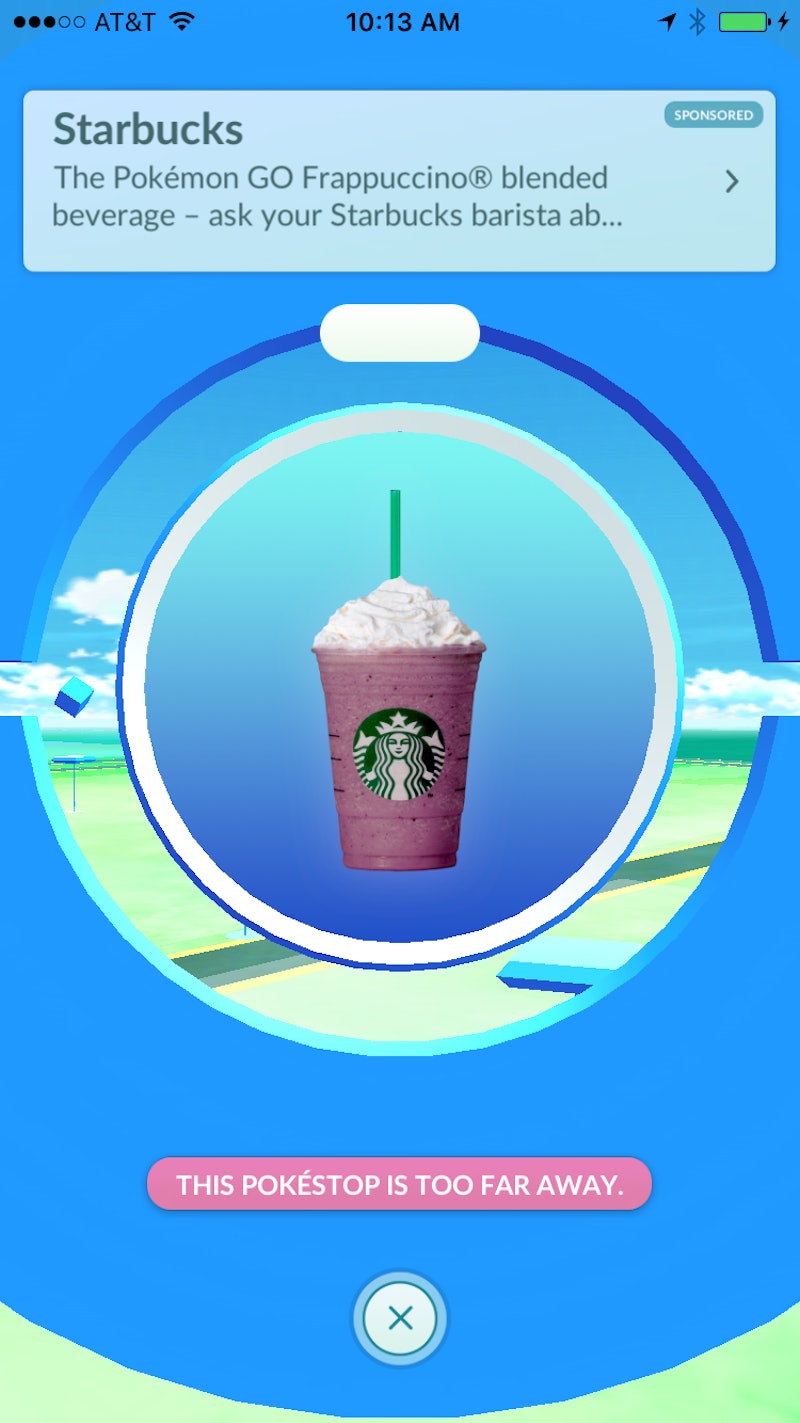 "Pokemon Go" Frappuccinos became available at about 7,800 Starbucks locations all over the United States starting Dec. 8, according to a press release. What's so special about these 7,800 locations? They are all now PokeStops or Gyms, which you can find while playing "Pokemon Go." Yep, that's right: You can get the "Pokemon Go" Frapp at any Starbucks that is now a PokeStop or a gym in the game.

To find out if you can get a "Pokemon Go" Frappuccino at a Starbucks near you, open the Pokemon Go app on your phone while you're in or right outside a store. See if the Starbucks you're at appears as a PokeStop or Gym in the game, and if so, you're one order away from sipping on a Frapp! What's more, you don't have to play "Pokemon Go" to order the drink; it'll be available at all participating Starbucks stores in the United States. Indeed, Bustle's Lily Feinn discovered when she went to her local Starbucks today to get one that all she had to do was ask for it; she didn't need to have the "Pokemon Go" screen showing the Frappuccino pulled up on her phone.

A Starbucks PokeStop where the Frapp is available should look something like this when you tap on it:

Whereas in the case of a Gym, it'll look like this:

I feel like this makes the augmented reality game even more enjoyable than before, because the Starbucks Frapp is like a secret menu item that nobody knows how to get except for players who find the right locations.

If you're wondering whether the new Frapp is up your alley, it's a blended beverage made up of a Vanilla Bean Frappuccino with raspberry syrup and freeze-dried whole blackberries blended together, topped with whipped cream. Most Starbucks drinks are delicious IMO, but the "Pokemon Go" Frappuccino sounds particularly tasty, especially since I love fruit.

It's not clear exactly how long these "Pokemon Go" Frappuccinos will stay on the menu. The press release notes that it will be available "while supplies last," so we do know that the beverage won't be around forever. I know that I'll be spending my next lunch break playing a game of "Pokemon Go" long enough to find a Starbucks Pokestop. I mean, I didn't exactly need another incentive to play "Pokemon Go"... but it certainly doesn't hurt, either!

More like this
Remember These Ancient Pieces Of '90s Tech?
By Lucia Peters and Emma Carey
11 Trends From The ‘90s That Made You Feel So Cool
By Julie Sprankles
The 'Hocus Pocus' Sequel Finally Has A Release Date & It Makes Total Sense
By Shannon Barbour and Radhika Menon
Starbucks’ Chocolate Cream Cold Brew Tastes Like This Retro Candy
By Emma Garza
Get Even More From Bustle — Sign Up For The Newsletter