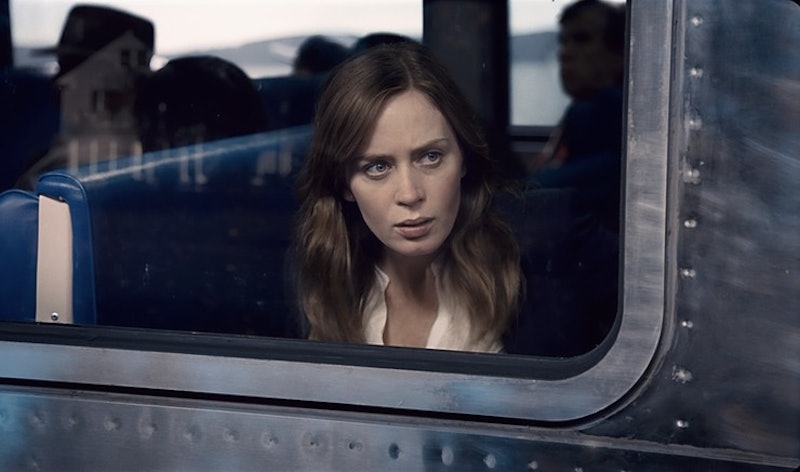 Psychological thrillers written by women have been flying off the shelves — and Fiona Barton and Clare Mackintosh are two of the biggest names in the genre. The two British authors have had huge success in the U.S. with their debut novels, each of which explore human nature in the fall-out of a terrible crime, and each of which have become New York Times bestsellers. Fiona Barton is the author of The Widow , which comes out in paperback in January 2017, and Clare Mackintosh is the author of I Let You Go, as well as the soon-to-be-released I See You , which will be out in February 2017. (Though if the wait is too unbearable, you can read the first chapter on Bustle!)

The novels have received rave reviews on both sides of the Atlantic, but Clare Mackintosh has found the "enthusiasm" of U.S. readers particularly enchanting. "Perhaps they're not quite as reserved as U.K. readers," she tells Bustle. There certainly has been a flurry of excitement around the books, which appeal to the same readers of Gone Girl and Girl on the Train , while still managing to do something totally new.

On the trend for female-driven thrillers, Fiona Barton suggests we have feminism to thank. "Women characters aren't just the body in the ditch anymore," she explains. "And so the angles taken by writers now — women writers — they speak to me. They treat the sort of issues I'm interested in." Certainly, Barton and Mackintosh touch upon important feminist issues in their own writing, from domestic abuse and victim-blaming to the public shaming of mothers who are seen to be anything less than perfect.

They also fit into the subgenre dubbed "domestic noir," a term used by novelist Julia Crouch to describe any novel that "takes place primarily in homes and workplaces, concerns itself largely (but not exclusively) with the female experience, is based around relationships and takes as its base a broadly feminist view that the domestic sphere is a challenging and sometimes dangerous prospect for its inhabitants." Bringing thrillers into a domestic setting is particularly terrifying; as Clare Mackintosh points out, "It’s where we feel safest, so if that’s threatened, that’s our worst nightmare."

Interestingly, neither author originally sat down to write a psychological thriller. Mackintosh spent most of her career as a police officer — and says, "I just wrote the story in the way it wanted to be told. When I was a police officer I would piece together the different elements of an investigation ... So it was a very instinctive way of structuring a novel for me." Similarly, Barton spent many years as a journalist, and says that "people are always what I've been interested in." Becoming an author has been a "wonderful surprise," she adds.

Perhaps because of their past careers, both authors agree that character is far more important to a story than plot. Mackintosh explains, "You will always have some readers who guess what’s going to happen, who are able to see it unravel, [but] it actually shouldn’t matter, because there should be so much else in the book. And a lot of that I think is down to having really well rounded characters." Barton agrees: "When you look at films like Apollo 13 , we all knew what the end was — but you are so engaged by the characters that you want to know how they cope with it, how they change during the story."

If you can't get enough of these character-driven thrillers, Mackintosh has recommended Gillian McAllister's upcoming Everything But The Truth, due out next year.

Of course, as well as having wonderfully complex characters, these books are seriously scary — and apparently, they were just as frightening to write as they are to read. "I used to type with my eyes shut," admits Mackintosh. "Every now and again I would be caught off guard by a small child creeping down the landing and opening the door to my office, and it would absolutely scare me witless." For Barton, the most chilling part was getting inside the more sinister characters' heads. "I would lose myself in a character and feel very chilled afterwards, having written things that are so alien to me."

Despite writing so realistically about criminals, prison is a "worst nightmare" for Mackintosh, and she can't imagine ever committing a premeditated crime. The most likely offense she can conceive of committing is "a crime of passion;" or perhaps "tax fraud," as Barton jokes.

I Let You Go by Clare Mackintosh, $10, Amazon

For aspiring thriller writers looking to write the next Gone Girl, Barton warns against following a formula. "Write the story that you’re passionate about," she says. "Don’t set out to write one particular genre; it might become something else." Mackintosh agrees: "I did plot myself into a corner a lot with [I Let You Go], and not quite so much with my second book, because by then I’d learned to trust my characters a bit more, and to let the story evolve a bit more organically."

And if you're just staring at a blank sheet of paper, Mackintosh advises that writers should "start with a character and a premise — a "What if?" question — and then just see where the characters take it." Don't worry if you don't have all the details yet, as Mackintosh says the process is just like "coloring in." You can start with a "preliminary pencil sketch," she explains, "and then each draft adds another layer of description or suspense or pace or plot."

And here's the best part: even once you've devoured I See You the second it comes out next year, there's more to come. Clare Mackintosh is currently working on her third book, about a woman in prison for something she claims she didn't do — and Fiona Barton's next book The Child will see the return of journalist Kate Waters, this time investigating the skeleton of a newborn baby found on a building site. While Barton says she is "absolutely loving writing full time," both authors admit that the pressure of writing a second (or even a third) book after a successful debut is "immense." Well, I think we can safely reassure them: we'll eat up every word they give us.