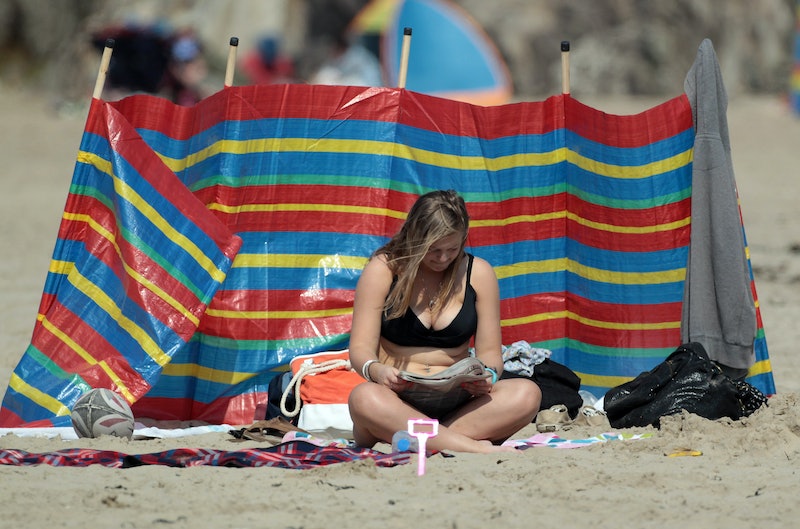 As the wintriest days of the year approach, a good book that can transport me anywhere else is a basic necessity. No novel does that better than a nail-bitingly suspenseful mystery. Mostly because I'm so wrapped up in trying to figure out whodunit, I don't even care that it's zero degrees outside. One of the best feelings to have as a mystery-lover is being scared silly to turn the page and at the same time absolutely needing to do it because OMG what could happen next?

Nobody brings the creepy better than women mystery and thriller writers. The literary world has always been a bit of a good ol' boys club, but since Anna Katharine Green, "the mother of the detective novel," published The Leavenworth Case in 1878, right up to the Gone Girl frenzy, women writers have excelled in the genre. Not that there aren't plenty of talented male mystery writers as well, but I always find myself gravitating toward the subtlety terrifying tales of female suspense writers.

So find a comfortable, well-lit spot and get ready to be skillfully creeped right out of your winter doldrums by the female mystery and thriller writers on the following list. You'll be so busy sleuthing, you won't even notice the polar vortex swirling outside.

Mina has been writing "tartan noir" since the late '90s. Her work is similar to that of Kate Atkinson and Tana French, but Mina's creations are grittier, her outlook less sentimental and yet more damning of the deep-rooted social problems that lead to delinquency in the first place. Although the suspense is taut and the crimes are often heinous, Mina's characters are the best parts of her books. She's written several series, each with an intrepid, if flawed, female lead. So if you look for excellent characterization and astute psychological evaluation in your crime books, Mina's your girl. Fun fact: Mina also did the amazing graphic novel adaptations of Stieg Larsson's Millennium novels.

Start With: Still Midnight . The Glaswegian detective Alex Morrow is my favorite Mina character yet, and she just gets better as the series progresses.

King became the, er, queen of Sherlock Holmes pastiche/fanfic with the creation of her most famous character, Mary Russell. After a chance encounter with a semi-retired Sherlock Holmes, the young American Russell becomes Holmes' protege and eventual wife. Mary Russell is a brilliant detective in her own right, though, and her exploits and escapades both with and without Holmes are not to be missed. Unfortunately Benedict Cumberbatch doesn't make an appearance, but if you're a fan of Sherlock, Elementary, or Holmes in general, you'll love King's clever, feminist twist on the classic canon.

Start With: The Language of Bees . Although this is the ninth book in the Mary Russell series, it's my favorite because Russell really comes into her own.

Gran's wise-cracking, hardboiled private investigator, Claire DeWitt, is probably my favorite of the bunch. Gran's novels have a distinctly noir-ish feeling, and appropriately DeWitt is a bit of a mystery herself. DeWitt considers herself a "natural-born" detective. Trained by an enigmatic Frenchman, she relies on intuition, lucid dreaming, and drug-induced visions as heavily as forensic evidence to solve a case. As you can imagine, this makes for some pretty fascinating detective work. DeWitt's unorthodox methodology is just one of the many masterful aspects of Gran's writing. If you're looking for an ingenious modern take on classic crime mystery, check out Gran.

Start With: Claire DeWitt and the City of the Dead. This is where DeWitt's story begins, and it's set in The Big Easy, where mysticism and mystery go hand-in-hand.

The genius of Barbara Neely's award-winning writing lies in the way that she combines the mundane and murder into one compulsively readable whole. Her main character, Blanche White, is just a normal middle-aged woman who does domestic work for a living. Even when she turns amateur, albeit very successful, sleuth, she still makes mistakes, turns to her friends for advice, and never loses her sense of humor. Neely was really a pioneer for female African-American mystery writers, and she has used Blanche's casework to send powerful, prescient, political and social messages. If Toni Morrison wrote murder mysteries, they would probably read a bit like Barbara Neely's.

Start With: Blanche on the Lam . Blanche's initial introduction to the sleuthing life is too good to miss.

Maybe there's something in the water way up there in the northern hemisphere that grows incredible crime mystery writers. Whatever the reason, Sweden has certainly given us some super-talented suspense writers, and you can add award-winning Larsson to that list. Her protagonist is, believe it or not, a tax lawyer, a profession Larsson herself practiced before she became a published author. Unlike most tax attorneys (I would assume), Larsson's Rebecka Martinsson finds herself in all manner of sinister and dangerous situations. Think lots of brutal, ritualistic murders and mutilated bodies. Fans of Stieg Larsson and Jo Nesbø will devour Larsson's atmospheric thrillers.

Start With: Sun Storm . You need to start with the first book, otherwise you'll miss the fascinating backstory on the enigmatic Martinsson.

Native New Yorker Rozan brings a sharp wit and a keen observational eye to her well-written thrillers. Likely due to this, she's won a slew of awards, including the prestigious Edgar, awarded by the Mystery Writers of America, and the Nero, an annual award recognizing excellence in the mystery genre. Chinese-American private investigator Lydia Chin and her partner, Bill Smith, are Rozan's most famous and enduring characters, a clever, entertaining duo who never miss a clue. Rozan really has a knack for bringing the setting of her novels to vibrant life, from New York's Chinatown to Shanghai. The sharply drawn locales and fully realized characters make Rozan a master of the genre, and the sinister atmosphere she creates will have you looking over your shoulder.

Start With: The Shanghai Moon . Although this is the ninth installment in the Chin-Smith series, it's my favorite, and I think it showcases Rozan's considerable talents the best.

Highsmith was a master at creating psychopathic characters who seem like normal people. In the dark world of her novels, good intentions are eventually twisted into something grotesque, and love is always something to kill for. In a nutshell, her work is simultaneously terrifying and impossible to tear yourself away from. Her novels feature ordinary people whose willingness to arbitrarily murder is really the only thing that separates them from the rest of us. You've probably seen at least one of her novels adapted for the big screen: The Talented Mr. Ripley, maybe? If you liked it, you have to read her books.

Start With: Deep Water. This book scared me senseless. It still gives me nightmares and I read it years ago.

Why Millar is not a more recognized name in the noir genre is a mystery (seriously) to me, but regardless of her lack of fame, she was a brilliant suspense writer. Not unlike Highsmith, Millar wrote about the descent of seemingly ordinary people into paranoia, madness, and eventually murder. (In fact, she beat Highsmith out of the Edgar Award in 1956.) She often wrote about women who are crushed under the weight of domestic duties, unfulfilled dreams, and unrequited desires. Her novels are true psychological thrillers, designed to artfully manipulate the reader. Basically, Millar is the original Gillian Flynn.

Start With: Beast in View. It's Millar at her finest — and creepiest.

The grande dame of criminal mystery writers, Cornwell breathed new life into the genre when she created medical examiner Kay Scarpetta. More than 20 years later, Cornwell is still delivering chills and thrills as Scarpetta and her crew continue to solve the seemingly unsolvable. Cornwell's series is credited for starting the pop culture obsession with all things forensic, so if you're a fan of crime shows like CSI and Cold Case, you'll probably love these books.

Start With: Cruel and Unusual. Scarpetta is at her dry, brilliant best in her fourth novel, and the serial killer is creepy as hell.

Beukes' books are genre-defying works of creative genius. They are crazy, mind-blowing blends of science fiction, horror, social commentary, fantasty, and thriller. Beukes' best work focuses on place as much as characters, (Detroit, Chicago) and how our environment influences our behavior, both good and bad. Although her crime novels certainly have a surreal element, don't be fooled, you'll be scared silly.

Start With: The Shining Girls . The premise of this book is absolutely chilling and totally original.

Award-winning mystery writer Rendell also writes under the name Barbara Vine. Creator of the famous Inspector Wexford series, (it was adapted for television) Rendell is one of the most prolific and pioneering women in the genre. Her novels are well-crafted, psychologically astute, and entertaining. If you like Robert Galbraith's novels, you should definitely check out Rendell.