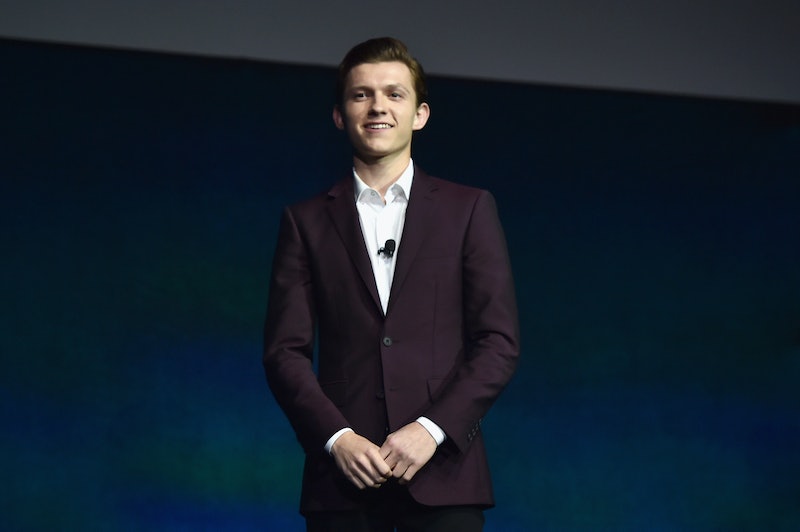 Josie Geller has officially become an inspiration for Spider-Man star Tom Holland. As '90s kids are well aware, Josie is Drew Barrymore's iconic character from Never Been Kissed who goes undercover at her old high school for a story. The premise is endearing, but it always seemed a little far-fetched. At least it did until Holland enrolled in a New York City high school to research his role of Peter Parker for the latest Spider-Man movie.

Holland revealed his undercover high school project himself during a Q&A on the official Spider-Man Facebook page, according to Nerdist. The 20-year-old actor grew up in England where he had a high school experience completely unlike the one Peter has in NYC. Holland went to an all-boys school complete with uniforms, so he decided he needed to see firsthand what the American high school experience is like. He enrolled for three days during which time he experienced a bit of a culture shock as he shared a classroom with girls for the first time.

"It was really fun," Holland said during his Q&A. "It was really interesting because New York high schools are so different to schools that I went to in London. Where I went to a school where you have to wear a suit and tie and it’s all boys, and for me it was the first time that I was in a classroom with girls. It was a really strange experience, it was really fun."

I think everyone can agree Holland needs to be the lead in a Never Been Kissed remake in between his stints as Spider-Man, right? Besides, his story only gets better from there. Not only did Holland enroll with a fake name and a fake accent, he also divulged his secret to one kid. However, when he told his classmate he was Spider-Man, his confession was met with complete disbelief. That certainly lends a certain amount of credibility to Peter being able to keep his identity secret.

The kid Holland confessed his true identity too is likely freaking out now. Sadly, if he tries to tell his friends he took a class with Spider-Man for three days, they are probably going to disbelieve him just like he disbelieved Holland. At least he now understands the burden of having a secret identity.

Meanwhile, Holland now has an American high school experience to draw from, even if it was on the short side. "No one believed me," Holland revealed. "Which is actually a good thing, because it makes me think that if Peter Parker went up in his school and was like 'I'm Spider-Man,' everyone would be like ‘Nah dude, no you’re not."

Whether it was his brief foray into the American school system or just his natural talent, Holland is the perfect Peter Parker. The Spider-Man Homecoming trailer was quip-filled, full of awkward teen boy antics, and all the thrilling heroics a Spider-Man fan could hope for. And hey, now fans can rest assured Holland can carry Peter from high school to his Daily Bugle days without missing a step. He clearly has a talent for investigative journalism and web slinging.