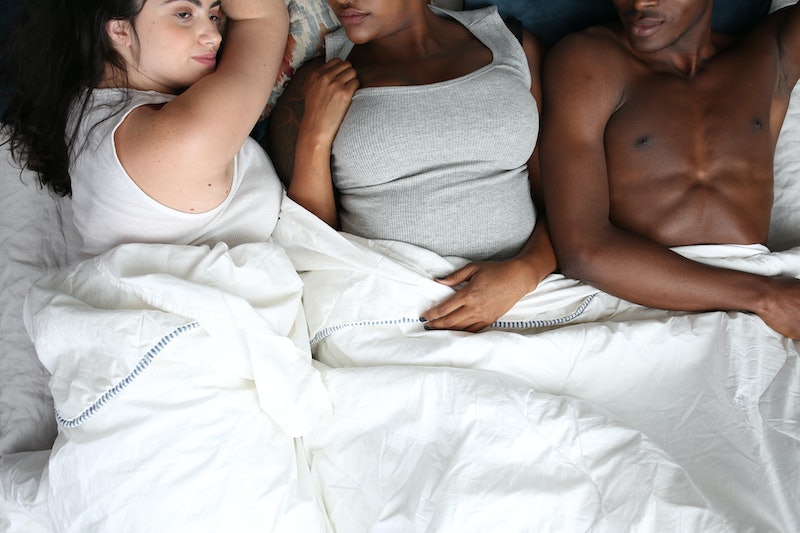 Opinions. Everyone has them, and they will throw them at you whether you ask for it or not. As the holidays are fast approaching, you may be gearing up to come out to your family about your non-monogamy. Or, the word may have already gotten out, and now you’re bracing yourself for the inevitable barrage of questions and un-asked-for opinions about non-monogamy you’ll get from well-meaning (but annoying) relatives.

If you have been polyamorous for a while, you start to get used to answering certain questions (people usually ask about either jealousy or your sex life.) After six years of being polyamorous and two years of coaching people in non-monogamous relationships, I have yet to encounter a question, opinion, or critique of non-monogamy that I have never heard before. Every Q and A, discussion, and debate with friends, family, and random strangers has been a great opportunity to practice fielding all kinds of responses, and to help others do the same.

It’s impossible to predict everything your family may say to you over the dinner table this holiday season, but here’s a play-by-play guide to handling the most common questions and criticisms of ethical non-monogamy with smarts and grace.

There’s a phenomenon that occurs whenever you talk about any relationship that is non-monogamous and/or non-heterosexual. People’s brains immediately go to sex — specifically the fact that the sex you are having is not “normal.” Considering that many Western cultures are sex-negative, even about vanilla sex, suddenly calling attention to your “abnormal” sex life makes you a target for slut-shaming, silencing, or other negative responses.

And that’s not even touching on the awkwardness of openly discussing your sex life with family members. If you’ve chosen non-monogamy solely for the purpose of getting it on with other people, it’s understandable that your family may find this to be TMI. But if you are seeking to have multiple ongoing relationships, it’s best to figure out what is the bare minimum of information to give that will assuage their concerns without adding to the already inherent awkwardness (unless they truly do have a burning desire to know the details of your safe sex practices.)

How to respond: “My relationships are based on intimacy and emotional connection, not just hooking up. I am aware that all forms of sex are risky, but I am taking precautions to make sure that both my partners and myself stay safe and healthy.”

Variations include: “Are you playing the field for now?” “Good for you for not letting yourself get tied down.” “When you find the right person, you’ll be ready to commit.”

The courtship game has traditionally been pretty black-and-white. Either you’re single, or you’re committed. The only time the existence of non-monogamy is culturally acceptable is during the shades-of-grey phase in-between being single and being committed: dating around. When your family sees you dating multiple people, it’s likely they’ll assume that you are in the midst of this playing the field process, and it’s only a matter of time before a clear winner emerges to sweep you off to the land of monogamous bliss.

So how to give them a reality check? The best method is time. The more time passes as you continue to grow, develop relationships, and find your happiness, the more clear it will become to your family that this may not be just a phase. However, when the people asking you this question are sitting there and looking at you expectantly, it may not be feasible to ask them to get back to you in a year or so.

How to respond: “I’m actually quite committed to my relationships, but my definition of ‘commitment’ may be a little different from yours. I am seriously committed to being the best partner I can be, and I’m committed to making sure that my partners and myself are happy, regardless of whether or not there is sexual exclusivity.”

Variations include: “Do you have sister-wives?” “Did you join a cult?” “Is this like Big Love?”

The term polyamory is slowly becoming an everyday term, but you will still run into many people who have never heard it. The word that most people have heard is polygamy — the practice of being married to more than one spouse. Most people associate modern day polygamy with Mormonism, thanks to popular TV shows like Sister Wives and Big Love.

Many people don’t realize that the Mormon church withdrew official support of polygamy over 100 years ago, and the church will even excommunicate any members found to be practicing plural marriage. But this doesn’t stop people from calling to mind uncomfortable images of cult leaders, child brides, and bearded men named Ezekiel amassing a collection of sister-wives.

It’s also important to note that the multiple-partner relationships historically practiced by the early Mormons were examples of polygyny — the practice of one man having multiple female partners. In contrast, the majority of modern-day polyamorous relationships are based on a foundation of equality that is not divided along gender lines.

How to respond: “Unlike the historical instances of Mormon polygamy, my relationships are equal opportunity — everyone involved is free to have multiple partners, regardless of their gender. My choice of relationship isn’t related to any spiritual or religious practice.”

Variations include: “Does your boyfriend/girlfriend/wife/husband know?” “That’s unethical.” “You can’t have your cake and eat it too.”

Some writers have labeled the modern day non-monogamy movement as “ethical” or “legalized” cheating. I don’t care for the phrase myself, but unfortunately non-consensual non-monogamy, otherwise known as infidelity or cheating, is most people’s only exposure to non-monogamy in relationships. In popular media, there aren’t many positive portrayals of non-monogamy, though this is changing.

But in regards to your family members accusing you of infidelity, it’s important to make a distinction. Cheating means going against the fundamental agreements that you and your partner made about the relationship. This means that it is possible to cheat regardless of whether you are in a monogamous or polyamorous relationship. If you and your partner(s) have agreed to be non-monogamous and to honestly and openly share what’s going on in each other’s dating lives, then going on a date with someone else might not be cheating, but lying about that date or acting like it never happened probably would be.

If it’s appropriate, it can help to have one of your partners there with you as part of the conversation. Your partner can help answer any questions, provide a slightly different perspective, and demonstrate without a doubt that you aren’t choosing to do this behind their back.

How to respond: “Cheating usually involves doing something behind your partner’s back and then lying about it afterwards to cover it up. Every person involved with me has full knowledge and has given their full consent. I build my relationships on a foundation of open, honest communication and trust.”

Variations include: “I’m sad that your relationship is falling apart." “Your boyfriend/girlfriend/wife/husband must not really love you.” “You can’t be happy this way.”

It doesn’t mean that your relationships are always going to be perfect, or that you will never have disagreements with a partner, or that you will never feel jealous or insecure. But provided that the benefits outweigh the negatives, you should feel no shame in continuing to maintain relationships that help you to thrive and bring more positivity and joy into your life.

How to respond: “My relationships may seem strange, but they are just one example of hundreds of different valid ways to create relationships. I chose this because it brings me happiness, love, and allows me to share that with others in my life.”

“You’re being taken advantage of.”

Variations include: “I just don’t want you getting hurt.” “This was your boyfriend’s/girlfriend’s/wife’s/husband’s idea, wasn’t it?” “You should break up with your boyfriend/girlfriend/wife/husband.”

Your family may initially react from a place of concern for your wellbeing — which isn’t a bad thing! This can serve as an excellent reminder that there are people who care about you and want to protect you. Make sure they know that you do not take that for granted.

But the other half of this response may involve vilifying your significant other, especially if you are opening up a previously closed relationship. If making your relationship non-monogamous was your idea in the first place, now’s the opportunity to let that cat out of the bag. If it wasn’t your idea in the first place, it’s important to reassure your family members that your voice carried equal weight when making this decision.

How to respond: “I appreciate your concerns for me. This is a decision that I made for myself, after a lot of research, soul-searching, and discussion with my partner. It isn’t always easy, but I wouldn’t have chosen to do this if I didn’t think it would make me happy.”

Regardless of how convincing you are, your family may still think your partners as shady characters. However, I’ve seen this attitude go full 180 after family members meet one or more of your partners. If you have an opportunity to introduce someone to your family, go for it! Meeting face to face serves to humanize your partners, demonstrating that they are regular, everyday people, rather than villainous masterminds plotting your next heartbreak.