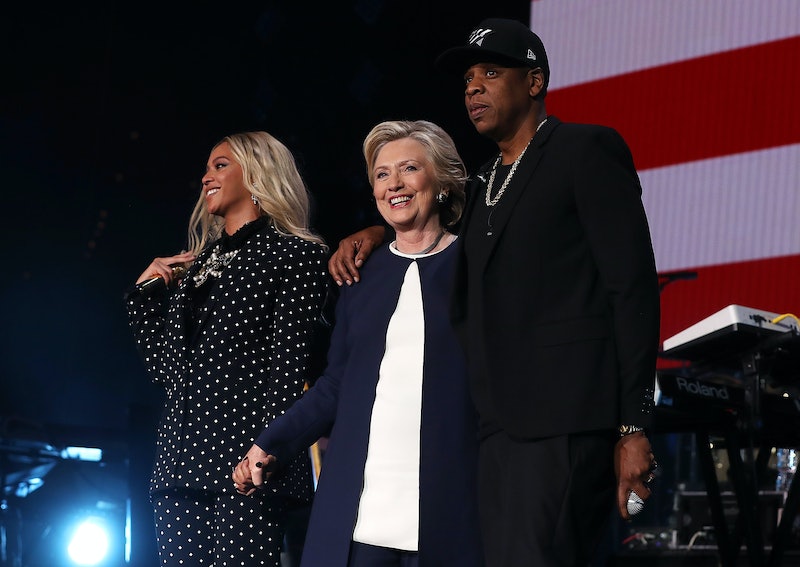 Many people will agree that 2016 was not the best year the globe has ever seen. It was a rough year — fraught with major celebrity deaths, some of the hottest temperatures on record (according to The Guardian), and a highly controversial election between Hillary Clinton and president-elect Donald Trump to top it all off. Clinton had garnered the support of many celebs during her campaign and there are many pro-Hillary quotes from celebs that everyone should carry into 2017.

While the year-long election had many a dark day, there were also some truly beautiful moments. Americans of all races, creeds, occupations, and shoe sizes came together to support one woman's attempt to shatter the highest of glass ceilings. Celebrities from Beyoncé to Lena Dunham to Lee Daniels came out in support of the former Secretary of State. Their contributions were often moving and can lend for some inspiring words for the next year. While we might not be ecstatic about where 2016 left off, there's always hope for a better year in 2017.

Feel inspired by the pro-Hillary celeb quotes below.

1."Because on Nov. 8 ... you’ll have as much say as any billionaire. Or, you can just cancel out your weird cousin’s vote if you like. Remember, it’s not where you come from, it’s what you grow into."

At the 2016 Democratic National Convention in Philadelphia, Katy Perry performed her single "Rise" and an oldie but goodie "Roar." Before she sang, she reminded us all that we are not defined by the past and just how much votes count.

While some people might be disappointed by the president-elect, the fact of the matter is this country has made vast improvements for minorities and women in the past one hundred years. Beyoncé's words at a rally she and Jay Z threw for Hillary Clinton in Cleveland days before the election can help us remain hopeful that despite the administration, women will still "run the world."

3. "Your voice does count and it can change the world."

After Lee Daniels and the cast of his show, Empire created an advertisement for Clinton, he spoke to People about the video. He reminds fans that every voice counts.

4. "I refuse to separate my politics from my pride in being a woman."

In a piece published in Time, Lena Dunham wrote about the many reasons she stood with Hillary Clinton. Her reminder that we should be politicized as women is a great battle cry for 2017.

5. "Once you divide us, you weaken us. We are stronger together."

Beyoncé wasn't the only one to get some choice words in at the power couple's hip hop rally in Cleveland. Jay Z's words are a call for unity. A valuable thought for 2017!

RuPaul used the catchphrase of his famous song "Supermodel" (and an on-point dancing lady emoji) in a tweet to Clinton in April. Working hard is a lesson for any time, but especially in the upcoming year, when people will have to fight for the rights of all Americans.

8. "Not everyone looks at the millions of young people like me – children born into struggling families, children born to immigrant parents, children who are immigrants themselves – and sees an investment."

Though America Ferrera was referencing Hillary Clinton as the "someone" who sees immigrants as a worthwhile investment during her speech at the DNC, this quote is also inspirational in another way. As they say, be the change you wish to see – if we aim to be more conscious about supporting immigrants to this country, 2017 might not be so bad.

9. "How dare anyone question a woman’s ability? Every person on this planet was brought into this world by a woman."

This quote from the singer/songwriter Pharrell William at a Clinton rally in North Carolina is so simple. No matter what the year, women are just as capable as men.

10. "....taking a stand against climate change, it’s not about politics—it is about our moral obligation to one another, and to our children, and to the generations who will one day inherit this beautiful earth.”

At the DNC n in July, Sigourney Weaver joined many other celebrities to share her two cents on what seemed to be an inevitable Hillary victory. Weaver's talk of "moral obligation" to our fellow man by way of caring for the earth is a super valuable thought to take into 2017 — especially in those moments when you're too lazy to properly recycle.

During the election, in May 2016, Bryan Cranston went on Real Time with Bill Maher to discuss his dark feelings about the country's upcoming decision. He passed advice on to the Democratic nominee, a note to stay positive and not get caught up in her opponent's energy despite the "vortex" of negativity shrouding Trump. That's something we can all think of in 2017 — not letting the angry sads kick in.

Comedian (and goddess) Sarah Silverman started out as a gung-ho Bernie supporter, but when the Democratic National Convention rolled around, she was ready to fight for a unified party for Hillary. She mentioned that though Bernie was the guy who made everybody start worrying about progressive issues, Clinton could lead the charge. Silverman quoted Clinton's words and it serve as a passionate means of working together to make change, "it takes a village" to ensure equality for all.

In October, John Legend returned to his home state of Ohio, which also happens to be a swing state, to perform at a rally for Clinton in Cincinnati. The singer and songwriter performed his hits while also extolling the importance of a candidate who's willing to make progress. Despite what may feel like an extreme lack of progress, everyone can continue to press forward.

14. "If we are true, true Americans, we must go from viewing his followers as our adversaries to viewing them as our allies. What does she say? What do we say? We are stronger together. "

At a rally in North Carolina on the eve of election night, Lady Gaga joined Jon Bon Jovi in saluting Hillary Clinton. Gaga echoed Clinton's sentiments that "we are stronger together" and pointed out that even if people disagree with our fellow Americans, the country is weaker if we do't work together as a nation.

15. "You know I like to be politically correct, but sometimes I’m politically incorrect. But I’ll say that I would love to see a woman in office because I feel like we’re at that stage in life to where we need a perspective other than the male’s train of thought.” 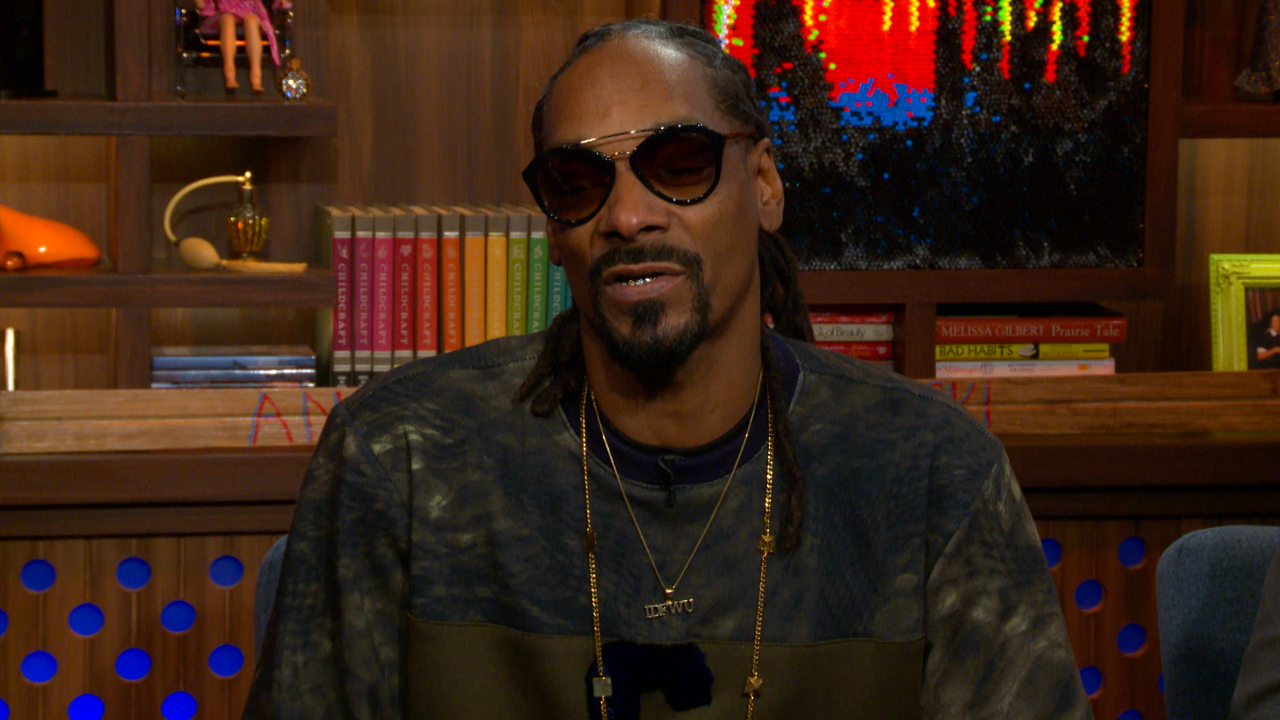 Snoop Dogg appeared on Watch What Happens Live in May 2016 to throw his support behind Clinton. His opinions about the U.S. needing a different presidential perspective other than a male one is something that pretty much applies everywhere in every field in America. You tell 'em, Snoop.

16. "This is someone who I feel goes home and thinks about us."

In an Orange is the New Black-themed advertisement for the Clinton campaigns, co-stars Dascha Polanco and theater and television actress Uzo Aduba got together to spread the Hillary love. Aduba lends some comforting words, which point out that Clinton truly seems to care for the well-being of the American people. It will be nice to think about someone in the political sphere caring about the people in 2017. Even if she's not president.

Glee actor Chris Colfer reminisced about his '90s perspective of Hillary Clinton on SiriusXM Progress. He spoke of the deep admiration he felt for Clinton when she was tirelessly working to change the responsibilities and impact of a First Lady. Just like she hopped on past all those "no's," so can everyone in 2017!

2016 was certainly not easy, 2017 seems intimidating, and sometimes I wish I could just time travel back to the excitement of Obama's 2008 election. Unfortunately, time travel hasn't been discovered (yet) so to survive 2017, the best tip and trick is to grab some positive wisdom from some of our favorite celebrities. Sometimes a pep talk goes a long way.

More like this
Yes, Billboard Queen Angelyne Really Ran For Governor Of California
By Brad Witter
Kim Kardashian Remembers Her Last Words To Death Row Victim Brandon Bernard
By Jake Viswanath
Cardi B Explains To David Letterman Why She Uses Her Star Power For Politics
By Jake Viswanath
10 Times Diana & Meghan Spoke Similarly On The Royal Family
By Sophie McEvoy
Get Even More From Bustle — Sign Up For The Newsletter