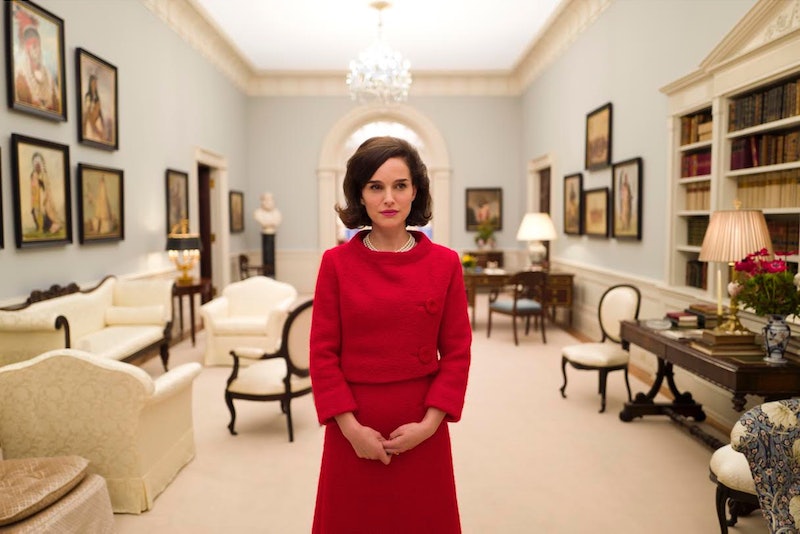 When you think about diversity controversies that surround the annual Hollywood awards season, you probably think about the trending hashtag #OscarsSoWhite and that ceremony's recent (and unfortunate) tendency for nominating all-white acting categories. But the Academy Awards are far from the only awards ceremony to have diversity problems, and race is far from the only facet of diversity that needs some attention. Look no further than the lack of women-led movies in the 2017 Golden Globe nominations, which sadly prove that Hollywood still has some big strides to make in terms of gender equality both onscreen and off.

While the Best Picture - Musical or Comedy category made room for two female-led movies (20th Century Women and Florence Foster Jenkins) and one movie with a female co-lead (La La Land), it's widely known to be the lighter of the two top categories, playing second fiddle to the crown jewel that is the Best Picture — Drama race. And this year, that category dismayingly features five films that all revolve solely around male protagonists: Mel Gibson's WWII movie Hacksaw Ridge, the modern-day Western Hell Or High Water, the heart-tugging true story Lion, the wrenching indie drama Manchester By The Sea, and the coming-of-age story Moonlight.

Now, to be clear, these are all great movies (their scores on Rotten Tomatoes range from 82 to 98 percent), but they're no qualitatively "better" than movies with female leads or co-leads that for one reason or another failed to make it into the Best Picture - Drama race. Movies like: Jackie (88 percent), Elle (89 percent), Loving (89 percent), Arrival (93 percent), or Hidden Figures (94 percent). When we're talking about which Golden Globe-nominated films deserved the honor of one of the five Best Picture slots, we're really splitting hairs; these are already the cream of the crop of 2016's movies, and you can make a case for any of them cracking the top category. So why is it that only movies with male heroes did this year?

It's a discouraging step back from last year, where three of the five nominees in the same category featured female protagonists: Carol, with its lesbian lovers played by Cate Blanchett and Rooney Mara; Mad Max: Fury Road, in which its title character was overshadowed by Charlize Theron's kickass Imperator Furiosa; and Room, featuring soon-to-be Oscar-winner Brie Larson as the ultimate abuse survivor. (Those three films were joined by ensemble drama Spotlight, in which Rachel McAdams did a lot of heavy lifting, and winner The Revenant.)

The year before last wasn't much better than this year's offerings, with only one of the five nominees even featuring a female co-lead (the Stephen Hawking biopic The Theory Of Everything, based on his ex-wife's memoir). But before that, the Golden Globes actually had a fairly good track record with women-centric films, nominating at least one or two every year: Gravity, Philomena, Zero Dark Thirty, The Help, Black Swan, Precious, The Reader, Revolutionary Road, Atonement, The Queen, Little Children.

In fact, you have to go all the way back to the 2006 ceremony, the year Brokeback Mountain took home the top prize, to find the last case of a ceremony without a single female-led Best Picture - Drama nominee — until now. (That year, like this one, also relegated its women to the Musical or Comedy category, which boasted Mrs. Henderson Presents, Pride & Prejudice, The Squid And The Whale, and Walk The Line.)

So what gives? We could take solace in the knowledge that this appears to be somewhat of an exception to the rule for the Golden Globes — if it weren't for the fact that this drought has now happened twice in the past three years, and that this one came immediately after what was perhaps the most encouragingly women-centric Best Picture crop in memory. They say that the pendulum swings both ways, and in this case it seems to be true. Perhaps the 90 voting members of the Hollywood Foreign Press Association, were content to put their weight behind more "traditional" fare this time around.

Whatever the reason, it's certainly not great timing — or great optics — to see a bevy of compelling stories about the lives of complex women get usurped by a group of hyper-masculine nominees (excluding Moonlight, which, while about a man, is specifically about a young black queer man's struggles with hyper-masculinity). With this year's Golden Globe nominations already a foregone conclusion, the best we can hope for is that the Oscar voters will take note of this oversight and think about it when they're down to that last slot on their ballot and deciding between two otherwise equally-deserving films.

Then we can hope that the pendulum might once again since the other way next year — and maybe even get a little stuck this time.

More like this
Gassed Up Promises All Things Action, Risk, & Redemption
By Frances Stewart
Florence Pugh Won’t Discuss Harry Styles Sex Scenes In 'Don’t Worry Darling'
By Grace Wehniainen
Here’s Where Manti Te’o Is Now
By Arya Roshanian
Everything To Know About 'The Hunger Games' Prequel Movie
By Grace Wehniainen and Radhika Menon
Get Even More From Bustle — Sign Up For The Newsletter