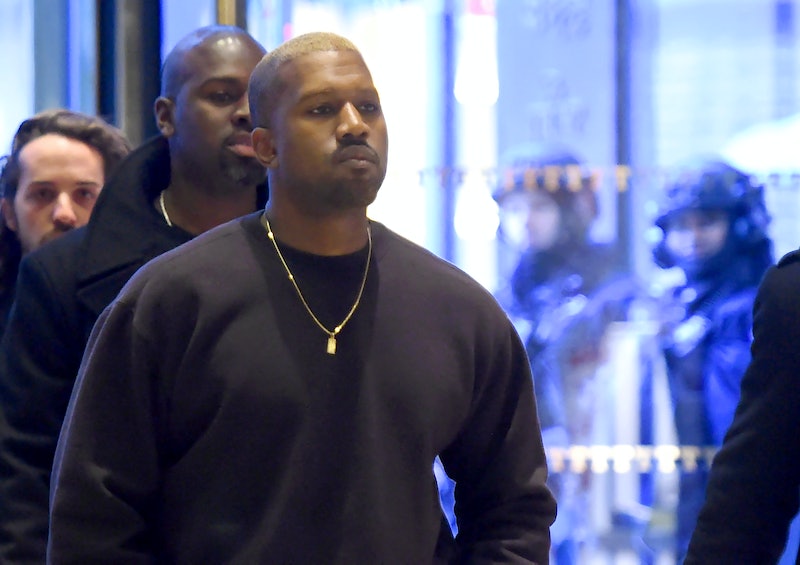 Well, whoever said that Tuesdays weren't eventful, obviously never predicted Kanye West's most recent activity. The internet is abuzz with the news that West is meeting with Donald Trump. Yeah, let that marinate for a second. The rapper strode into the place as if he owned it, which begs the question, has he been there before? And, better yet, have Kanye West and Donald Trump met before?

Before we get into the history between the two oft compared personalities, let's take a closer look at exactly what went down at the president-elect's building. West entered, surrounded by a posse of people, looking cool, calm, and collected despite the barrage of photographers. He avoided their questions as to why he was there, but he did greet them with a cordial, "Hey." So, you know, that's something. All in all, Ye seemed to be feeling quite confident in the home of a president-elect who a substantial amount of people don't have confidence in.

That abundant pride extended to the actual mingling between West and Trump in front of the cameras. And, perhaps even more so when they both directly addressed the press together, standing side by side. While slightly perplexing, it all makes a lot more sense when Trump describes the two as "friends."

So, about that whole, "have they met before?" inquiry? Yeah, Trump goes ahead and answers that himself. In the video, the president-elect says Yeezus is "a good man" and explains that "We've been friends for a long time." The two even share a considerably awkward side hug and engage in a less awkward but still strange-to-witness handshake to punctuate that point.

While this revelation may come as a surprise to some, I suppose we shouldn't be caught too off guard by it. As Bustle previously relayed, last month at his concert, West proclaimed that if he had voted, it would have been for Trump. Friends supporting friends, perhaps? Of that I am not sure. All we do know is, that both West and Trump presented what looks to be a united front to the press today regarding their meeting.

More like this
Are John Legend & Kanye West Still Friends? The Singer’s Latest Update Is Candid
By Brad Witter
Kanye West Has The Most Kanye Reaction To Kim Kardashian & Pete Davidson's Split
By Jake Viswanath
Pete Davidson Runs To Shower With Kim K In 'The Kardashians' Season 2 Trailer
By Jake Viswanath
Kim Kardashian Pays Homage To Kanye West’s Fave Film In New Swimwear Pics
By Bustle Editors and Maxine Harrison
Get Even More From Bustle — Sign Up For The Newsletter