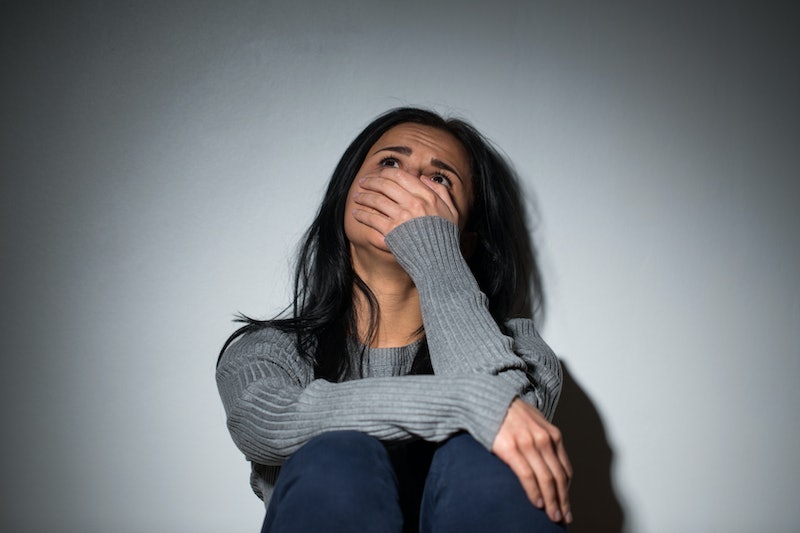 If you're a New Yorker, you're probably familiar with Humans of New York, which showcases quirky or inspiring stories of New Yorkers on Facebook and elsewhere online. But on Sunday, the series dealt with a heavier subject than it often does: Rape and sexual assault. This Humans of New York post about sexual assault tells the powerful story of a woman who wasn't able to come to terms with her own rape for years because it didn't match the stereotypical stranger-in-the-alleyway version of sexual assault that women are often warned about. It's one more example of how skewed our culture's understanding of rape is — and it reminds us of an absolutely essential truth about consent.

Like the majority of sexual assault victims, the anonymous woman in the HONY story knew her rapist. Another common but non-stereotypical aspect of the scenario was that she'd been physically involved with him before. “It was the summer between eighth and ninth grade. We were make-out buddies," her story reads. Her assault did not involve explicit consent but also didn't involve a verbal "no," and unfortunately, such rapes are often not taken as seriously either.

As the post describes, her make-out buddy repeatedly pressured her to have sex, and she repeatedly fended off his advances by saying "maybe" — what's known as a "soft no," something which women often use because our culture has convinced us that to say "no" is to be rude (even though saying "no" and being rude are not, in fact, the same thing at all). Eventually, he decided to stop listening to her and take the situation into his own hands. "No more maybes. Let’s flip a coin," he said — and, of course, the coin said what he wanted. "It took five years for me to realize that consent is not a coin flip,” the woman said.

Because of the differences between her assault and the stereotypical one rape culture feeds us — the fact that they were already making out, the fact that she said "maybe" instead of a hard "no," etc. — she didn't know she was raped. And what's more, not knowing whether an assault or a rape actually is an assault or a rape is all too common. A study in Gender & Society found that many girls don't report sexual assault and harassment because they don't think what happened to them was a big deal and don't think others will believe them. Another survey sponsored by the U.S. Department of Justice found that 35 percent of victims didn't report because it was “unclear that it was a crime or that harm was intended.”

The first step toward healing from sexual violence, whether a victim reports it or not, is acknowledging that it happened. The woman in Humans of New York's story fortunately was able to come to this realization. Hopefully, by reading her account and others like hers, other victims will be able to realize that if a sexual interaction they did not consent to took place, they were sexually assaulted, regardless of their relationship with the perpetrator or what they did or didn't say when it happened. As she wrote, consent is an explicit, enthusiastic agreement — not a coin flip.

More like this
Sandra Bullock, Girlboss Extraordinaire
By Matt Harkins & Viviana Olen
How The City Healed Five Years On From The Manchester Arena Attack
By Ella Glover
The 'Hocus Pocus' Sequel Finally Has A Release Date & It Makes Total Sense
By Shannon Barbour and Radhika Menon
10 Times Boris Johnson Got It Wrong On Trans Rights
By El Hunt and Sam Ramsden
Get Even More From Bustle — Sign Up For The Newsletter