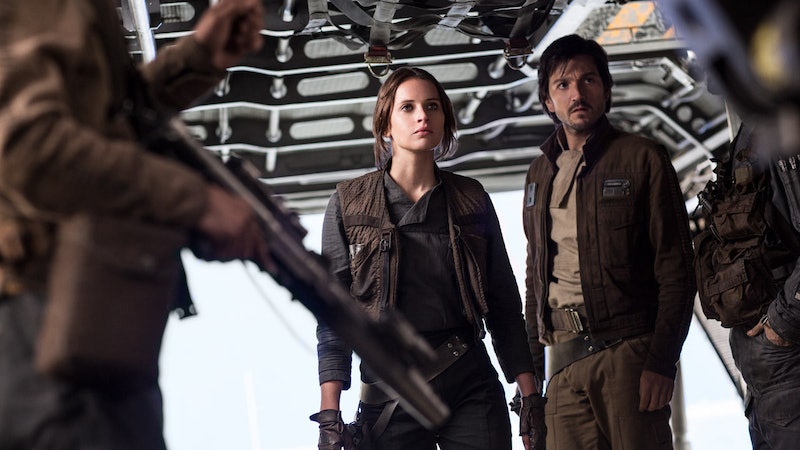 Ever since fans got their first glimpse of Jyn Erso, the newest Star Wars heroine introduced in Rogue One: A Star Wars Story, they have been desperately trying to place her within the already known Star Wars cannon. Could she brush elbows with Han Solo or befriend Yoda —these questions and more floated around the Internet, sparking never-ending debates. But the most prevalent rumor is that Jyn could be Rey's mother. While many point to Jyn and Rey's shared accent as proof of their relation, backing up that theory requires a lot of math and talk about Jyn and Rey's ages during their respective films. So, just how old is Jyn Erso in Rogue One ?

Jyn's age has been kept extremely vague. Based on the casting of Felicity Jones, who herself just turned 33, one could assume Jyn is anywhere from her early 20s to early 30s — Jones could certainly pass for any age in such a range. Of course, with a 10-year age range, it's still tough to pin Jyn down to one specific age without some other clues. According to Wookieepedia, which sites Catalyst: A Rogue One Story as their source, Jyn was born in 21 BBY (Before the Battle of Yavin). Catalyst also describes Jyn's birth as happening some time during the Clone Wars, which took place from 22-19 BBY, so 21 BBY makes sense.

In case you've forgotten, the Battle of Yavin is the big battle at the end of Episode IV when the Death Star is destroyed. And, since Rogue One is about a group of Rebels who steal the plans to the Death Star, it's fair to say that, according to Wookieepedia, Jyn Erso is 21 in Rogue One . If you're thinking that that sounds awfully young to be put in charge of an entire Rebel squad, well, you're probably right. However, let's assume for a moment that Jyn really is 21 during the events of Rogue One.

Assuming Jyn survives the events of Rogue One, her age would make her a prime candidate for Rey's mother. Rey is about 19 in The Force Awakens, which happens over three decades after Rogue One, meaning Jyn could have had Rey sometime in her 30s. The timing works perfectly. Now, if Jyn is Rey's mother, that still leaves us with a lot of questions as to the identity of her father, but I think fans will take what they can get.

If Jyn is 21, that certainly ads to her badassery. It's one thing to save the galaxy, it's quite another to do so before your 22nd birthday. Jyn Erso, you're a helluva woman.