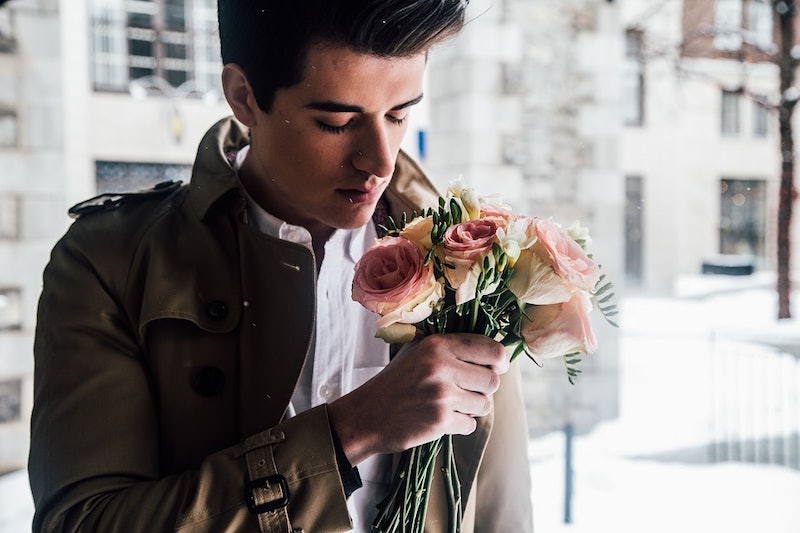 A few months ago, I ended a relationship with a sociopath. I don’t mean that in the in the hyperbolic sense. (“My ex forgot my birthday — he is such a sociopath!”) I mean he actually fulfilled every element of Dr. Hare’s psychopathy checklist, the official psychological tool used to diagnose the disorder. Superficial charm: check. Exaggerated sense of self-esteem: check. Lack of empathy: check. Sexual Promiscuity: CHECK. (For the record, I met several of the other women involved with him at the same time. They’re all beautiful badasses who were equally horrified with our situation. So at least our personal Lord Voldemort had some good taste.)

But what continued to bother me long after I cut off all ties with my sociopath was that it took me so long to see I was dealing an absolute toadstool of a human being. (Real talk: I’m still struggling with the embarrassment of being "had," even though I intellectually know that the emotional abuse was not my fault.) It’s estimated that 4 percent of the population fall under the sociopath banner, so chances are I’ve met a few. It turns out that sociopathy is one of the most difficult mental disorders to spot, particularly when you’ve been conditioned to see the best in people.

Quite simply, a sociopath is someone without a conscience. They can see right and wrong; they just don't care. While a psychopath disengages from societal norms to the point where it's hard to hide their true nature (Ted Bundy, for example), sociopaths tend to view the world as their playground, to manipulate at will in order to get ahead. And because they don’t experience human bonding the same way an average person does, they’re keen observers and imitators — a trait they use to take advantage of others while hiding their true nature.

While I don’t recommend making it a habit to assume the worst about your fellow humans, it was these behaviors that helped me finally realize I was dating a garden-variety socio. Sure, anyone might have questionable manners, tell a white lie, or flake on a date. But if this all sounds a bit too familiar, it might be time to trust your instincts and reevaluate your relationship.

He Moved At Romantic Warp Speed

I come from a family where my siblings and parents were all married less than a year after they met their partners. (And they’re still the picture of marital bliss.) So having amassed hundreds of texts a week after our first kiss wasn’t an immediate tip-off. But sociopaths like to move fast.

"He will choose you, disarm you with his words, and control you with his presence," explains Dr. Robert Hare of the sociopath's magnetic charm. "He will delight you with his wit and his plans. He will show you a good time but you will always get the bill." It’s called “love bombing,” and acts like a serotonin shot to the brain. When he started backing off, or was outright ignoring me, I was left craving another hit of those feel-good chemicals, and he was left in control.

His Previous Girlfriends Were All “Crazy”

Sure, we’ve all made a poor dating decision or two. But if every single ex mentioned is “crazy” in some way or another, it could be a sign that they’re not the problem. What I didn’t realize at the time was that all his detail-heavy tales of women who have done him wrong was a conditioning mechanism. If he was dating me because I was a "cool girl" (unlike all the others), then I had to act the part. No getting jealous if he talks to or looks at other girls. No making demands on him to help figure out big life decisions. No questions when suddenly he didn’t text or call when he agreed to.

"It also introduces a lack of accountability for his actions," Pam Shaffer, LMFT tells Bustle. "Given a sociopath's lack of empathy and manipulative nature, it makes this behavior doubly effective."

He Was Super Charming… Until He Wasn’t

Poisonous snakes have their bright colors, and sociopaths have their charm. After all, why would you voluntarily become their plaything if you weren’t convinced you were getting something out of it? So imagine my shock when I introduced this guy who had captured my heart to my friends... and he went into screensaver mode. The longer it went on, the more dramatic the shift became. I began to believe I was the only person he truly loved, when the truth was that I was the only target in need of his one-man show.

According to M.E. Thomas, author of Confessions of a Sociopath and a diagnosed sociopath himself, this is not uncommon. "I can read every word of your soul, become deeply engrossed in the study of it until I've comprehended every nuance and detail," he writes. "But then when I'm done, I'll discard it as easily as if it were a newspaper, shaking my head at how the ink has stained my fingers gray. My desire to know every layer of you isn't feigned, but interest isn't love, and I make no promises of forever. Perhaps I do every so often, but you have no business believing me."

He Mastered The Art Of The Pity Play

When I started to have my obvious doubts, he began seeking my pity. Suddenly, when I wanted to talk about us, I found myself consoling him about the business he had shuttered a few years ago. About the people who did him wrong. About the shame he felt. (None of which he ever fully explained, because “It’s complicated.”) This is called the pity play, and it’s a major tool in the sociopath’s arsenal. Think about it: If you feel sorry for someone, you’re not judging them, asking questions, or planning to leave. (Pro-tip: Prioritizing your own needs and survival isn’t selfish.)

Martha Stout, author of The Sociopath Next Door, echoes this observation, saying, "If you find yourself often pitying someone who consistently hurts you or other people, and who actively campaigns for your sympathy, the chances are close to 100 percent that you are dealing with a sociopath."

His Need For Stimulation Never Stopped

Boredom is the plague of sociopaths. To counter this, they’re constantly making impulsive decisions and taking risks. At first, this jibed well with my unconventional life and weirdo freelance schedule. Who wouldn't want someone game for a weekend trip to Amsterdam or a round of day drinking? It wasn’t until he began pressuring me to get an impulse tattoo, tearing around mountain roads in his luxury car, or attempting to push my sexual limits that I realized he wasn’t just another free spirit.

It's an action common among sociopaths, due to their inability to form emotional bonds, Stout explains. “And so without our primordial attachments to others, what would we be?" she writes. "Evidently, we would be the players of a game, one that resembled a giant chess match, with our fellow human beings as the rooks, the knights, and the pawns. For this is the essence of sociopathic behavior, and desire."

What better way to stir up drama than jealousy? To achieve that, sociopaths often use triangulation, in which another person or thing is introduced into the relationship. If it wasn’t an “old friend” he just reconnected with who wanted to come to the movies with us, it was the attractive bartender, or even his phone, which he’d gaze at like a long-lost lover. Anything to remind me that if I wanted his attention, I’d have to work for it. The best part? It was all so subtle that if I complained about it, suddenly I was the crazy one.

Another word for this is gaslighting, and it's an incredibly insidious practice. "The Gaslight Effect happens over time, gradually, and often, by the time you are deep into the Gaslight Tango, you are not the same strong self you used to be," writes Robin Stern, Ph.D. "In fact, your ego function has been compromised, and no longer being certain of your reality, you are not often able to accurately identify when something is 'off' with your partner."

He Was Always Either The Hero Or The Victim

My sociopath was a storyteller, the kind who could capture the attention of an entire room. I remember sitting by while he would recount elaborate tales of our exploits… replacing the “we” with “I.” In these stories, he had one of two roles: the hero who saved the day or the victim who was unfairly crushed by “the man.” It reflected his worldview. In his eyes, he was both too smart to play by the rules of society and unfairly penalized for this knowledge. So why not take everything he could by whatever means necessary? Anyone who tried to talk him out of his inflated sense of self-worth was the natural enemy. Once again, this jibed with what I learned from the experts.

"The sense of entitlement that comes with sociopathy is astonishing to those who abide by the social laws and conventions of our culture," writes Seth Myers (no, not that one) in his Psychology Today article "Understanding the Sociopath." "It stems from an underlying sense of rage. Sociopaths feel deeply angry and resentful underneath their often-charming exterior, and this rage fuels their sense that they have the right to act out in whichever way they happen to choose at the time. Everything is up for grabs with sociopaths and nothing is off limits."

The Stupid Lies Started Piling Up

Surprised that he was lying about the little things too? Yeah, me neither… now. But at the time, finding out his favorite band wasn’t his favorite band, his staunch position on luxury baked goods shifted on a daily basis, or that he was actually a morning person felt like a hurricane of confusion. Who the hell is this person? But hey, if your aim is to toy with people, why not lie about everything?

His Favorite Position Was Defense

You can imagine what happened when I confronted him about all of this. I was the crazy one. He had misspoken, I had misheard, or it had never happened. No explanation was too crazy. I was an Eskimo, and he was determined to sell me ice.

Attempting to one-up a sociopath is a losing proposition. They’ll argue or debate with the passion of someone who believes they can do no wrong, because that’s the reality they live in. At some point, you realize you can’t win. There is no cure. The only way to truly beat a sociopath is to cut off all contact and remove them from your life. As Stout notes, this will hurt you more than it will hurt them.

“If all you had ever felt toward another person were the cold wish to 'win,' how would you understand the meaning of love, of friendship, of caring?" she asks. "You would not understand. You would simply go on dominating, and denying, and feeling superior. Perhaps you would experience a little emptiness sometimes, a remote sense of dissatisfaction, but that is all."

I speak from personal experience: If you’re in so deep that it takes you weeks/months/years to realize the game you've been playing, leaving will be painful. But no matter what you’ve been led to believe during your time with your socio, know this: You deserve so much more. And by leaving, you've already taken the first step.