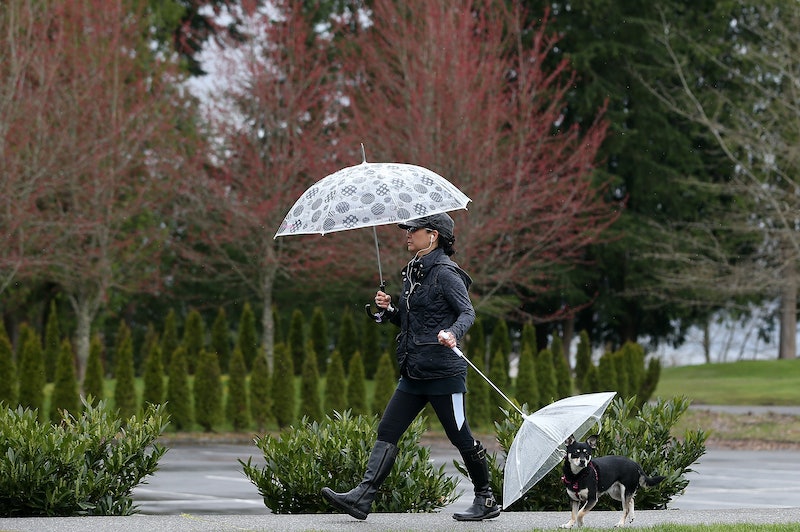 Rain isn’t normally a weather forecast to get excited about, but after a winter of record-setting low temperatures and snowfall, we’ll take any sign that spring is on its way. April Showers may bring May Flowers, but some parts of the country get more soaked than others. And if you're from a place that can handle a little rain, you know you ain't complaining about it.

Rain will be most abundant in these 10 cities, which are statistically some of the rainiest in the United States. From Portland to Pensacola, we look at how much rain the rainiest cities in the country get, and how residents and visitors deal with the damp. Here our our picks for the most waterproof towns in America.

According to Weather.com, Portland receives an average of 43 inches of rainfall every year, although recent weather shifts may bump that number up even higher:The city was doused with 50 inches in the year 2012 alone. With an average of 154 rainy days each year, Portland has a well-deserved rep for being wet.

You'll see plenty of people on their bikes when it rains in this town, and probably in some pretty stylish gore-tex, to boot. In addition to hosting an entire website about what to do when it rains, Portland is known for its coffee and craft beer, so you'll never be at a loss for ways to socialize indoors.

According to Today I Found Out, Seattle only receives an average of 38 inches of rain annually, placing it at number 44 on the list of the wettest U.S. cities by rainfall. So why does this Pacific Northwest metropolis have such a reputation for being rainy? It may have something to do with the sheer frequency of rainy days: according to seattle.gov, the city experiences, on average, a whopping 154 days of precipitation every year. (It may also be a rumor natives like to spread to keep too many people from crowding the gorgeous city.)

A leader in both coffee production and tech, even more rain-proof fun can be had at the Seattle Art Museum, the Museum of History and Industry (or MOHAI), and the weird-looking but view-affording Space Needle.

On the chance that it’s raining when you visit Florida’s state capital (and that chance is good), your options still range from the educational to the purely entertaining. The Museum of Florida History gives visitors a glimpse of the history of one of the U.S.’s earliest-settled and — let’s be honest — kookiest states. Alternatively, the city’s famous Movies 8 theater offers what have to be some of the cheapest movie tickets in the country. Two dollars on Tuesdays, and three dollars for any other day? We're in.

Located 90 miles east of Houston on the coast of Sabine Lake, Port Arthur gets hit with the same Gulf Coast precipitation that drenches the coast of Louisiana and Florida. Reprieves from the rain include the Museum of the Gulf Coast and the Chua Buu Mon Buddhist Temple.

We don’t often think of Miami as a wet city, but its heavy annual rainfall may help to explain its recent explosion as a center for non-beach culture and entertainment. The city has hosted Art Basel since 2002, and has some of the chicest museums and galleries in the country. The gorgeous Pérez Art Museum Miami, or PAMM (some also call it MAM — we can’t keep up) is a good place to start. After that, move on to the Museum of Contemporary Art, North Miami.

Louisiana’s capital city gets almost as much rain as New Orleans. On the 56 days out of the year when it’s wet, visitors can check out the Green Frog Music Listening Room, a non-profit music center where you can listen to a wide range of live performers. The city’s two main casinos, L’Auberge and Belle of Baton Rouge, also offer indoor fun (provided luck’s on your side).

A beach-lined favorite among winter birds and retirees, West Palm Beach gets doused with a tan-unfriendly 63 inches of rain every year. But the city’s many arts venues, such as the architecturally stunning Kravis Center, and shopping centers like CityPlace, help to offset the wet. Either way, it's a beautiful place for a rainy day.

Rain is about as common in New Orleans as its renown jazz music and French Colonial architecture. This year’s Mardi Gras (the city’s annual debauchery-filled claim to fame) was one of the wettest and coldest in recent memory. Thankfully, much of the city’s culture actually takes place indoors. In addition to its countless live jazz venues, New Orleans offers a rich assortment of museums. The Ogden Museum of Art is a must for anyone interested in Southern history, and for those who favor local watering holes, mixology hotspots like French 75 and Cure are great places to start.

This panhandle city is known mainly for its beaches, but on any of the 50-plus rainy days the city experiences each year, a host of indoor attractions beckon. The National Naval Aviation Museum is one of the largest in the world devoted to the history military planes and flight, and the T.T. Wentworth Museum gives a glimpse of Florida’s perhaps underappreciated colonial history. Or, just chow down at the Atlas Oyster House while you wait for the sun to come back out.

Didn't know that Mobile gets this much rain? Maybe it's because they aren't whining about it. Every year, Alabama’s third-most populous city gets pelted with more than five feet of rainfall. With an average of 59 rainy days per year, residents can count on close to two months of wet weather altogether.

Residents and visitors can find much to do when the weather isn’t cooperating: Mobile’s museums and educational centers, such as the National African American Archives and Museum and the Mobile Museum of Art, offer fascinating insights into African American history. During the Mardi Gras and/or Carnival season, which spans from November to spring, celebrators can seek out masquerade balls or events put on by the city’s mystic societies.

All weather data courtesy of Weatherbill, except where otherwise noted.