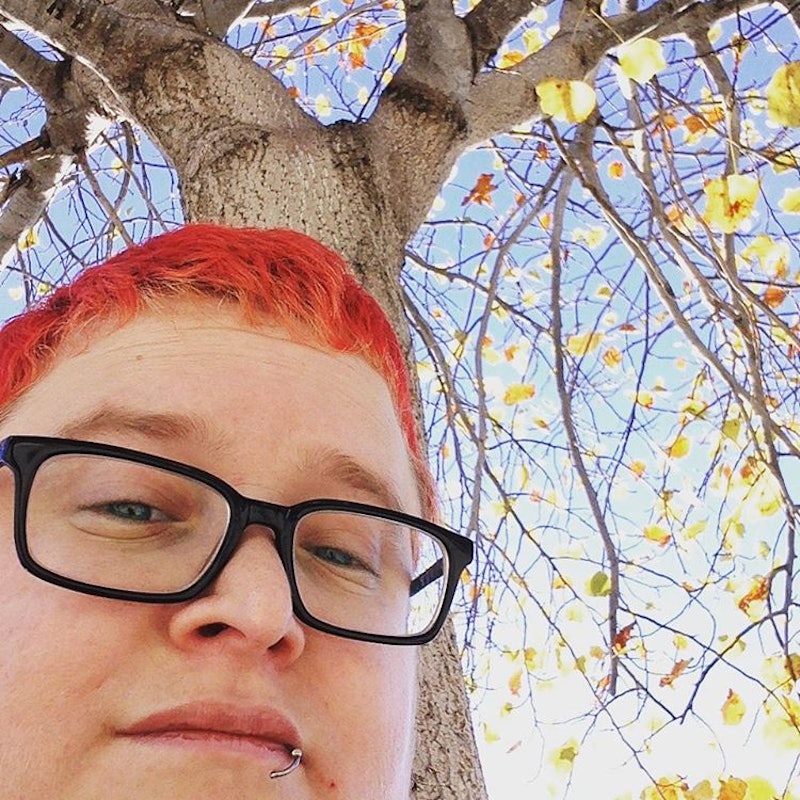 Before I leave the house, I have to brush each of the knobs on the stove. Is it off? Does the stove smell like gas? Maybe I should double back and check. Is the thermostat off, my clanking, grumbling heater still? Are all the lights turned off? I circle the house in a complicated ritual, starting all over again if I'm interrupted. When I lock the door, I have to yank the handle twice, then peer through the kitchen window to make sure the stove is off. I squint. Is that a hint of blue flame I see? I have to check the door again, lean my hand against the window. Yes, locked, definitely closed.

It's become so swift and second nature that it's reflexive. You get good at hiding these things after years of practice — when I leave the house with people, I am performing whatever conversation we are having while letting my hands and eyes dance across the light switches, the stove, the walls. I check the door discreetly, make my glance through the window look casual.

It's better than it used to be, I tell my psychiatrist. I don't have to unplug all my lamps before I go.

People think of it as an obsession with order — and it certainly can be — but it's actually something much, much darker.

I can't tell you precisely when I became so terrified of fire. It might have been when a friend of ours lost his barn to arson and we spent several cold, grim nights at his ranch keeping watch while waiting for him to return. But I think it started long before that, and it's an ever-present fear. When I travel, I wake up in the middle of the night, panicked, worrying that my house has burned down and no one has called me. Sometimes I am forced to call — from Japan, from New York, from Seattle, to ask my catsitters if I left the stove on, if they could just check. When wildfires tease at the horizon, I pad through the house, thinking about what I will take if the evacuation order comes.

When the engine catches fire on a flight from New York to San Francisco and the flames gust past my window, I enter a strange sort of detachment. I am, oddly, unafraid, but struck more with a sense of inevitability.

For a long time, I thought this was normal. What rational person wouldn't be worried about fire? There's something dark and primal and unstoppable about it, that even after all these years of taming fire, it can still swallow up a house in a night, race through a nightclub, fill an Oakland warehouse with smoke. When I read about horrific fires in the news, it only solidifies my existential terror. For every new structure I enter, a search — where are the exits? If a fire starts in the kitchen, which way will you get out?

It wasn't until college, and the first fire drill that left us shivering in pajamas in the snow, that I learned this was not normal, and was actually kind of weird.

"You're so OCD," someone said.

Obsessive Compulsive Disorder is such a part of the cultural landscape that it's become a meme. People think of it as an obsession with order — and it certainly can be — but it's actually something much, much darker. Our obsessions may look superficially like order because often, we are trying to control our environment. Even as a part of us recognizes that the environment cannot be controlled, it just makes us try harder.

For all that OCD is a highly visible mental illness, it's also incredibly poorly understood, symptoms reduced to weird quirks or behavior that people could control, but choose not to. Sometimes it's even treated as a positive trait — "I'm super OCD," someone says, meaning that she is well-organized. She has clearly never been into the disordered chaos of the brain of someone who is actually mentally ill, or seen the homes of some people with OCD.

It is obsessions: Thoughts that fill our minds, consuming them. It's not that we return to those thoughts frequently or that they come up a lot, but that they become all that we can think about. Maybe it's a fear of fire. Maybe it's a persistent loop of suicidal ideation, our minds telling us that we are worthless garbage and suggesting various ways to kill ourselves. Maybe it's a fear of death. Obsessions are myriad and complicated and while they may start with something rational — don't leave the candle burning when you go to bed, my father probably once said — they bloom into something monstrous.

And they're followed by our compulsions, our rituals. The things we have to do to stave off that which we most fear. Everyone has something different. Maybe it's counting, or knocking in a precise sequence, checking the stove precisely three times before we leave the house. Sometimes it's self-harm. For some of us, an interruption means starting from the beginning. Popping out the door to check the mail balloons into a half-hour ordeal. A change in environment or circumstances leaves us marooned and flailing for a hold on things. These obsessions aren't harmless or charming or eclectic, but are more like chains binding us to an existence we didn't choose.

"Just get over it," people say, not understanding that I would like nothing more than to be able to get over it.

I've spent years in therapy, but my deep-seated fear of fire doesn't get any better. Sometimes, it feels like it is getting worse. I try endless variations of therapeutic modalities. I try an assortment of medications to control my other mental health conditions, some of which seem to mitigate the OCD — a few years ago, I bought warming pads for the cats, and I was able to leave them plugged in when I left the house, though the first few months left me quivering with abject terror when I did.

"Just get over it," people say, not understanding that I would like nothing more than to be able to get over it. I would love to be able to walk out the door without checking and double-checking, without following a sequence of moves so engrained that I can and do manage it in the dark. I would love to be able to enter a building without immediately seeking out the fire exits. I would love it if I didn't flinch when people joked about fire, sending a hot gust of panic up my spine, prickling the hair on my neck. If I could sit around a campfire with people without anxiously checking and rechecking my pants — is that a spark?

For some of us, OCD is disabling — for a particularly bad period, I couldn't even leave my house, fixated on the idea that my leaving it unattended would cause it to catch fire. When people make light of OCD, turn it into something cute or funny, I want to ask them if they've ever been so obsessed with thoughts of suicide that every minute is a calculus of determining how to use the objects around you to kill yourself. If they're ever been so consumed with terror about something that it has controlled everything about them — how they move, where they go, the kinds of jobs they apply for, their very friendships. I want to ask them if they've ever been convinced that they are the only ones standing between this and the end of the world, and that the only way to save humanity is through repeating the same complicated, comforting ritual, over and over again, into infinity.

More like this
The Viral 'Little Miss' Franchise Is Focusing On Mental Health Next
By Darshita Goyal
What Is The Forest Personality Test? The TikTok Trend, Explained
By Georgina Lawton
Even The Royal Family Can’t Get Over Alessia Russo’s Backheel Goal For England
By Maxine Harrison
Why A Relationship Timeline Isn't Necessary For Everyone
By Lexi Inks
Get Even More From Bustle — Sign Up For The Newsletter