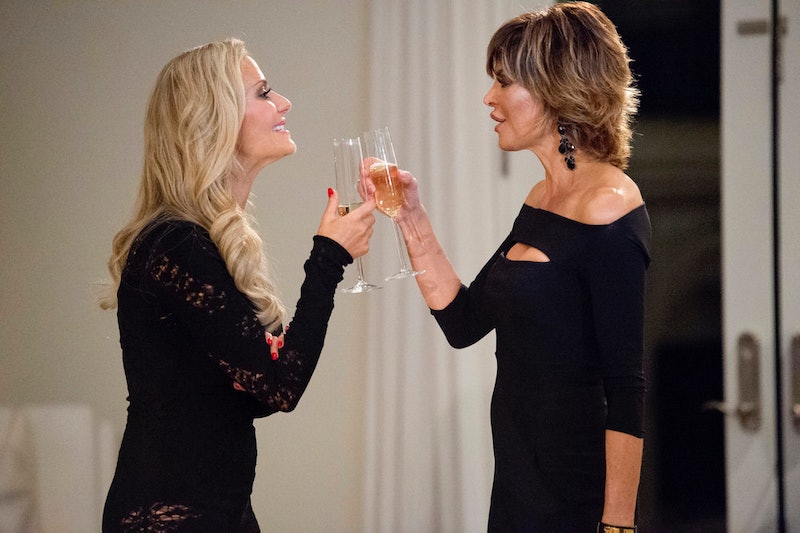 You didn't think we would get out of an episode of The Real Housewives of Beverly Hills without some drama from Lisa Rinna, Eileen Davidson, and Lisa Vanderpump, did you? Of course you didn't because you know what this show is all about. Dorit Kemsley proved her place as a Real Housewife on Tuesday with a lavish 40th birthday party that brought all of the ladies into one small area, which always ends really well. The drama definitely flowed, but it actually ended up being a positive night for Lisa-squared when Rinna apologized to Vanderpump.

I have to be honest, I was getting a little bit nervous that the whole LVP and Rinna fight would just be the same old thing for a whole other season. After all, it seemed like we've heard the same "manipulative" and "own it" fight about 400 times before. Luckily, I have been pleasantly surprised, because I have to admit that it is actually kind of entertaining to see Vanderpump "take the piss" out of Rinna (her words, not mine) any time they are face-to-face now. It is way more fun to see LVP take subtle jabs than it was to watch them just whine about each other to the rest of the cast.

The Tuesday drama began when LVP flat-out refused to tell Rinna where she got her diamond-encrusted gloves (the horror!) and continued when LVP told Dorit that it probably wasn't a good thing that she lived anywhere near Rinna. Ouch. After a few more good moments of LVP landing (figurative) knockout punches, Rinna actually took a step forward and apologized. LVP asked her if they could just move on, and I waited for a moment to see if the universe would collapse into itself. It didn't, so I guess this is real and we might see the these two be civil.

Eileen didn't get the same happy ending, unfortunately. It actually looked like LVP was going to apologize to her for whatever they are fighting about currently but she ended up just giving her condolences about the death of Eileen's mother. Eileen responded to it kind of rudely and told her that she thought she was apologizing for their fight in the Hamptons last season. Of course, that response rubbed LVP the wrong way and set them up for a hostile rest of the night. It really hit the fan when Eileen asked where her husband was and LVP used that "British humor" by responding that she saw him in the corner "with his head up someone's skirt." Eileen didn't exactly love that joke and now it looks like they will be the new feud to watch.

I suppose we might be seeing more Eileen and LVP fights this season as opposed to Lisa-squared fights. I think Eileen needs to relax a little bit and realize that LVP has a sense of humor that you need to just go along with. Hopefully these two can come to some kind of common ground.