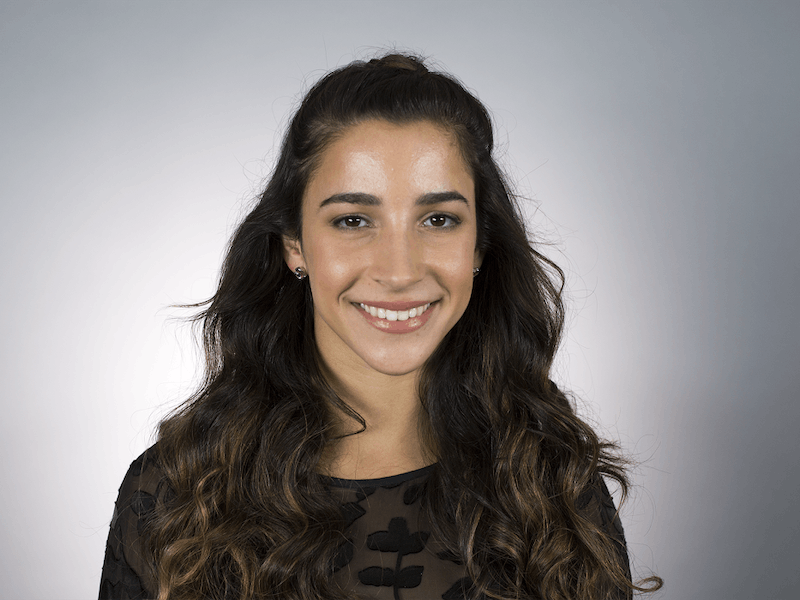 When celebrities come into Bustle HQ in New York, whether it's for a photoshoot, videoshoot, or a Facebook Live, we want to give them the chance to leave their mark. Literally. So we hand them a pen, a piece of paper, a few questions, and ask them to get creative. The rest is up to them. This time, two-time Olympic gymnast and gold medal winner Aly Raisman is leaving her mark in the Bustle Booth.

Fans first fell in love with 22-year-old Raisman at the 2012 Olympics in London, when she burst onto the scene as both the captain, and a member, of the U.S. Women's Gymnastics team, appropriately dubbed the "Fierce Five." Alongside fellow powerhouses Gabby Douglas, McKayla Maroney, Kyla Ross, and Jordyn Wieber, Raisman swept to victory, winning the United States its second team gold medal. She also nabbed some hardware of her very own, with a gold in the floor competition and a bronze on the balance beam. In fact, with three medals, Raisman was the most-decorated American gymnast at the London Games.

Not satisfied with being, y'know, literally the best of the best, she was back four years later, once again captaining Team U.S.A. at the 2016 Olympics in Rio de Janeiro. And, once again she led them to victory in the team competition. (She also gave us a full-on obsession with her parents in the process.) But Raisman wasn't done yet. Just to fully round out her collection of Olympic medals, she picked up two silver medals as well, in floor exercises and individual all-around. That brought her total to six and made pretty much everyone else on the planet look like a total underachiever.

Since the Games, she's hopefully taking some time to be a regular human being again for a while instead of a superhero. But she still had time to stop by Bustle's video studio to talk about her latest project with Piercing Pagoda, and to share some of the things that make her Aly Raisman, from her favorite pump-up song to her go-to emoji. It doesn't seem fair that one person can be a world-class athlete and this relatable, but this is Aly Raisman we're talking about. You should be used to her doing the impossible by now.