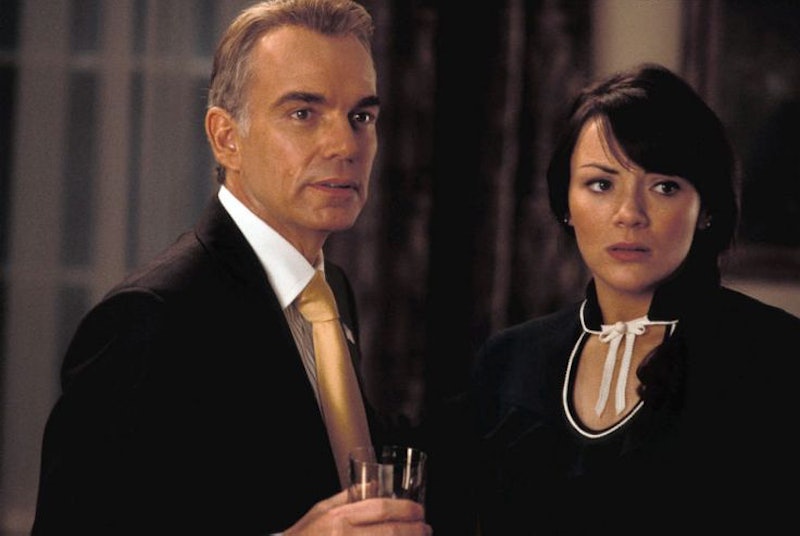 Ever since its release back in 2003, Love Actually has remained a classic Christmas movie, full of romance, heartbreak, humor and the sort of feel good ending that makes you smile inside. It's a movie that's quickly become an essential part of the holiday season and, as a result, it's likely that you may have seen Love Actually numerous times and noticed something new with every viewing. But, having indulged in what feels like the thousandth time I've seen the film at a friends house recently, I definitely noticed something that I hadn't necessarily thought about before, and it deeply unnerved me. Love Actually has a consent problem, and it's something that desperately needs addressing. (Bustle reached out to screenwriter Richard Curtis for comment, but did not receive a response by the time of publication.)

The issue in question occurs within the romantic arc between Prime Minister David (Hugh Grant) and his junior staffer, Natalie (Martine McCutcheon), with whom he's irrevocably in love. When the U.S. President (Billy Bob Thornton) pays a visit, he happens to take a liking to Natalie, who appears to be flattered by his attention. Later on in the scene, however, David catches the President making physical advances toward Natalie and is clearly upset about it. Natalie, who hardly looks comfortable with the moment, is also upset, and leaves the room.

Though Natalie never once discusses exactly what happened in that brief moment between herself and the President, her facial expression and body language seem to signify that this isn't something she's consented to. She looks frozen, uncomfortable with and upset by his advances. But what's more concerning is that David doesn't even discuss it. In fact, rather than chase after her to check if she's OK and discuss what may happened (or get a female member of staff to do so instead), he makes what happened to her all about him and his career, instead.

Directly following this scene, David makes an impassioned speech at a press conference discussing the "special relationship" between Britain and America. Though the President is happy to maintain a united, friendly front, David instead refers to America as being a "bully" and describes their relationship as being based on "the President taking exactly what he wants and casually ignoring all those things that really matter to Britain."

David might be speaking about politics here, but it's clear to the audience that what he's really talking about is how the President wanted to have Natalie for himself. Interestingly, the language that he uses to address these feelings actually do reflect the idea that the President may have been forcing himself on Natalie. It seems as though David has picked up on the unfair power dynamics between Natalie and the President, and how that could easily factor into the President thinking he's entitled to sexually assault a lower ranking worker. But when David calls him a bully who thinks he can take exactly what he wants regardless of anyone else's feelings, the feelings he appears to be talking about are his own rather than Natalie's.

And how does Natalie feel? Well, we don't really know. From here, the dialogue of consent becomes even more muted within the narrative. Not only is the suggestion that Natalie may have experienced some form of sexual harassment or assault by the President ignored beyond the implications of that speech, but Natalie is actually punished for the incident. Unwilling to talk to her regarding the event, David instead requests that she be "redistributed" from his office — or, fired, as those of us with some guts could muster up the confidence to say.

Later on, David then reads through a Christmas card from Natalie in which she even apologizes for "that thing that happened," calling it a "very odd moment" that she feels like a "prize idiot" for being a part of. The note presents Natalie as accepting responsibility for what happened, when, in reality (and especially if the boundaries of consent were indeed crossed), she has absolutely nothing to feel accountable for.

By framing Natalie's storyline in this particular way, the storyline blurs lines of consensual and nonconsensual advances and blames the victim while giving them no agency in the narrative. This note is the only point at which we hear Nancy's side, or even get a glimpse into her feelings, and it's a note in which she apologizes for being a part of whatever may have happened between herself and the President that had her looking so uncomfortable during it. Was it consensual? Was it nonconsensual? Those questions seem more important than David's hurt feelings, but the script doesn't touch upon them.

In skirting around the subject, the storyline fails to deliver in the message that there really isn't anything complicated about asking for permission, or the words yes and no, just as there isn't anything difficult about simply checking that someone you care about has consented to an experience before you judge them for it. It's all the more concerning that what may have potentially happened to Natalie happened in her place of employment, and at the expense of her job.

But instead of opting to make a statement about that, the narrative turns it into a romantic opportunity: David sweeps in to save Natalie at the end of their arc. You know what would have been more romantic, though? Simply supporting Natalie from the start, ensuring her safety, believing her statements, and taking action on them.