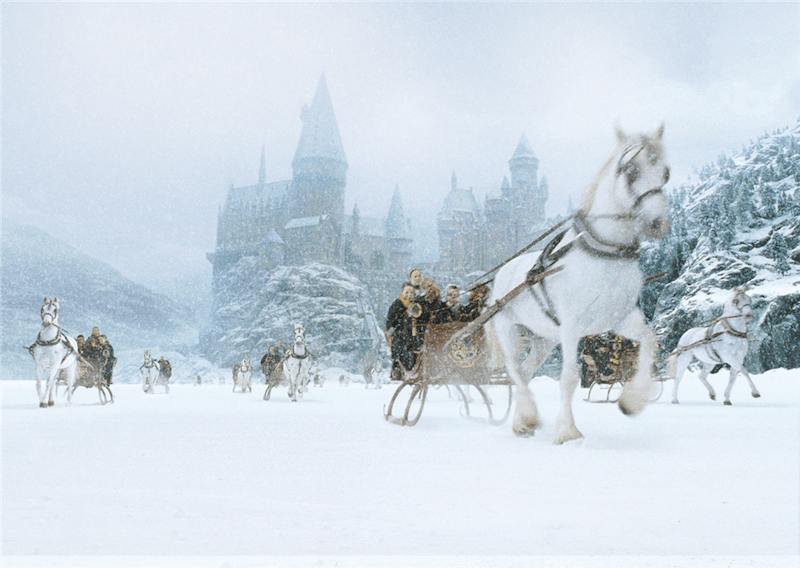 OK, so we all know that Hogwarts is magical AF. It's so magical that the stairs can't even stay in one dang spot. But Hogwarts during the holidays? Damn. The whole get up makes your family's holiday traditions look like garbage. Like, I think re-reading HP over the holidays gives me more warm and fuzzy feelings of goodwill towards men than hanging out with my own non-magic family. Harry Potter just straight up ruined all of us, because it cranked our holiday expectations through the freaking roof. So here are a few Harry Potter holiday moments that completely ruined our childhoods by being magical AF.

I mean, sure, the HP holidays were by no means perfect. Like, the Jewish kids at Hogwarts must have felt awkward as hell (for an extended World War II ethnic cleansing allegory, Harry Potter has a shocking lack of Jewish kids?). Where were the singing menorahs, J.K.? And the Dursleys were always trolling Harry by sending him tissue or something. And all of those sumptuous holiday meals were created by enslaved elves.

But! We didn't care about any of that at the time! Because, even when it wasn't perfect, Harry Potter's holiday nonsense was so damn magical and we loved every second of it:

1. When Dumbledore was irresponsible AF

Oh, Dumbledore. So lovably irresponsible. Harry's first Christmas at Hogwarts is magical enough already, what with precious baby Harry getting presents for the first time, but then he gets an invisibility cloak. Should an 11-year-old child be allowed to run around with the power of invisibility? Absolutely not. Was it the coolest thing ever when we first read it? Yes.

2. When the Great Hall was decked out AF

I'm pretty sure Dumbledore is blowing the entire Hogwarts budget on the Great Hall Christmas decor. A dozen frost-covered Christmas trees? Holly and mistletoe streamers across the whole ceiling? Magical snow falling from the sky? Damn, Dumbledore. Couldn't you spend that money on like... hiring a math teacher or something?

3. When the rest of the castle was also decked out AF

J.K. Rowling always made British winter sound so cheerful and cozy and not at all depressing. The castle grounds are "covered in glittering frost." The suits of armor sing Christmas carols. Flitwick decorates his classroom with "shimmering lights that turned out to be real, fluttering fairies." How is your family's string of garbage electric lights ever going to top actual living fairies??

4. When Sirius was irresponsible AF

Remember that time that Harry's stalker/godfather got him a magic flying deathstick for Christmas? Yeah, that was some top notch irresponsibility, on par with Dumbledore (if you're a wanted felon, maybe don't send an anonymous package to a school?). But it was also magical as hell when a shiny new broomstick descended from the heavens to replace the one that Harry lost... even though he only lost it because Sirius decided to show up at a Quidditch match like the irresponsible father figure that he is.

5. When Trelawney was creepy AF

Trelawney has no chill. When she comes down to the Great Hall for Christmas, she freaks out because if she sits down there will be thirteen people at the table, which means the first one to rise will die. She doesn't count Peter Pettigrew/Scabbers, though, so there are thirteen people at the table already... and Dumbledore rises to greet her. And then Dumbledore is the first to die. So... what's more magical than correctly predicting the death of a beloved character, right?

6. When Hogsmeade was adorable AF

Hogsmeade "looked like a Christmas card," according to book three, with enchanted candles hung from the trees, and snow on the thatched roofs, and holly wreaths on every door, and all-around adorable holiday cuteness that stopped just short of being sickeningly sweet.

7. When Fred and George were rude AF to Ron

Seriously... why didn't they give the Marauder's Map to Ron? Sure, Harry's dad helped create it, but Fred and George didn't know that. So rude. But pretty dang magical if you're little Harry, and you wanted a Christmas gift that would help you spy on your friends.

8. When Number 12 was actually cheery AF

Sirius actually cleans his own house in time for Christmas! And it only took him six months! Really, though, it's pretty magical to see Number 12 go from a gross, creepy house to a gross, cheery house, with a Christmas tree and friends and family and Santa hats on all the severed elf heads.

9. When the Yule Ball happened and everyone was dramatic AF

Sure, everyone suddenly went through puberty and got all snippy with each other... but the Yule Ball was so magical. The dancing! The dresses! Hermione's hair! Truly, the perfect magic holiday wizard prom.

10. When Dobby was hype AF about Christmas

Dobby loves Harry... maybe a little too much. Like the time that Dobby gave Harry a hand-painted portrait of himself for Christmas. Or the time he snuck into the Room of Requirement and hung up a banner reading "HAVE A VERY HARRY CHRISTMAS!" accompanied by a hundred baubles with Harry's face on them. But hey, it's pretty magical to get that pumped about the holidays! Even if Harry didn't think so!

11. When we all remembered that Harry’s parents are dead AF

Nothing more magical than remembering that you're an orphan, I guess? If you think crying is magical? Harry and Hermione's Christmas at Godric's Hollow isn't the cheeriest of the HP holidays, but it's still a magically touching moment when Hermione conjures up a wreath for James and Lily's grave.

Yeah, yeah, the Great Hall was great and the Yule Ball was enchanting, but Christmas at the Burrow was next level cozy. Ginny's paper chain decor, the gnome stuck on top of the tree... all the holiday moments with Harry's found family were truly magical AF.

More like this
16 Novels That Paint A Realistic Portrait Of Abortion
By K.W. Colyard
Lauren Rae Is Bringing Back The Sex And The City Vibes In Her New Memoir
By Shahed Ezaydi
13 Summer Solstice Quotes To Celebrate The Longest Day Of The Year
By Sadie Trombetta
The 'Hocus Pocus' Sequel Finally Has A Release Date & It Makes Total Sense
By Shannon Barbour and Radhika Menon
Get Even More From Bustle — Sign Up For The Newsletter