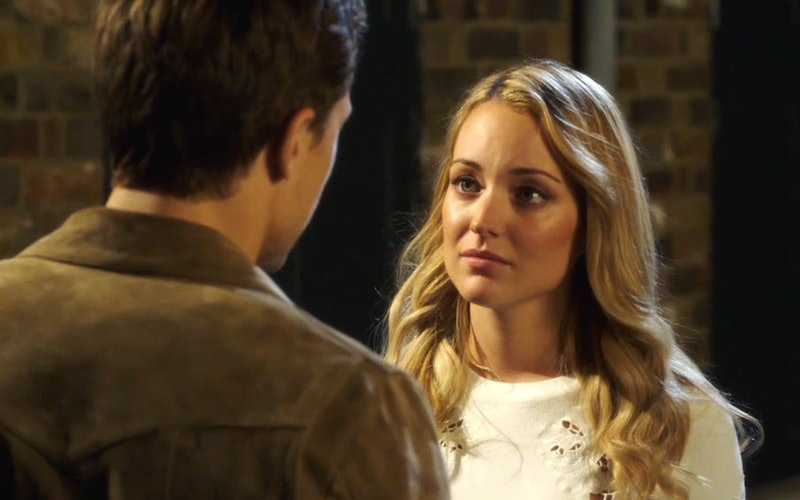 The Royals revealed the identity of the mysterious bartender that Liam was smitten with during the second episode of Season 3 and the series was even more generous with details during Dec. 18's episode, "Aye, There's the Rub." Through flashbacks, viewers saw that Kathryn was Robert's girlfriend on The Royals. Yet, unbeknownst to Robert, Liam was interested in her first. As the final moments of the episode showed Robert returning to the palace, Liam dating his girlfriend is going to cause some issues for these brothers.

This all-important backstory showed how Robert was at Kathryn's father's pub giving a speech when Liam took notice of her. But as Robert was the older brother and always got what he wanted, he ended up dating Kathryn for a year before he left for the training camp that he had supposedly died during. Even though The Royals never hinted at it before, Liam still cared about Kathryn while his brother was dating her, but never spoke up to say he had been into her first. Now, Liam has decided to actively pursue her, even showing up at her dad's pub to speak with veterans, and she appears to genuinely care about him too.

Of course, Liam being happy in his love life — with his brother's girlfriend — is happening now because Robert is actually still alive. So Kathryn is going to have to make a major decision: Does she choose to stay with Liam or go back to Robert out of a sense of duty? Robert had kept their relationship private, something that clearly bothered her, while Liam looks like he's willing to put himself out there for her. Robert was surprisingly stuffy in the flashbacks (how the hell did he come from the same family as Eleanor??) and Kathryn might prefer Liam because of that. However, there's not really a protocol to follow for when your secret prince boyfriend returns from the dead.

Although Liam seems empowered to take what he wants, he might change his tune when he finds out Robert is alive. While I am sure he will be happy that his brother isn't dead, Robert's appearance is going to complicate matters — especially since Liam thinks he is going to become the king of England. Not only does Robert returning mean that Liam might lose his new girlfriend, it means he could lose the crown. Yes, there's the chance that Robert could abdicate the throne and Liam becomes king, but still, Robert returning to the palace is most definitely going to cause some problems — not just for Kathryn and Liam's relationship, but for the future of England too.

More like this
How Is The British Royal Family Related To The Romanovs?
By Karen Fratti
Robert Brotherton's Boyfriend Ra'ed Saade Competed On Several Reality Shows
By Brad Witter
These Are The Murder Suspects You Didn't See In 'The Texas Killing Fields' Doc
By Grace Wehniainen
Fans Have Discovered The 'I'm A Celebrity' Camp's *Exact* Location
By Emma Madden
Get Even More From Bustle — Sign Up For The Newsletter