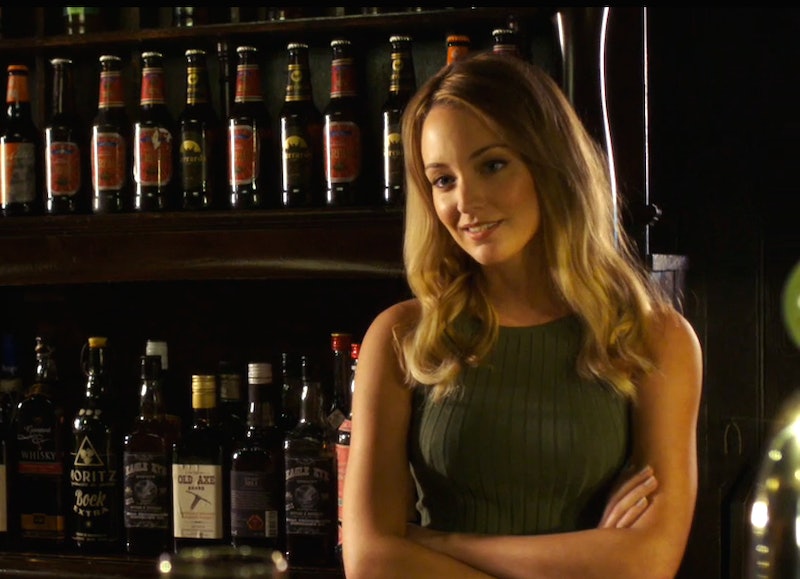 If you were wondering who the bartender that Prince Liam visited after his little Fight Clubesque stint in the Season 3 premiere of The Royals, you got your answer in the final moments of the Dec. 11 episode. Turns out, Liam has fallen for Kathryn — a woman who was most likely Robert's girlfriend on The Royals . As both Liam and Kathryn think that Robert is dead, them sleeping together is not necessarily wrong. However, since fans know that Robert is actually alive on an abandoned island — pining for Kathryn — Liam and Kathryn's budding relationship is going to lead to plenty of drama. And isn't it twists like these that make watching The Royals so stressful and fun?

When the unnamed blonde woman was introduced in the season premiere, the world of Twitter was understandably confused about whether viewers had seen her before or not. (Along with thinking that she eerily looks like Liam's previous girlfriend Ophelia since she totally does.) Being patient paid off though since not only did fans find out that no, we had not seen her before, but also that the reason for the secrecy behind her character was for a really good reason because Liam wasn't conflicted about seeing Kathryn because he is a royal — it's because she dated his dead brother.

After a love pep talk from his sister Eleanor, who is finally happy with Jasper, during their fun party day out, Liam decided to go for it with Kathryn. Simultaneously, on a deserted island, Robert had been dreading returning to the palace, envisioning the press bombarding him. Yet, he saw and heard a vision of a woman in a white dress asking him, "What do you want?" as he carved a triangle in some driftwood. Later, it was shown that the triangle was a tattoo on the woman's back. The woman was — but, of course — Kathryn, a realization given to the audience when Liam was in bed with her.

Upon seeing this vision of Kathryn for a second time, Robert saw a ship in the water and rather than hide from it like he did in the Season 3 premiere, he set off his flare frantically. Because while the thought of his sister wasn't enough to make him want to come back to his royal duties, the thought of Kathryn was. What Robert wants is her — and now, she's currently sleeping with Liam. I can forgive The Royals for giving fans this plot out of nowhere because this is going to lead to some scandalous stuff.

So yeah, things will be even more complicated than originally anticipated when Robert returns. Not only is Queen Helena trying to prove that Liam should be king, but Liam is also with Robert's girl. Yet, before you condemn Liam, beyond the fact that he thinks Robert is dead, he also mentioned how he should have spoken up when he first met Kathryn. Does that mean he met Kathryn before Robert and his big brother stole her from him? Well, one revelation at a time and since The Royals just gave us a big one, fans will have to wait and see until the next episode. One thing seems for certain now though — that Robert will be back at the palace sooner than expected.