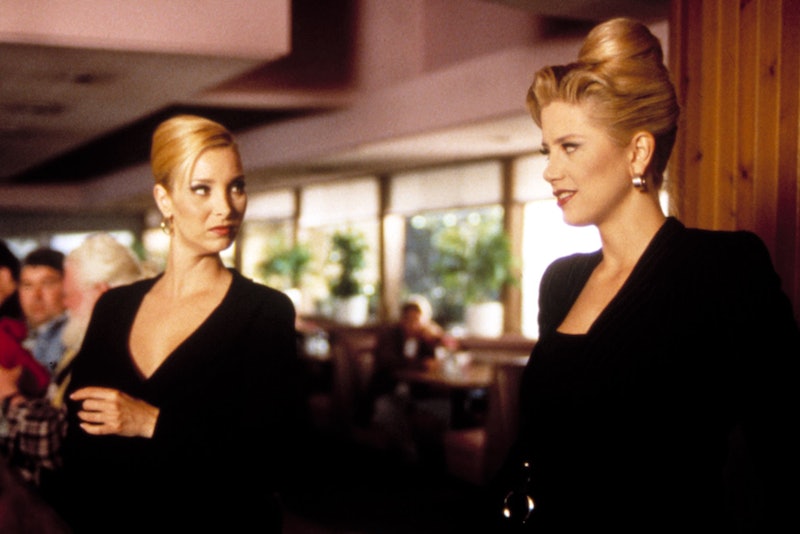 When you were growing up, there were a lot of covert operations going on, and there were certain secrets you and your BFF kept in the '90s. BFFs are designed for secret sharing and keeping, of course. There are timeless secrets we keep with our besties: those late night burritos (yes, the ones AFTER the huge dinner you already had), the crushes you've had, your dreams, fears and everything in between. Growing up in the '90s, you shared all this, and so, so much more with your bestie. Yes, in the '90s, you even had '90s themed secrets. Most of them were to hide the cringeworthy things you and your BFF got up to when no one was looking.

Of course, being young and curious, you were always sticking your nose in places it didn't belong — like the "adult" section of the VHS store. Having your bestie along for the ride not only gave you courage, but bonded the two of you over shared shenanigans and the tome of secrets you built up through your adventures. Some of those secrets you still keep today, probably. That's OK, we've all got some of the same ones too! Here are 11 secrets you and your BFF kept in the '90s.

1. That Time You Snuck Into The Adults Only Section At The Local Video Store

You'd plot and plan your assault on the adult's only section of the VHS store. Loitering after school, you'd try and be as casual as possible as you sauntered up to look at the nudies and try and figure out exactly what adulthood was all about. And the pair of you never told a soul!

Yes, you had some little perverted secrets. Your Barbies would have all kinds of fun when you and your BFF weren't being watched.

3. The Time You Conspired To Push The Glass During A Seance With Your Other Friends

Seriously though, all your other friends still think you guys actually spoke to a ghost. Only you and your bestie know that you two were pushing the cup around. It was very hard to hold back your laughter.

4. The Location Of Your Buried Time Capsule

You kept it such a good secret, you both eventually forgot where it was buried. You're calling your bestie now, aren't you? Clear the weekend schedule: you're going to find that damn time capsule.

5. That You Both Really Didn't Get The Whole Nirvana Thing, Even Though You Both Pretended To

While everyone was moshing along to Nirvana, you and your bestie joined in. But in your secret conversations, you both divulged to one another how much you just did not get it. It's a secret you'll both carry with you your entire lives, as you both continue to pretend that you loved the iconic grunge band in the '90s.

6. All The Times You Teamed Up To Three Way Call Someone Without Their Knowledge

You made other friends say mean stuff about your friend on three way calls where your friend was secretly listening and vice versa. With secret three way chats, you and your bestie blazed a trail though the two-faced people in your lives.

7. That You Were Actually The Ones Making All Those Prank Calls To Your "Enemies"

And once you knew who was talking smack about you behind your back, you and your bestie would put in the prank calls where you'd ring up and ask for "Seymour Butts" and the like.

8. All The Times You Knowingly And Deliberately Didn't Rewind The VHS Tapes You Borrowed For Your Slumber Party Before Returning Them

*Evil laugh*. You and your bestie colluded to not rewind your VHS tapes, and smirkingly returned them in that sorry state. For shame!

9. That You Didn't Get The "Blue Blazer Black/Back" Joke In Friends

There were a lot of joke and references in Friends that you didn't get — and that was OK, because you were probably a kid, and the jokes were intended for adults. But you quoted them anyway, and laughed at them, even though you had no idea what was going on. The only person who knew the truth was your BFF, and that's because they were doing the exact same thing.

10. That You Were Both There Talking To Your Crushes On AIM Under Fake Names, Giggling The Whole Time

You were such a diabolical pair! Sitting in front of the computer together after school, nearly choking on chips because you were giggling so much, you'd make up fake names and try to chat each other's crushes.

Yes, in the '90s your sexual awakening had a lot to do with cartoons that gave you feelings. Luckily you had a best friend to divulge to, who also had their weird cartoon crushes too.