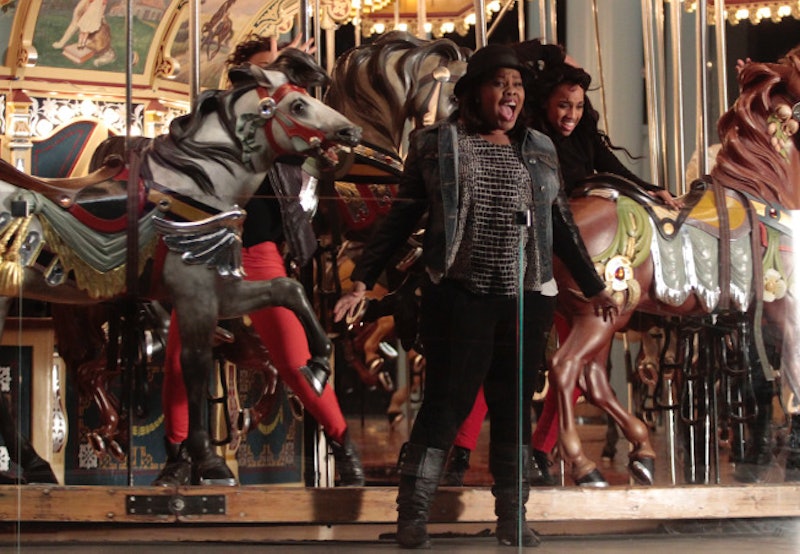 Now here's something Glee's never done before. The FOX series took a dark turn on Tuesday night's episode "Bash", where it took on homophobic hate crimes and racism. And it's starting to become evident that we're truly looking at a different show — where the hallowed halls of McKinley High School are just a distant memory. Like Mercedes said, all we have is the real world now and the real world isn't such a great place.

We're used to Glee dealing with the difficult issues head-on — it's a series trademark, after all, but we're not used to seeing it quite like this. Tuesday night's episode put Mercedes, Rachel, and Kurt all in difficult positions where they had to choose to face their "grown-up" issues or retreat. Since this is Glee — you obviously know that they didn't shrink back from their necessary "real life" challenges. But even so, the episode delivered because while again, this is Glee, the characters actually did face growing pains that were within the realm of possibility. Mercedes and Rachel had to take a hard looks at what they wanted for their futures and what might hold them back and Kurt had to make a choice to take action or stand by and say nothing.

These characters that we've known for five seasons are coming into their own now. And Glee's becoming a very different show because of it.

This was unexpected, to say the least. We were introduced to Mercedes' back-up singers, Shanice and Tesla, during her performance of "(You Make Me Feel Like) A Natural Woman". And, surprisingly, they're actually new characters on the series — even though they kind of just seem like Mercedes' conscious personified. Okay, cool — we're always down with new characters either way.

Her new friends/performing partners have a harsh reality to serve up to the Beyoncé to their Kelly and Michelle — there's a problem with her choice in men. Sam shows up, unannounced, to their dinner and starts doing Cosby impressions and asking why all hip hop artists are named after cars (Tesla's named after the scientist and Mercedes after an actress). It's awkward. Really awkward — but at least we all agree that Sam's impressions are top notch. So what's the problem? Sam's white. And, according to Kelly and Michelle — I mean, Tesla and Shanice, oops — Mercedes dating a white guy is going to alienate black men and women from buying her record when it drops.

That's really all they have to say, which is disappointing because there's more to this issue than just that, but Mercedes takes their words and runs with them — straight home to break up with Sam. Ouch. After Kurt's incident, she realizes that she was wrong and ends up singing Amber Riley's new original song "Colorblind" in a Beyoncé-in-Dream Girls moment and they get back together.

Okay, Rachel is still kind of the worst — so when I say she made a "real world", "growing up" decision, I don't mean that she's grown up and decided to stop being terrible. But she does have a point — Rachel is damn busy trying to balance school and teching a Broadway show (from one theater girl to another, I feel her pain). So when Madame Tibideaux fails her and Blaine for performing a duet instead of an individual song at their critique — Rachel snaps and up and quits NYADA. Because she just has no time to reschedule her performance and Tibideaux is NOT trying to give her help she hasn't earned.

So Rachel's left at a crossroads — disappoint her producer and kill her dream role in her dream show or throw caution to the wind and give up her studies. She chooses the latter, deciding to put all of her eggs in one basket with Funny Girl because she knows she'll do well enough to book another show down the line. We don't actually hate her decision — this is her dream and she's always been ambitious — but one thing is for sure, Rachel Berry's come into her own since she feared Cassandra July. And that's something to pay attention to.

After trying to convince Rachel that she's making a mistake — the two have a falling out where Rachel calls Kurt out for hiding behind NYADA and not living life. Okay, that was rude. She storms out of the restaurant, leaving Kurt to go home alone and here's where his choice is staring him right in the face. Kurt walks out of the restaurant to see a group of guys beating up on a gay man in an alley nearby. He struggles for a second with what to do and ends up running up the alley to help. Still think he's playing it too safe, Rachel?

But this isn't about Rachel — this is entirely about Kurt and the fact that he's been fighting this type of violence for years, starting with Karofsky and the rest of those box-of-rocks football players. And now, instead of running away to another school, he's standing up for himself and someone else. Kurt ends up getting hurt and hospitalized, but he assures his father Burt (yay, Burt's back) that he knows exactly who he is now after this incident.

More like this
Jane Lynch Revealed Why She’s Leaving 'Funny Girl' After Lea Michele Was Cast
By Grace Wehniainen
Lisa Kudrow Explained How Her Body Image Changed While Filming 'Friends'
By Grace Wehniainen
17 Years Ago, 'Hannah Montana' Reportedly Almost Cast This 'Gossip Girl' Star
By Grace Wehniainen
Netflix Reveals First Look At Wednesday In The 'Addams Family' Spinoff Series
By Bustle Editors
Get Even More From Bustle — Sign Up For The Newsletter