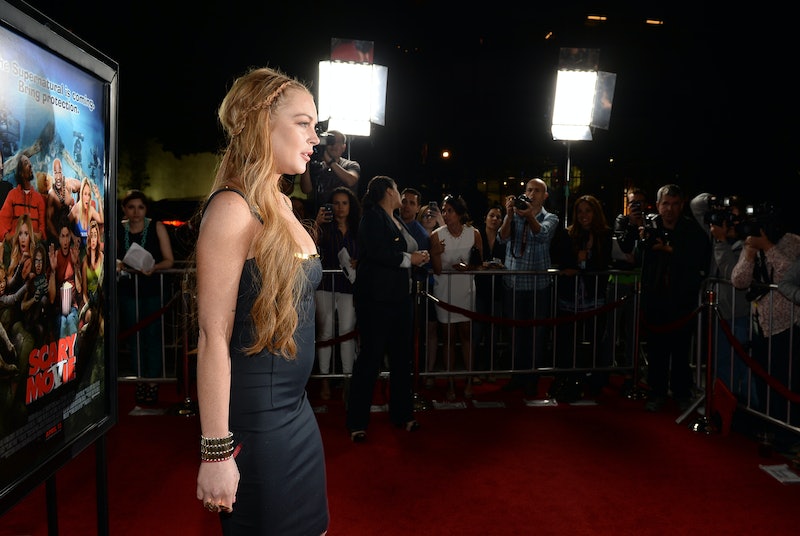 Sunday night during the final moments of the season finale of Lindsay Lohan's docu-series on OWN, Lohan revealed she had a miscarriage during the course of filming, which caused her to miss being on the set. The series was a chronicle of her addiction and time after rehab, and ending on such a bizarre, confessional note seems strange. In the interview with the producers, Lohan meditates on the meta-experience of filming and watching the series, which is when she makes her confession: "No one knows this, and we can finish after this, I had a miscarriage for the two weeks that I took off,” she said. "That’s why on the show when it says, ‘she didn’t want to come down, she doesn’t want to come down,’ I couldn’t move, I was sick,” Lohan explained. "And mentally, that messes with you."

To even call Lohan's decision to share the details of her miscarriage a "confession" feels wrong; it implies some sort of shame, which just serves to amplify an already painful experience. On the one hand, for Lohan to reveal something so personal to the cameras is fortifying — it seems like she really is improving, and if the series was aiming to show her progress, then it succeeded. But there's something more sinister that bristles here: it strikes as though Lohan and OWN were using the "shocking conclusion" as a ratings booster, which we really hope is not the case. It also feeds into the drama of Lohan's released "sex list," and makes all of us who are thinking, "Well, who was the father?" complicit in a gross, gossipy shaming of Lohan's miscarriage admission.

If Lohan and the producers of her series, though, used her miscarriage to cause a buzz, it's disappointing. Obviously something so personal caused a deep pain in Lohan's life, and it shouldn't be used for fodder on her reality series. And viewers, of course, see Lohan as a character, and discussions will abound about who the "baby daddy" is, discussions that only further the stigma that miscarriage is shameful, when it's already such a lonely, personal situation. To speculate about who the father of the child is is just as deplorable as the possibility that the reveal was planned to boost the ratings of Lohan's series finale.

We can't say what Lohan's motives were for her "reveal:" maybe she really was genuine and reaching out and trying to make a connection with her audiences. We hope it's nothing more sinister than that, because she really did seem to be getting better.

The most poignant part of the confessional interview, though, came when Lohan explained how she feels detached when she watches herself on screen. And with the new revelation that she had a miscarriage, her distance seems even sadder: "Watching this series, I just know how I felt at that moment and I can relate to that girl, which sounds kind of crazy. This is really sad, like, 'Who’s helping her?'"