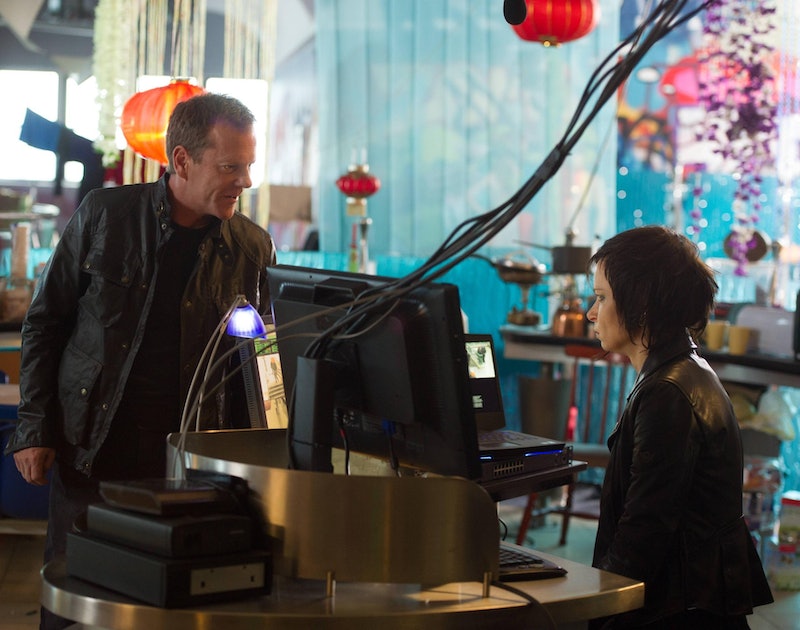 Kiefer Sutherland's rogue CTU Agent Jack Bauer had become a cultural touchstone through eight seasons of assassination attempts, bomb threats, cyber attacks, and nuclear explosions by the time 24 aired its series finale. Whether you agreed with his torture-happy tactics or not, there was plenty to love about Jack: his unwavering loyalty to his country, his ability to get shit done, and, of course, his trademark catchphrase — "Dammit, Chloe!"

So naturally, we couldn't be more excited that he's making his triumphant return to television tonight with the limited series event 24: Live Another Day . This time around, the season will only consist of 12 episodes, which should streamline the story and forgo the sillier time-filling subplots that plagued some seasons, like when Kim took a detour to cougar town. (No, not that one. Not that one, either. Yep, that's the one.) But even the most diehard of 24 fans might need a little refresher course to get them primed for the new series, since the last time he was on the air, the Olympics were happening in Vancouver. (Remember those? Yeah, neither do we.)

Let's check in with Jack & Co. and see where all the important players were when the clock ticked down to 00:00:00 on Season 8.

When Jack discovered that Russian President Suvarov was conspiring with former U.S. President Charles Logan to cover up the fact that Suvarov was involved in the assassination of Iranian President Hassan, Jack targeted them both for execution. (Their plot had also resulted in the death of his lover, Renée Walker.) Thankfully, Chloe was able to talk him out of killing them, and the two worked together to expose the plot. Logan got wind of this and targeted Jack for assassination, but U.S. President Taylor's conscience finally got the better of her, and she admitted to her part in the cover-up. She called a halt to Jack's execution, but, due to his attempt to assassinate both Suvarov and Logan, he was still labeled an enemy of both the Russian and American governments. Despite all he had done and been through, Jack was forced to flee the country as a fugitive from justice. He's been living off the grid ever since.

When Chloe joined 24 in Season 2 as a CTU analyst, few suspected that this mousy but talented computer whiz would turn out to be Jack's most loyal sidekick through seven seasons of national disasters. She frequently put her own job, reputation, and life on the line to help her boss/mentor/friend, and was never fazed, no matter how many "Dammit!"s he threw her way. The fan-favorite character got the final line of the original series, as she called off CTU's drones to allow Jack time to escape, tears streaming down her face: "Bring the drone back to base. Whatever happened here didn't happen. Shut it down." It was revealed in the Season 8 DVD bonus features that Chloe was arrested for facilitating Jack's escape. When Live Another Day begins, she's gone full Lisbeth Salander: she's now dressing like a punk and working for a notorious hacker in London.

The last time we saw Jack's former flame, she wasn't exactly in a talkative mood. The daughter of Secretary of Defense James Heller and Jack fell in love while he was working as a member of Heller's security. When Jack was kidnapped by the Chinese government at the end of Season 5, Audrey followed him to China to try to secure his release, only to end up a captive herself. By the time they finally released her, she was a shell of her former self, having been tortured with brain-damaging chemicals. Jack said a sad farewell to a catatonic Audrey in the Season 6 finale, and we haven't seen her since. Apparently she's gotten much better in the interim — she's now married to her father's Chief of Staff, Mark Boudreau.

As Secretary of State, Heller was an imposing presence. He was no-nonsense, great at his job, and every bit a true patriot. When the villainous Christopher Henderson demanded that Jack let him go or he would have his men assassinate Heller, Heller sacrificed himself to ensure the safety of the nation. He drove his car off a cliff into a lake... but miraculously survived. However, not even his respect for Jack can measure up to his fierce protectiveness of his daughter. After a catatonic Audrey was rescued from China, Heller forbade Jack from seeing her out of fear that his enemies would hurt her again. Heller refused to back down even at gunpoint, and Jack was forced to say his goodbyes to Audrey. In the time between Season 8 and Live Another Day, Heller has become President of the United States.

Jack's daughter went through many iterations during her time on 24: rebellious teen, responsible nanny, CTU intern. When last we saw her in Season 8, she was visiting Jack in NYC with her infant daughter Teri. She had just convinced her father to move back to LA with her when the day took a sudden turn for the worse. Needless to say, Jack never made it to Los Angeles. Everyone involved in Live Another Day has insisted that Kim doesn't make an appearance in this limited run — but 24 is a show known for its secrecy, surprises, and twists, so don't be too shocked if she pops up at some point.

Of course, Live Another Day, which takes place in London, will feature a slew of characters we've never met before. Here's a super quick introduction to a few of the most important players.

The head of the CIA team responsible for tracking Jack's whereabouts in London.

A CIA field operative and the widow of a disgraced CIA agent who sold secrets and then committed suicide. (Oddly, Strahovski plays the second blonde woman named Kate on the series, after Season 2's Kate Warner.)

The widow of a notorious terrorist. Probably up to no good.

Get pumped up for Jack's return with this pulse-pounding promo, dammit!