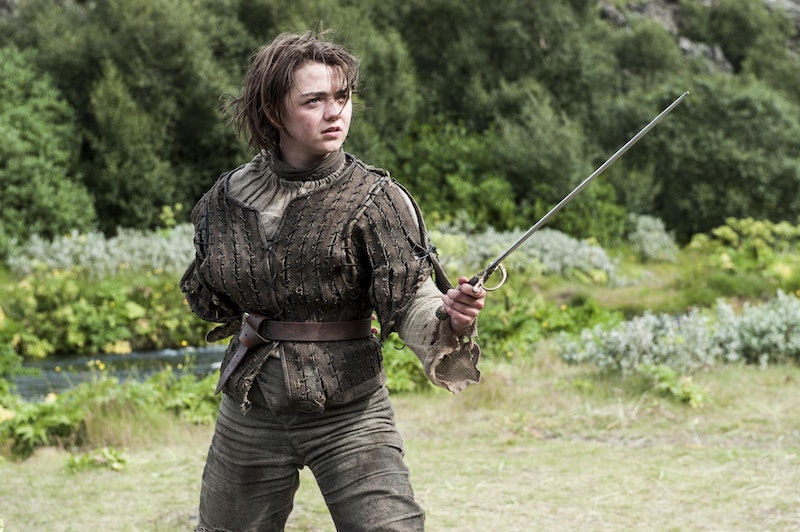 Not only is this Sunday the day before Cinco De Mayo (hello, margarita brunch), it's another episode of Game of Thrones, which means this is the best weekend ever for me because I love Cinco De Mayo almost as much as I love Game of Thrones. The trailer for this week's episode, "The First of His Name," shows how epic the episode will be, but nothing amps up the anticipation more than photos from the episode because that means it's PREDICTION TIME. A Game of Thrones picture is worth a thousand words, even if we like to limit it to a tweet or two. But anyway! Let's get crackin'.

The last two episodes have been rather tame — at least, for the world of Westeros. No one is jumping to call a baby morphing into a White Walker tame, but bloodshed has been minimal. Still, that's typical for Game of Thrones, which lets its viewers ride the roller coaster of the Seven Kingdoms: crazy shit happens, and then things calm down — the calm before the storm, essentially. Then a storm happens, something akin to the Ned Stark's beheading, The Red Wedding, or The Purple Wedding, and then we take to Twitter like voracious and hungry direwolves.

Oh, and SPOILERS ahead if you're not caught up yet.

So last week, as we veered closer and closer to Tyrion's trial, we discovered that the ever-sketchy Littlefinger with his creepier-by-the-week molestache (SERIOUSLY, SANSA'S A KID) had a hand in plotting to kill The King of A-holes, Joffrey, alongside Olenna Tyrrell. Sansa is unfortunately still on that boat with Littlefinger, but at least she's getting the great storyline that she deserves after seasons of pouting and looking at her dad's head on a pike. Dany has continued to prove to be a BAMF, and Jaime's got Brienne fooled that he's a good guy, but we know better than that. Brienne's on a horse with Pod off to find the Stark girls, but who the hell knows what the bloodthirsty Arya is up to now, since we didn't see her last week. But we will see her this week! Let's take a look at these photos and start analyzing:

There she is — sticking somebody with the pointy end of her sword, Needle. The trailer showed her attempting to stick her sorta-kinda-compatriot, The Hound, with Needle, so we've got to wonder: is Arya going to kill The Hound, and begin a journey...alone? Arya has had, without a doubt, one of the most interesting trajectories in the show, albeit a tad concerning for parents of kids who take "dancing lessons."

This might be the moment when Dany finally starts heading towards Kings' Landing. We've seen her take enough cities and free enough slaves. We've heard her speak Valyrian and give ample Braveheart speeches. Girlfriend's the Mother of Dragons, we know. So show us more dragons, please! Also, that sex scene with Daario is inevitably upon us in the near future, and those eyes look flirty. However, dragons may very well be the best birth control there is.

There's Tywin, looking serious. This could be a moment when Tommen is crowned King, or a moment in Tyrion's trial. With Tommon, the equivocal "yes man" to Tywin's strategizing, Tywin will have more of a hand in things than he's ever had, which means more awesome scenes with Charles Dance and his incredible speaking voice. And while we're talking about hands, he's bound to have a bit of an issue with the handless Jaime, for hom he has more and more distaste. Love those Lannister scenes!

Is Sansa in hiding? Running away? Or is that cape part of some fetish Littlefinger has? She's probably on the go, escaping Littlefinger, and if she's alone — and little sis Arya is alone — might we have a Stark sister reunion? Now there's a Stark reunion I'd love to see. Much as I love to talk about Bran's hair, the Stark sisters have had far more interesting storylines than the remaining Stark boys.

Prince O for Orgasm! I mean, Oberyn. If Cersei and Oberyn are having a chat, the trial is very well upon us, as Cersei wants Tyrion to go down into the seven hells, and Oberyn is one of the judges. These are two of the most well-written characters on the show with some of the snappiest dialogue — watching them in a scene together will be undeniably thrilling. But you've got to wonder: will there be sexual tension? Oberyn can charm the pants off of anyone (literally), and Cersei always wants people who she shouldn't, like, you know, her brother.

There's so much to speculate from these pictures, but still, with Game of Thrones, it's best to always assume that something shocking is upon us, and just like Jon Snow, we know nothing.

More like this
'Bridgerton’s Jonathan Bailey & Simone Ashley Just Teased A First Look Of “Kanthony” In Season 3
By Grace Wehniainen, Alyssa Lapid and Sam Ramsden
The 'PLL: Original Sin' Creators Say A’s Identity Will Be “Very Clear” By The Season Finale
By Alyssa Lapid
'The Capture' Is Finally Back – & S2 Looks Tense AF
By Sophie McEvoy and El Hunt
'The Sandman’s Ending Is A Departure From Neil Gaiman’s Comic Book Series
By Kadin Burnett
Get Even More From Bustle — Sign Up For The Newsletter