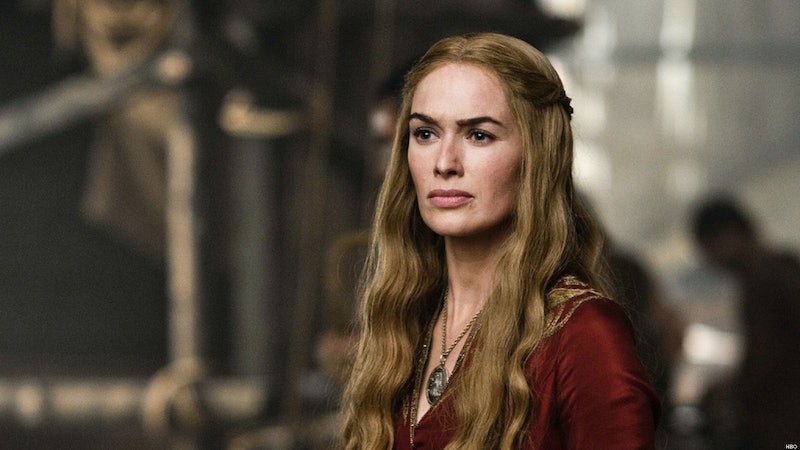 Things aren't always what they seem on Game of Thrones and on Episode 5 of Season 4, "The First of His Name," we saw that Game of Thrones ' Cersei Lannister actually has a redeeming quality: she's a mother. We could ask whether she's a conniving, vengeful psychopath or a mother who loves her kids, but these two are not mutually exclusive. Sure — Cersei's vengeful ways know no bounds, but despite her actions, her maternal instinct may very well serve as her justification.

In this episode, we saw Cersei in perhaps one of her quietest, most civil moments with Margaery as her son Tommen was crowned King (without Ser Pounce because we're not going to be seeing anymore of him, sadly). First of all, we can't dismiss that Margaery called her "sister," and does anyone else remember when Cersei told Margaery that if she ever called her "sister" she'd make sure she'd be killed? Anyway, Cersei seemed oddly pleasant here, and we can't be quite sure why: is this because she loves Joffrey and Margaery is a clear connection to him, or because she's trying to make ties with absolutely everyone she can to ensure Lannister power?

Let's take a look at the evidence: She acknowledged that Joffrey was indeed a nightmare to Margaery, but she also mentioned that he was her son and she loved him. If Cersei is desperately seeking to avenge Joffrey's death by seeing to it that Tyrion is killed, then we can just take a bunch of steps backwards and say, "Okay, here's a mother who's lost everything and will not be at peace until her son's death is avenged." That's viable, but we also have to look at how she made a point to make peace with just about everyone she could, and amidst every peacemaking, pleasant moment she had, there was some undercurrent of power.

She spoke with Tywin, who revealed that the Lannisters may actually not be able to pay their debts, and that the Tyrells are a critical resource. Aha! Cersei's civility towards Margaery may have very well just been a ploy in a power play. Later, she requested that Oberyn give her daughter Myrcella a ship because she misses her daughter so very much — but wait a second. Oberyn is also a judge for Tyrion's trial (which looks like will happen in Episode 6).

So who else is a judge on Tyrion's trial? Her father, Tywin, and Olenna Tyrrell. So Cersei's makin' peace with everybody on the trial all in the name of her son? Or power? Or is it all just a twisted mess? Let's take the ship she requests for Myrcella, for instance: Is that really because she misses her daughter, or is it because it let Oberyn become her ally in order to assure that Tyrion is killed on the trial and because if she cannot be Queen and she must not be with the man she loves slash resents (Jaime), then at least she can be a mother, right? The lady is twisted and so conflicted. It's pretty epic. (What I wouldn't give to see Lena Headey play Lady Macbeth.)

And this is why Cersei is a phenomenal character. She's got that duality that makes us wonder what her motivations are. Sure, she reads as the iciest bitch on television, but we get these inklings of humanity. She may seem evil, but she at least has some sort of objective prompting her actions — even if she's still a Real Housewife of Westeros.

On that note, at least we can't call Cersei crazy, even if she is conniving and a heavy drinker. Now that Lysa's back in the picture, Cersei's views on motherhood are starting to look pretty tame. Cersei may be a mixed bag, but at least Joffrey didn't breastfeed on the Iron Throne. Gross.