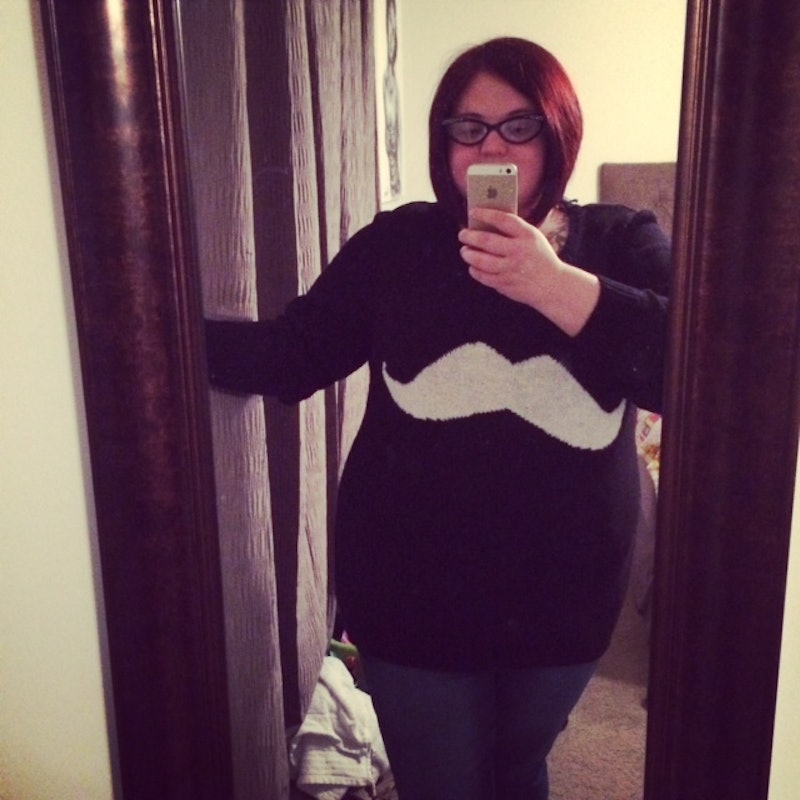 I have an admittedly weird relationship with food. It’s kind of like that friend you had in college who is incredibly fun to be around when you're partying...until you have to deal with the messy aftermath and moral hangover. I enjoy cooking and eating delicious food, but I have always experienced an incredible amount of guilt with eating anything other than “healthy” foods.

For the longest time, I wouldn’t keep butter in my apartment. Nevermind that butter is delicious and incredible, I just “couldn’t be trusted around it.” To this day, if I buy a soda at a fast food restaurant or convenience store, I drink about two fingers of it before letting it all go to waste because I feel guilty about “drinking my calories." After spending my entire life dieting, I fear that every single calorie is going to visibly attach itself to the widest part of my ass.

And I know exactly where these fears come from.

I went to my first Weight Watchers meeting as a middle schooler, and even then, I knew it wasn't for me. I didn’t want to sit around a bunch of middle-aged women and swap low-calorie recipes. I didn’t make it through too many meetings, but I continued to use their guidebooks and eventually their online tracking tools for a number of years. If you aren’t familiar with the way Weight Watchers works, they assign dieters a number of “points” to eat each day, and every food is assigned a point value. Even though I’ve been off the program for at least two years now, I can still recite the points values of foods I used to eat regularly. Instead of buying the bread I liked, I would buy the bread that was the lowest number of points. I ate a lot of disgusting fat-free Greek yogurt before realizing that the full-fat versions are actually very good, and good for you.

Tracking points for years has had a profound impact on how I feel about eating, losing weight, and my body. I have written before about how dieting ruined my eating habits, but with recent stories of drastic weight loss in the news, and a glut of "bikini body" articles clogging the Internet with the onset of beach season, I started thinking more specifically about how instrumental Weight Watchers was in skewing my relationship with food. Here are five of problematic legacies that Weight Watchers left me with.

1. Weight Watchers made me hate vegetables.

I didn’t hate vegetables before going on Weight Watchers. As a kid, my grandparents had a garden and when we would visit, I would chow down on just about everything they put in front of me — green beans, okra, collard greens. But when I joined Weight Watchers, the insistence on eating vegetables was particularly strong, and the preparations were totally different. There was no butter or smoked ham in these green beans, only cooking spray and some boring old Mrs. Dash. I grew to believe that if I added any “unhealthy” ingredients like bacon or ghee that the veggies I was eating were no longer healthy, and that’s a serious problem because vegetables are awesome. Putting bacon in a dish of brussels sprouts doesn't automatically erase the fact that they are a great source of fiber and vitamin C.

2. Weight Watchers screwed up my sense of satiety.

No matter what the perky Weight Watchers leaders tell you about the program’s insistence on a balanced diet, every meeting I attended and forum I read focused on one thing: how can I eat as much food as possible without eating too many calories? This meant that I would eat piles of bell peppers, celery, and carrot sticks until I was full. Of course, the caloric intake of these “meals” was so low that I would end up hangry just a few hours later and eat something high-calorie. I still struggle with balancing vegetables, proteins, and starches, simply because I’m worried about being able to eat a large volume of food, even if I don't necessarily want it. In some ways, Weight Watchers encouraged my overeating of higher-calorie foods by skewing my idea of what was actually satisfying.

3. Weight Watchers made stepping on the scale a nightmare.

What they call “accountability,” I call weight-shaming. Before each meeting, people step on the scale to see how well they’ve done. It’s supposed to be private, but that’s a real joke. It’s pretty clear to tell that someone’s gained weight when you see the tears well up in their eyes and they say “I thought I had done really well this week.” It’s also impossible to not overhear the woman exclaiming “I just lost seven pounds in seven days!” The weigh-ins were largely why I stopped going to meetings, but I would still step on the scale at least weekly until I threw my scale out with the rest of the garbage last year. I can now appreciate my body for what it does, like carry me around to do the things I enjoy, instead of what it looks like. Even though it looks pretty great, too.

4. The ups and downs of Weight Watchers create a nasty feedback loop.

When I was seriously doing the program, I knew exactly what I could do to drop weight before my next meeting or weigh-in. If I had been “bad” and splurged at a nice dinner or had a few extra slices of pizza, all I had to do was eat next to nothing for a few days while drinking gallons of water. Nothing was more rewarding than the number on that scale being lower than it was before, and I would do whatever it took to get there. When the number was higher, I would simply intensify my efforts and eat even less. Losing weight is highly motivating — people constantly tell you how great you look, which only encourages unhealthy behavior.

I could probably buy a brand new, fabulous, plus-size wardrobe with the money I’ve spent on Weight Watchers books, measuring tools, and online memberships. Sometimes I stuck to the program for several months, and other times I gave up a few weeks after signing up because I’d had too many “cheat days” in a row. Even as I was becoming an independent adult, working on my career, and generally enjoying my life, I still felt like a failure because I was never able to drop the weight.

I’ve vowed to myself to never give the industrial diet complex another dollar of my money, but I will probably lapse and end up buying some stupid diet pill or “nutritional plan.” Weight Watchers may have been part of my past, when I struggled for years with food and dieting, but I won’t let it determine my future.