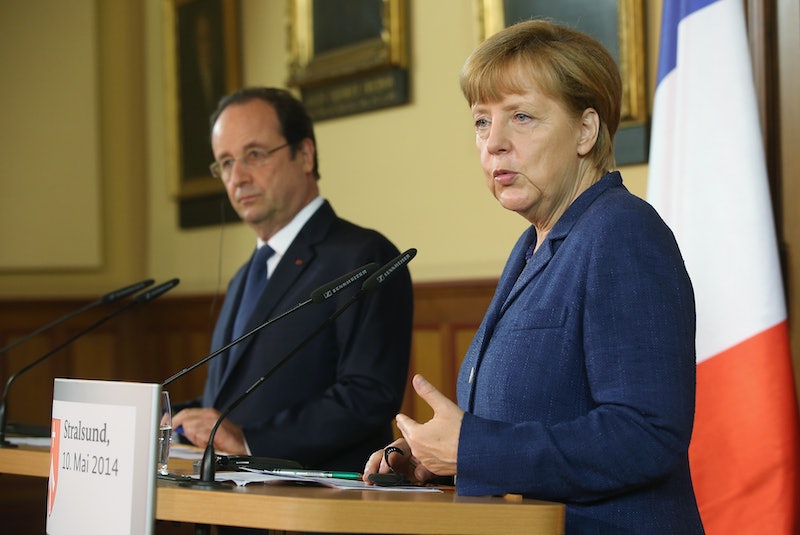 In a joint statement on Saturday, the leaders of Germany and France threatened Russia with further sanctions if the country tampers with Ukraine's upcoming election. French President François Hollande and German Chancellor Angela Merkel called for a "visible" withdrawal of Russian troops from Ukraine's border by the May 25 election. They also called for a dialogue between Ukrainian leaders and separatist activists.

"We are ready to take further sanctions against Russia," Merkel and Hollande announced. "There have been initial signs, but this must be strengthened so that the message gets through to eastern and southern parts of Ukraine that everyone wants fair and general presidential elections." They warned that if the election does not take place due to Russian intervention, Ukraine would be "destabilized" and fall further into chaos.

Although Russian President Vladimir Putin claimed on Wednesday that 40,000 troops had been withdrawn, NATO noted no signs of retreat. Putin's stated requirement for supporting the election – an election that Merkel and Hollande stressed is "internationally recognized" – would be a scaling down of Ukrainian military action. Interestingly, France and Germany on Saturday called for similar actions, asking Ukraine use only "proportionate" force in protecting people and infrastructure, and not to take offensive actions against the rebels before the election.

Hollande and Merkel also warned that separatist referenda being held in Ukraine on Sunday are "illegal," simultaneous with acting Ukrainian President Oleksandr Tuchynov's stated fears that they would mean "complete destruction." The two referenda would declare independence for two Ukrainian regions that would then be able to join Russia. Even Putin has asked separatists to delay the referenda pending diplomatic dialogues. Still, the vote is expected to go on as scheduled.