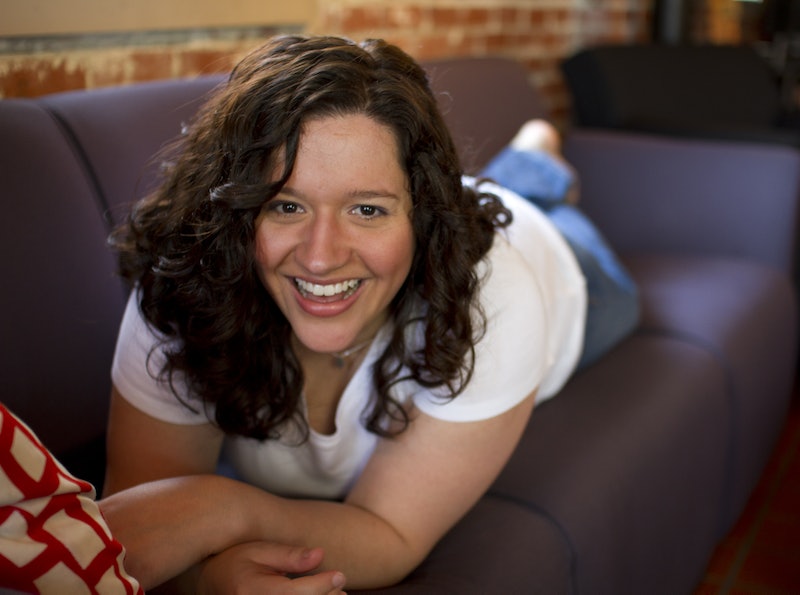 The Selection series isn't your ordinary young woman-meets-Prince-Charming story. For one, the protagonist America already thought she had her Prince Charming back in her impoverished home. Second, America meets Prince Maxon during a televised competition to win the throne.

In 2012, Kiera Cass started a The Bachelor-like romance series different from the gritty YA dystopias already on bookshelves. May's The One (HarperTeen) brings the series to an end, and also ends the in-book competition for Prince Maxon's heart and kingdom.

Cass talked with Bustle about the non-reality-show origin of her story, dystopia novels, and how the stories of The Selection aren't quite over with The One.

BUSTLE: Where did you get the idea for the concept behind the Selection series? Where there any real-world inspirations behind the themes?

KIERA CASS: Lots of people asked if I watched The Bachelor , but I never did. Well, one season after The Selection sold, just so I'd know what was going on. But the idea for The Selection came from wondering about the "what-ifs" in two other stories: Cinderella and Esther from the Bible.

Esther ends up being plucked from her home to compete to be queen and, win or lose, she's never going to leave the palace. She wins, which is amazing, but I was always very curious about her heart. Did she maybe like the boy next door before she left? And Cinderella never asked for a prince. She asked for a night off and a dress. We assume she's happy, but what if she wasn't? What if being a princess was overwhelming for her? So those two things married in my head, and The Selection was born.

If you don't watch The Bachelor, do you watch any reality TV yourself?

I like Deadliest Catch and shows where they cover up bad tattoos ... I think that's all the reality TV I watch. I'm more of a comedy girl.

YA dystopia has been a major trend in the market in the past few years, how did you work to make the Selection series stand out from the rest?

I actually never set out to write a dystopian. I wanted to write a fairytale, but I couldn't find a place to set it, so I ended up inventing my own future. I think that's something that makes it read a little differently than books like The Hunger Games or Divergent . Those stories have a grittiness and a toughness to them that my books don't. So it's sort of an alternative, I suppose.

When you wrote The Selection, did you aim for it to be a trilogy, or is that something that it grew into as you were writing? What did you hope to achieve with the finale, The One?

As I started writing, I knew it was going to be more than one book, but I didn't know how much more until I really go into it. I studied history in college, so I didn't really understand the idea of arcs in stories, so it took some work to make each book self contained. And the finale — well, I hope I tied up all the strings, and I hope America is pleased with how it's been told. I think she is.

In The One, more so than the rest of the series, the final four Elite really band together as friends — notably with the changing of Celeste. Was this something purposeful? Why was it important to you to make them friends, rather than enemies and competitors?

I think the concept of catty girls is grossly exaggerated. I've been through experiences where another girl and I had feelings for the same guy, and we were just open with each other and ended up being friends. It's an unfair portrayal, I think.

I think the concept of catty girls is grossly exaggerated.

In The Selection there's a bit more than a boy at stake, so it's easy to see why some of the girls (namely Celeste) went to the measures they did to get what they wanted. But I always knew she was like that, that she was mean because she was worried. I have a soft spot for her in my heart.

There has been some controversy lately about young adult literature, particularly surrounding the release of Gayle Forman's If I Stay, with the star Chloë Grace Moretz saying the novel "isn't really YA," and continues to cut down the genre. Do you ever feel a stigma writing YA?

It's unfortunate, because I think she set out to praise Gayle, which makes perfect sense because the story is fantastic. But it's kind of like telling a girl she's cool by saying she's not like other girls. I guess I'm one of the lucky ones because in my immediate life, everyone is really proud of what I create. And I know not everyone in the world feels that way, but I really don't care. I write primarily for teenage girls, I think they're awesome, and I don't waste time with the rest.

I write primarily for teenage girls, I think they're awesome, and I don't waste time with the rest.

What's next for you? Are you working on anything currently?

I just got to announce that I'm working on a prequel to The Selection from [Queen] Amberly's perspective, and I'm very excited about that. And, of course, there are plenty of other things going on in my head. More on that soon!