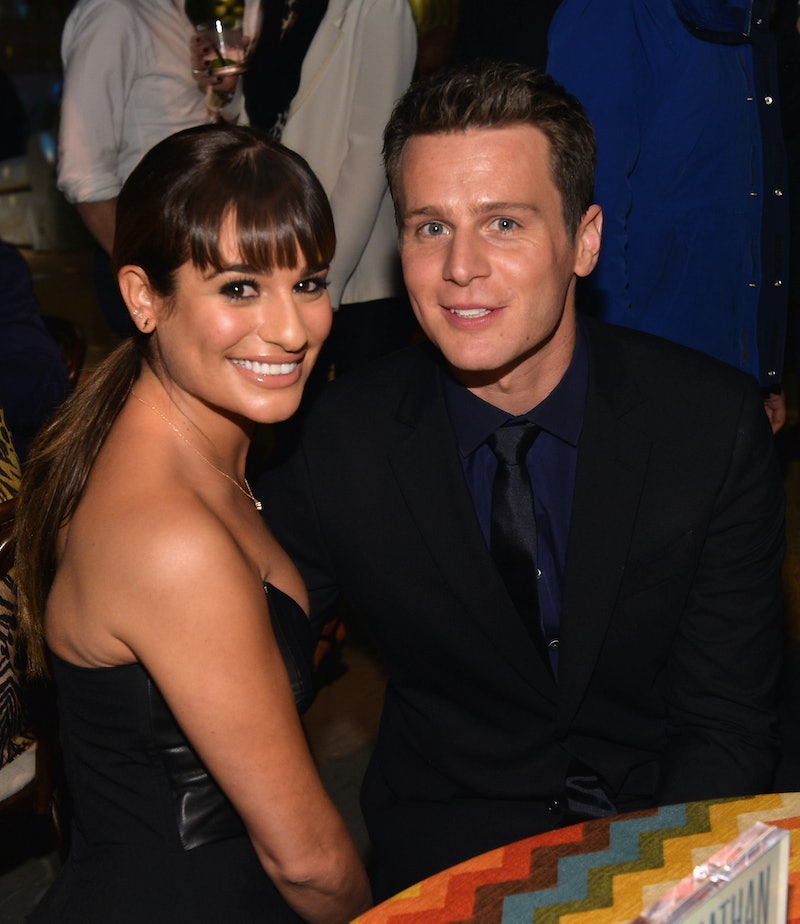 I'm sure you know better than to think that Lea Michele are her former Glee costar Jonathan Groff are dating, right? Of course you do — but what about the rest of your favorite Glee stars? The series is regularly tackling issues within the relationships of Kurt and Blaine, Sam and Mercedes, and Brittany and Santana. But with the exception of a few of the show's stars, we don't really know very much about who they're dating IRL. Spoiler alert: Chris Colfer and Darren Criss don't actually date in real life.

Though, no one would blame you for thinking that — considering the pair on onscreen soulmates that have weathered many-a-storm together. However, you might be surprised to know that many of Glee's stars actually fly solo — yes, even Chord Overstreet with his adorable, acoustic YouTube channel. So, do you know your Glee star romantic trivia? As we look ahead to the Season 5 finale that's sure to see the dissolution of some of our favorite couples, let's take a look at which former-McKinley High School students are in real life relationships. And which stars are still searching for the right person to merge their names with — I mean, Brittana didn't happen overnight, people.

I know, she's not technically a series regular anymore — but after almost five seasons of enduring Tina Cohen-Chang, how could we forget about Jenna Ushkowitz? Especially since she's dating Vampire Diaries heartthrob Michael Trevino since they were first spotted together in 2011.

It's been a long-standing rumor that the notoriously private Chris Colfer is in a relationship with Post Production Coordinate Will Sherrod since early 2013. But even though they're rarely seen as a couple and there are very few details about their relationship on the web, it's obvious that they've got something huge in common — a love of impressive, over-the-top Halloween costumes.

A couple that loves The Labyrinth together, stays together. Now, did you know that Darren Criss was in a long-term relationship? Probably not – because the star never really answered questions about his personal life until the summer of 2013 when Criss revealed that he had been dating Swier, a writer and producer at FOX for many years. Like, since before he debuted on Glee way back in Season 2. He might not be dating Chris Colfer — but Criss and Swier sure give Colfer and Sherrod a run for their money in the Halloween costume department.

McHale was previously linked to costars Jenna Ushkowitz and Amber Riley, but has since remained pretty quiet about his personal life. He did recently go on vacation with the newly single Naya Rivera and a few other friends Mexico — may be one of them is the lucky lady in his life.

Would you stop asking Lea Michele if she's dating anyone, already? The Glee star hasn't jumped back into the dating pool yet, but she did post a touching tribute to her late-boyfriend Cory Monteith on his May 11 birthday. Since Cory's untimely death last summer, Lea Michele's relied on the BFF Groff to be her trusty sidekick to basically every event. But, seriously, everyone — they are not dating. So don't ask.

Here's another extremely private Glee star. Riley hasn't been romantically linked to anyone since her career launched on the FOX musical series. But really, how could she have the time — the girl won Dancing With The Stars, she's working on an album (which sounds pretty damn amazing from what we've heard), and launched Rileyland Fashions, a website that lets fans buy clothes directly from Riley's closet. You do you, girl.

Rivera had a hell of an April. The Glee star was previously engaged to rapper Big Sean, went public with her relationship in April 2013 and he put a ring on in Oct. 2013. But, sadly, Sean called off the engagement six months later in April 2014. Rivera's been flying solo since — all the way to Mexico with costar Kevin McHale where she knocked the thong-bikini butt-selfie thing out of the park.

And here we have another Glee star with a recent heartache. Overstreet's Sam Evans might be going strong with Mercedes on the show, but his real-life relationship with actress Halston Sage ended in early April 2014. And, around the same time as their break-up went public, Sage was seen out with another young Hollywood hottie with great abs — Zac Efron. But hey, now he's free to go after the love of his life, Sandra Bullock.