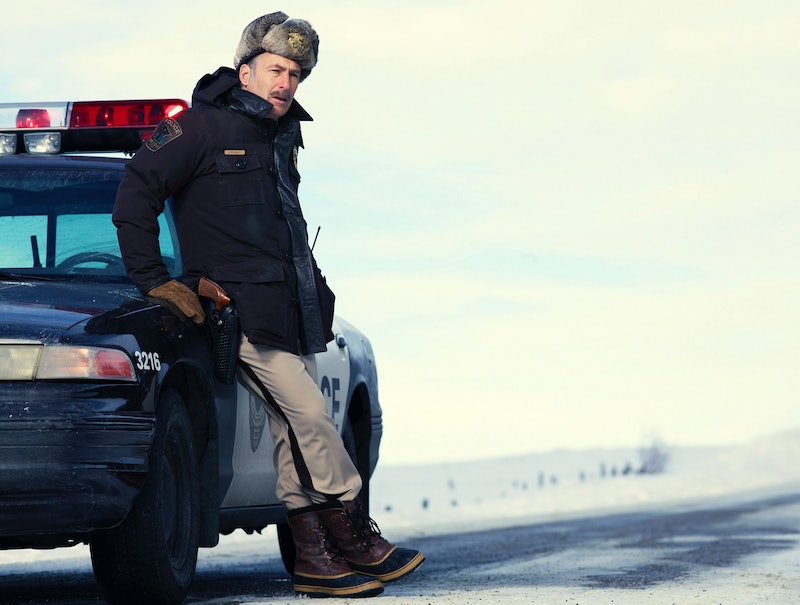 Oh, geez, we sure hope Bob Odenkirk's role in Fargo doesn't mean that Better Call Saul will be delayed. We've been gearing up for the highly anticipated Breaking Bad spin-off ever since our favorite meth show ended, and we don't want anything to get in the way of our epic reunion with Saul Goodman (and Huell, of course).

Don't get us wrong; we've been completely loving Odenkirk's role as the useless Deputy Bill Oswalt, but we love Saul way, way more. And with the projects so close together — filming for Better Call Saul begins at the end of May — it makes us just a tad anxious. But here's the good news: It turns out we have literally nothing to worry about. According to Collider, as of the end of April, Odenkirk hasn't even read a script for his fictional character's namesake show. Phew.

I haven’t read anything from Better Call Saul, so I don’t know anything except the vibe I’ve gotten, which is that that show is going to be pretty intense and dark. I think Fargo might be more overtly comic and lighter than Saul, but that’s just conjecture based on guesswork and wishes on the wind.

Now that we know Better Call Saul is still on it's intended course, we can truly appreciate Odenkirk's role in Fargo and what it means for the Breaking Bad prequel. The sketch-comedy performer plays the innocent, dimwitted, weak-stomached, and stubborn deputy, but for some reason, we still love him to pieces. Even though he's annoyingly getting in the way of everyone doing effective police work, his Minnesota accent keeps on attracting us to his character. (Plus, we know Saul a.k.a. Odenkirk is underneath that mustache and furry hat, so we can't help but laugh at everything he says.)

And even though Odenkirk isn't one of the stars of the show — isn't Billy Bob Thornton way too good at being a manipulative yet hysterical murderer? — only good things can come from him acting alongside so many veteran actors. He's had the talent and good luck to work with great performers from one show to the next — Bryan Cranston, Anna Gunn, Aaron Paul, Colin Hanks, Martin Freeman, Allison Tolman, and Thornton — and that can only help his drive and ambition when it's time for him to step into the spotlight and totally own being a cheap and conniving lawyer.

You hear that, Saul? We're ready for your shenanigans.