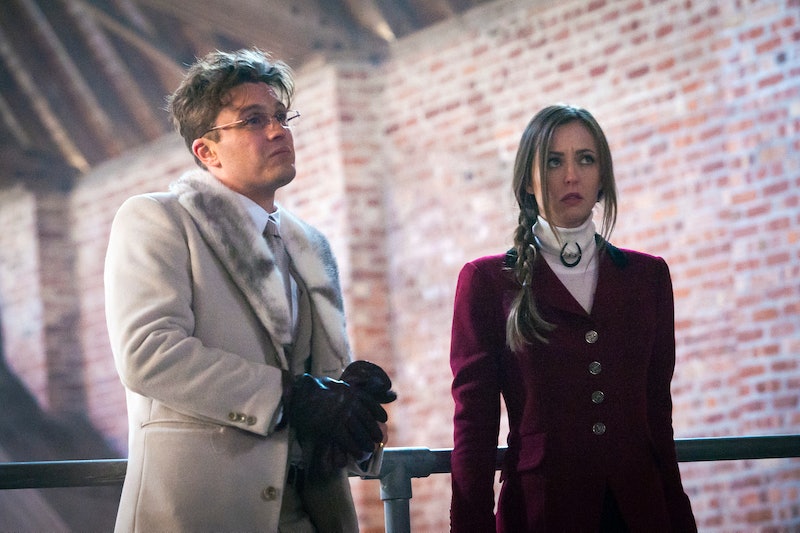 On last Friday's Hannibal, Mason Verger (played to despicable perfection by Michael Pitt), committed an act against his sister Margot (Katharine Isabelle) so unspeakable that a court of law would probably just put her on probation if she murdered him. Even those of us who are familiar with the siblings' relationship in the books were shocked.

In the novel Hannibal, it's specified that Mason is a pedophile; luckily we don't see any of that in the show. Instead, TV Mason is responsible for an entirely new brand of horror. In the episode, Margot revealed to Hannibal and Will that she was pregnant with Will's child. Hannibal, in turn, hinted the news to Mason, who realized his sister had found a loophole in their father's will (it stipulated that in the absence of a male Verger heir, the entire family fortune would go to the Southern Baptist Convention).

Mason knew that if Margot produced a male heir, she would kill him the first chance she got. So what did he do? He brought in a team of surgeons to operate on her and make it so that Margot could never bear a child.

Obviously, for this Margot deserves to kill her brother and now has nothing holding her back from doing just that. Mason might have destroyed his sister's chances of producing an heir and inheriting the family fortune, but he also gave her zero reasons not to just kill him right now. The question is, will she get to? We have a few theories about how Mason will die, and not all of them are "at the hand of Margot."

This would of course be the most satisfying — Margot and Mason have only appeared in a few episodes, but it didn't take long for Fannibals to wonder when we'd get to see Margot stab or shoot or push Mason into his vat of wild pigs. However, unless she recovers from the horrific abortion and sterilization by this Friday or next Friday's episode, it seems like she's down for the murdering count.

After listening to Margot's horrifying stories about her brother, Hannibal has had it in for Mason even before meeting him. When the two finally came face-to-face you could practically feel the "I'm going to kill and flay you so hard" waves radiating off of Hannibal.

Though at the end of last Friday's episode Will essentially sold Hannibal out to Mason, it was clear that seeing Margot lying in the hospital and knowing his future child had been murdered in cold blood messed Will up good. In spite of himself he'd already started daydreaming about fatherhood, not to mention the whole situation stirred up his feelings about Abigail. Will has proved he has the capacity to kill, and Mason might just push him over the edge.

Hannibal and Will Kill Mason Together

A few photos for this week's episode were released, showing Hannibal and Will looming over Mason. In one image, Hannibal clearly has a cut on his forehead, most likely suffered when he was attacked by Mason's thugs. We do see Hannibal being hoisted up, about to be fed to the pigs, but our instincts tell us Will, wanting to bring the cannibal to justice rather than letting Mason kill him, saves him in the nick of time — just before the pair pay a visit to Mason.